Keith Moore admires the work of natural history illustrator George Edwards, and discovers how some of the specimens he depicted were captured en route to the collections of a French courtesan.

An outstanding artist of natural history subjects, Edwards’s plates are etched and hand-coloured quite beautifully and it is clear from his own accounts that he would often draw directly onto the plate, a difficult trick to pull off.

Treasure on the high seas in the swashbuckling days of the eighteenth century wasn’t always the usual boring chests of Spanish Main gold. It might be scientific booty too, and that was certainly the case for naval officer Washington Shirley FRS (1722-1778), then RN, but soon to be the 5th Earl Ferrers. One of Shirley’s French prize captures contained the bonus of American birds intended for the accomplished Jeanne Antoinette Poisson, Marquise (or Madame) de Pompadour (1721-1764). Instead, the collection became raw material for that greatest of bird illustrators, George Edwards FRS (1694-1773). 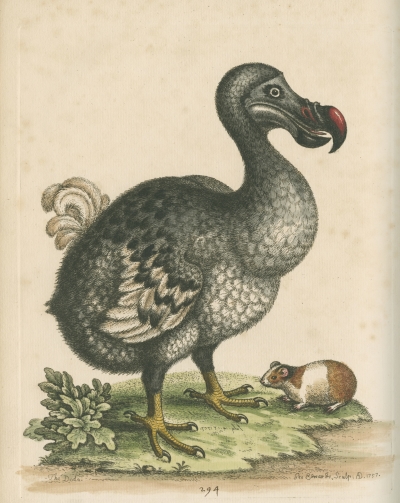 I’ve been spending quite some time with Edwards lately, scanning and cataloguing his three-volume Gleanings of Natural History (1758-1764) for inclusion on our picture database, and he’s a terrific companion. An outstanding artist of natural history subjects, Edwards’s plates are etched and hand-coloured quite beautifully and it is clear from his own accounts that he would often draw directly onto the plate. You realize what a difficult trick that is to pull off when you look at the occasionally mirror-written captions: the drawing would be reversed in printing and Edwards had to allow for that in his compositions.

Those captions might say that works were drawn 'from life', but of course Edwards intended to mean that he was working directly from a subject that may or may not have been flapping, hopping or trotting about. Pickled bird skins would have been most usual and it was the artist’s task to animate them. George Edwards’ birds soar off the page and he wasn’t one for wasting copper plate. If he could, even for decorative purposes, he would shoehorn together the most unlikely creatures. While one might assume that he was being naive, I don’t think so. I like to think that Edwards was alert to visual humour, so that his dodo, paired with an equally rotund guinea pig (above), irresistibly reminds me of Lewis Carroll (who, a century later, would be inspired to include an Edwards-style dodo in Alice’s Adventures).

Because the etchings are so good, George Edwards’s supporting text is sometimes overlooked. However, he almost always has something interesting to say, particularly on the provenance of his specimens. Edwards had a wide range of social contacts, such as Earl Ferrers, who owned collections, but he managed to find stuffed animals in coffee-houses and live ones in London’s fairs. He includes behavioural notes: I particularly liked the account of him taking his own macaque to Bartholomew Fair, where they found another lonely animal, 'a female of the same species … larger by half than mine, which I carried to compare with it: they seemed highly pleased with each other’s company, though it was the first time of their meeting…'

Much of the third volume of Gleanings of Natural History is based upon specimens ‘liberated’ by Ferrers and the book is dedicated to him by Edwards. As for Madame de Pompadour, I doubt if she would have minded the loss of her feathered friends. She was, after all, a great patron of science and one of my favourite things in our collections is a copy of Thomas Sprat’s History of the Royal Society (1667) that belonged to her and which still bears her coat of arms. She certainly would have appreciated the artistry of the Gleanings. Did she see it, I wonder? I really hope that she did, because George Edwards, in a touchingly romantic gesture, named one of his subjects in her honour: the splendid Pompadour cotinga Xipholena punicea (below): 'It being a bird of excessive beauty, I hope that the lady will forgive me for calling it by her name'. Its plumage was in her favourite colour of purple. Jeanne Antoinette died, just forty-two, in the year in which the book appeared. 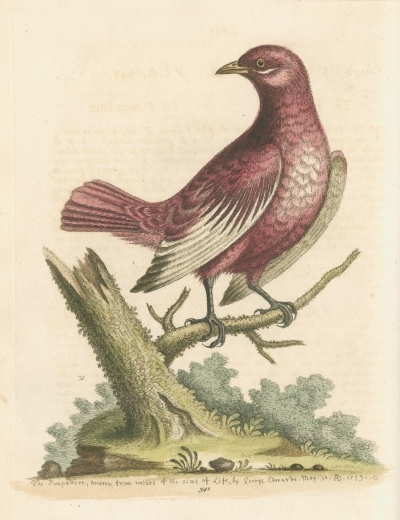