Keith Moore meets the blue lizards of the Faraglioni Rocks, studied by husband and wife team Theodor and Anna Eimer in the 1870s.

Eimer’s 1874 monograph describes this blue variant and attempts to explain it in terms of its environment: the Faraglioni have no vegetation and therefore more bluish-tinted reptiles would better survive airborne predation since these individuals are closer to the natural rock colour.

It’s always nice to see an old friend, especially in an unexpected place. I was very pleased, therefore, and slightly surprised, to see a fine illustration of this little lizard in one of the Society’s rare books. 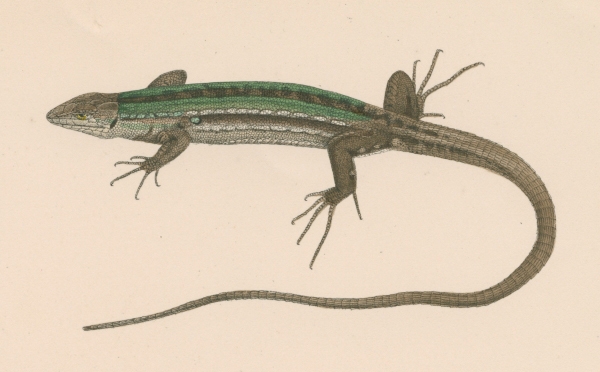 If you’ve spent any time at all in southern Europe and the Mediterranean, you’ll recognise immediately the wall lizard Podarcis muralis, varieties of which are pretty well distributed all over the region. It’s hard to avoid the little green-and-brown creature, basking on rocks, vanishing into wall crevices or running around in gardens. Hence the unexpectedness of seeing it in a rather beautiful natural history lithograph: who would write about something so ordinary?

Of course I shouldn’t have been too surprised at all. Ever since Charles Darwin set foot on the Galapagos and later started thinking about finches and the like, zoologists have loved island populations of common things. That includes some uncommon things closer to us too: one shouldn’t forget that Homo floresiensis was found on an island. But in the case of my wall lizards it was a nineteenth century researcher, Theodor Eimer, who began to study them and have them drawn.

Eimer’s main interest was their relationship to something very unusual and only found in one particular place. On the Faraglioni Rocks off the island of Capri in Italy, these lizards aren’t green at all, but have evolved into a rather snazzy bright blue (Podarcis sicula coerulea). Eimer’s 1874 monograph (subtitled A contribution to the Darwinian doctrine) describes this blue variant and attempts to explain it in terms of its environment: the Faraglioni have no vegetation and therefore more bluish-tinted reptiles would better survive airborne predation since these individuals are closer to the natural rock colour. 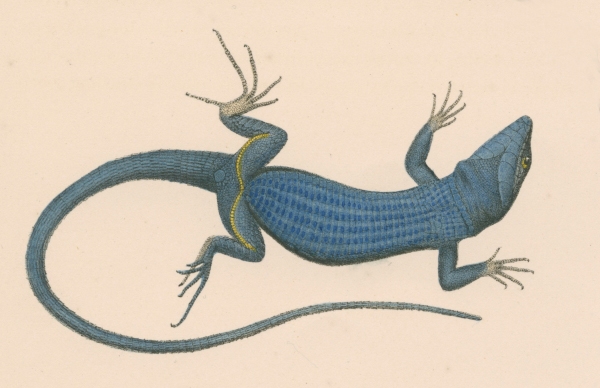 Gustav Heinrich Theodor Eimer (1843-1898) was Professor of Zoology at the University of Tübingen and a proponent of orthogenesis, the idea that evolution might proceed in particular directions as opposed to the purely random variations of natural selection. Rather appropriately, for a splendidly bewhiskered Victorian, Eimer’s name was given to the nasal sensory organs of the mole, which he studied. He married Anna Lutteroth (b.1851) of Hamburg and one little detail on the plates that almost escaped me is that the reptiles were drawn by her, as Anna Eimer. It was an immediate collaboration: as soon as they married in 1870 Theodor saw service as a Franco-Prussian war surgeon, with Anna working as an army nurse. Invalided, Theodor recuperated on Capri in 1871, the first of several visits the pair made to the island, for its azure seas and remarkable blue lizards.