Today Ivan Christov and Pedro Jordan talk about a lesser known paper by a groundbreaking scientist.

A landmark paper in the Transactions 148 years ago laid down, in one fell swoop, the foundations of the kinetic theory of gases, the wave theory of heat conduction and the theory of viscoelasticity.

Many would associate James Clerk Maxwell FRS with his groundbreaking (“great guns” as he called it in a rare moment of unveiled exuberance) paper “A Dynamical Theory of the Electromagnetic Field,” published in the Transactions 150 years ago. However, barely a year later, in 1866, Maxwell submitted another manuscript to the Transactions, entitled “On The Dynamical Theory of Gases” (DToG).

In this seminal work, published in 1867, Maxwell laid the foundations of what is known today as the kinetic theory of gases. With an inspiring discussion of the Roman philosopher Lucretius’ musings on the microscopic world as his jumping-off point, Maxwell described a gas, one of the four fundamental states of matter, as a disordered collection of “tennis balls” bouncing around in an agitated fashion. He then proceeded to ask and provide the first answer to the question of how one might connect macroscopic quantities, such as the pressure, density and temperature of a gas, to this underlying motion.

From considerations of two molecules colliding to two interacting systems of many molecules, Maxwell provided the first heuristic derivation, in equation (27), of what has become known as the Maxwell–Boltzmann distribution, now considered a fundamental result in physics. 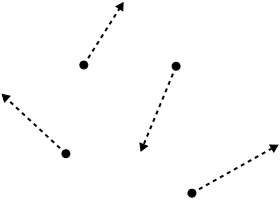 Continuing this line of thought, Maxwell pursued the metaphor of molecules as bouncing balls further to describe the transport of heat in a gas as a consequence of these molecular collisions. In doing so, he obtained equation (143); a new relation between the flux of heat and the temperature gradient. This relation is noteworthy in that it contains, as its first term, the time rate of change of the heat flux, which Maxwell immediately (and justifiably for the case before him) discarded with the comment “. . . as the rate of conduction will rapidly establish itself.”

Unfortunately, the implications of equation (143) remained unexplored until the work of Carlo Cattaneo, 81 years later, revived the idea of accounting for the time rate of change of the heat flux, and thus the notion of a thermal relaxation time (i.e., the time over which the heat flux equilibrates to being proportional to the temperature gradient). Perhaps the most significant consequence of what has come to be known as Maxwell—Cattaneo (MC) theory is that heat can spread at a finite speed, in other words, as heat waves, an experimentally verified phenomenon also known as second sound.

Maxwell’s idea of thermal relaxation has been particularly influential in our own research, as we’ve investigated nonlinear heat waves in materials with temperature-dependent properties (e.g., metals at low temperature) and the inability of certain newer heat conduction models to correctly capture the physics predicted by MC theory.

Lastly, DToG also laid the foundations of what today is known as viscoelasticity. On page 52, Maxwell introduced a relationship between the stress and strain of a deforming body that includes a relaxing restoring force. Although Maxwell had solids in mind, this relation is now fundamental to the theory of non-Newtonian fluids, whose ability to respond like both fluids and solids (e.g., the Maxwell material “flubber”) makes for entertaining demonstrations.

Here’s to Maxwell’s “other” upcoming sesquicentennial!