"Our work is a starting point to developing bioinspired “instant” anchorages of cable-like structures to a range of substrates, finding better attachment solutions for technological applications."

Spiders build webs, shelters and egg sacs from fine tough silk fibers. To apply these fibers, they must be properly attached to substrates or other threads and must cope with loading in highly-variable directions.

A recent paper published in Journal of the Royal Society Interface found that spiders “print” silk in a specific way in order to enhance the robustness of silk thread anchorages. This research could help to understand the evolution of silks and webs, and to enhance the performance of adhesive tapes. We asked the authors some questions about their work.

Jonas Wolff: I gained much of my education from an inspiring time in the Functional Morphology and Biomechanics lab at the University of Kiel. I initially worked on hairy adhesive foot pads that help a variety of wandering spiders get a grip on various surfaces without any glue – similar to what is known about the gecko.

I was fascinated by how spiders solve most problems with silk, and have even evolved a toolkit of silks with tailored properties for the different purposes. This, together with my background in biomechanics and biomaterials, ultimately led to an attraction to the big topic of spider silk.

Mariella Herberstein: I am interested in the biology of spiders in general, and if you are interested in spiders, you have to be interested in silk. Silk facilitates most of a spider’s life from foraging and mating to reproduction and movement. I bring to this research an ecological and evolutionary perspective, asking how the different ecologies that spiders occupy result in the evolution of different silks or in different way of arranging silks. 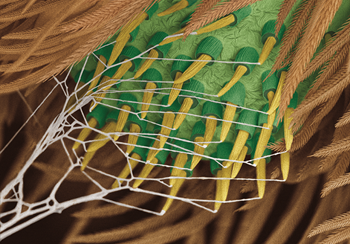 What’s a spider attachment disk, as mentioned in the paper?

Jonas: When you keep spiders in transparent containers you become aware of tiny white dots deposited on the walls of the enclosure. This is where the spider has attached its threads to keep it in place. A look under the microscope reveals that these discs are not simply a deposit of a glue-like material, but a minute web of silk nanofibers with a glue coat. Exactly why a spider uses these attachment disks instead of a blob of glue to fasten its threads is one of the main questions we want to solve.

Jonas: While there has been a strong research focus on spider silk for last 20 years, it’s all about the structural threads now. We need to look at other tools in the spider’s toolbox – fundamental both for our understanding of the biology of spiders and the evolution of spider silk as a super-material.

In this study we wanted to gain an understanding of how orb web spiders produce tough anchorages. Attachment discs have previously been regarded as tape-like structures. If you peel off a tape from a surface it’s much easier if the angle at which you are pulling at is higher relative to the substrate.

We found that the silk anchorages of orb web spiders are highly robust against pulling in different directions; the pull-off resistance is only slightly reduced when pulling perpendicular to the surface, and there is even no difference in resistance whether pulling along or against the orientation of the main thread.

This is due to the specific way in which spiders “print” silk into a three-dimensional attachment microstructure. We found that the key for a high-pull of resistance is the location of the point where the structural thread enters the attachment disc, and its flexible joint with the substrate. This is achieved by a two-step back-and-forth spinning pattern during the rapid production of the adhesive plaque, which shifts the thread insertion point towards the plaque center forming a flexible tree root-like network of branching fibers around the loading point.

The spinning system of spiders can be regarded as a micro-3D-printer that is capable of adjusting the mechanical properties of its product through structure; very appealing for future biomimetics.

Why is this important? How might this work inspire materials development?

Jonas: From the biological point of view, this is a starting point to further investigate how spiders apply attachment discs and how this affects the structure and function of webs and draglines. We think that attachment discs are key to understanding how efficient webs and tough silks evolved, because they enable a versatile use of the silk fibers.

From the technical point of view, there are many lessons to learn from how spiders attach threads. A spider attaches its thread within seconds without any treatment of the substrate surface. Our work is a starting point to developing bioinspired “instant” anchorages of cable-like structures to a range of substrates, finding better attachment solutions for technological applications.

Is there a particular species of spider you mostly work with? And if so, why?

Jonas: In this work we used the golden orb weaver Nephila plumipes. It is a beautiful spider, which spins enormous webs of golden shimmering silk. Spiders of this genus have been established as model species in silk research; they are highly abundant on and around our university campus, and fairly sized, which facilitates the manipulation and measurement of their silk anchorages. 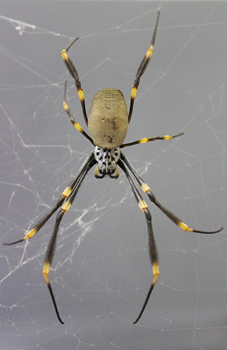 Jonas: We want to look at the glue material and its adhesive mechanism in more detail, comparing the mechanics, structure and spinning patterns of silk anchorages in spiders with different evolutionary history and ecology. We are also working on the transfer of our findings to applications, like adhesive tapes, glue applications and non-mechanical attachments of cable-like structures.

Jonas Wolff is an early career researcher with a background in arachnology, biomechanics and materials research. Since January 2016, he has been a Macquarie Research Fellow at the Department of Biological Sciences at Macquarie University, Sydney, studying silk anchorages in spiders.

Mariella Herberstein completed her PhD at the University of Vienna, followed by a post-doc at the University of Melbourne. She joined Macquarie University in 2001, as an academic in the Department of Biological Sciences. From 2012 to 2015, Mariella was the Head of Department and from 2015 to 2016, Deputy Dean for the Faculty of Science and Engineering. Since May 2016 she has taken on the Chair of Academic Senate. Her research focuses on the behaviour of spiders.