A hard nut to crack….

Dr Madhur Mangalam from the University of Georgia tells us more about his paper on wild bearded capuchin monkeys' nut-cracking hammer trajectories.

The transition from occasional to obligate bipedalism is a milestone in human evolution. A recently published Proceedings B article ‘Bearded capuchin monkeys use joint synergies to stabilize the hammer trajectory while cracking nuts in bipedal stance’ found that while cracking nuts using massive stone hammers, wild bearded capuchin monkeys (Sapajus libidinosus) produce hammer trajectories with highly repeatable spatial profiles. The monkeys used strong joint synergies to stabilise the hammer trajectory while lifting and lowering heavy hammers and stringently controlled the motion of the foot. Dr Madhur Mangalam from the University of Georgia tells us more about his paper.


Millions of years ago, before humans became fully bipedal, ancestral hominins used stones as hammers to process hard food items such as bones and nuts, probably while standing upright. However, because the fossil record is fragmentary and reconstructing behavior from fossils is difficult, changes in the motor control strategies that accompanied the transition from occasional to obligate bipedalism remain unknown. Among contemporary nonhuman primates, bearded capuchin monkeys spontaneously use stones as hammers to break nuts. These monkeys adopt a bipedal stance while using percussive tools and thus provide a unique reference point to clarify one aspect of the transition from occasional to obligate bipedalism, which is, maintaining bipedal stance while handling massive objects.

Capuchin monkeys at EthoCebus field site at Fazenda Boa Vista, Brazil carry hammers bipedally to anvils and stand bipedally while using hammers. They presumably solve significant biomechanical and postural challenges in lifting and lowering massive hammers while cracking nuts in a bipedal stance. We found that these monkeys produce hammer trajectories with highly repeatable spatial profiles. They move segments of the body synergistically to stabilize the trajectory of large hammer stones (> 50% of their body mass) in bipedal stance rather than controlling the segments individually. The monkeys stringently control the motion of the foot. They control the motion of the lower arm and hand rather loosely, showing a greater variability across strikes in the movement of these segments than of the foot. Such synergies are indicators of highly skilled movements in humans such as walking.

Our findings show that while standing bipedally to lift and lower massive hammers, an arboreal quadrupedal primate such as a capuchin monkey must control motion in the joints of the lower body more stringently than motion in the joints of the upper body. As fossils do not preserve movement strategies, our findings provide a novel perspective on an unknown facet of hominin evolution. Synergies like those evident in capuchin monkeys may have accompanied the evolution of bipedality in ancestral hominins. 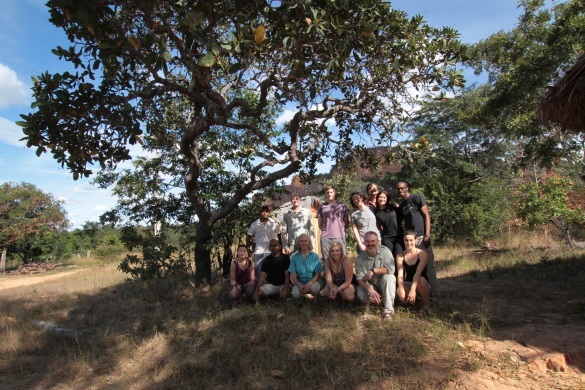 Tell us more about yourself?

I defended my Ph.D. in August, 2018 under Prof. Dorothy M. Fragaszy in the Behavior and Brain Sciences Program at the Department of Psychology, University of Georgia. Prof. Fragaszy is Co-Director of the EthoCebus Project, a project concerning the behavior and ecology of wild bearded capuchin monkeys (Sapajus libidinosus) in Piauí, Brazil, living in cerrado habitat (open woodland). These monkeys routinely use stones to pound open palm nuts and other hard fruits they place on stone and wood anvils. The objective of our research is to identify the monkeys’ patterns of coordination of movement while using stone hammers to crack open nuts. This work situates the monkeys’ nut-cracking skill in the perception and action framework. This research provides a complementary perspective to the current predominantly cognitive framework applied to the study of tooling behaviors in nonhuman animals. The goal of our ongoing research is to advance the study of movements of nonhuman animals in natural settings using state-of-the-art analytical techniques of movement biomechanics and motor control that until now have only been used to study human movement in laboratory settings.


The author also shared his thoughts on publishing in Proceedings B

“Our experience with publishing with Proceedings B has been pleasant. We appreciate the Editor’s effort in communicating how to improve our manuscript. The reviews were very thorough and I appreciate the quality of the typesetting that Proceedings B does for it authors. Articles published in Proceedings B are aesthetically pleasing. I expect to submit my future work to Proceedings B”.

Proceedings B is looking to publish more high quality research articles and reviews covering the field of animal behaviour If you have an idea for a review, we strongly encourage you to submit a proposal by completing our proposal template and sending it to the journal. Find more information about the journal and the submission process.