At dusk in the graveyard

Rupert Baker hears the story of statistician Zachary Macaulay FRS and his role in the abolition of the slave trade.

Deeply affected by his experiences in Jamaica, Macaulay came under the influence of William Wilberforce on his return to England.

It’s nearly Halloween, so here’s a tale of an occurrence in a disused cemetery…

I’ll pull the rug from under your spooky expectations straight away (boo!), as this is an inspiring story rather than a ghostly one. A couple of weeks ago, Jon and I were invited to St George’s Gardens, one of those little oases of tranquillity you find tucked away between busy London streets. Now, you may remember that the letters ‘FRS’ on a plaque are catnip to this particular librarian, so the chance to be present at the unveiling of a new memorial stone was too good to resist, and saw us heading up the Piccadilly Line to Russell Square after Library closing time.

The plaque in question is a memorial to Zachary Macaulay FRS (1768-1838), a statistician elected to the Royal Society in 1821 and resident in Mecklenburgh Square, just around the corner from St George’s Gardens, at the time of his death. His body lies in the Gardens, which served as a public burial ground from 1713 to 1855, but the exact location of his plot is unknown.

While there’s already a memorial to Macaulay in Westminster Abbey, the Friends of St George’s Gardens wished to honour their distinguished local resident with a plaque closer to home. The Royal Society made a financial contribution, as did the Friends, the Royal Statistical Society, UCL and the Clan Macaulay Association, and representatives from each group assembled in the Gardens as the sun dipped below the horizon on a mild October evening. Jon and I were rather envious of the matching tartan outfits worn by Clan members, and we’ll definitely be pushing for the creation of an official Royal Society tartan, bearing in mind the high percentage of Scots in our early Fellowship and the timing of our Anniversary Day celebrations on St Andrew’s Day.

Anyway, here’s my snap of the plaque, on its wall on the north side of the Gardens – my phone camera isn’t great in crepuscular light, and flash would have been intrusive, so please forgive the slightly grainy images which follow: 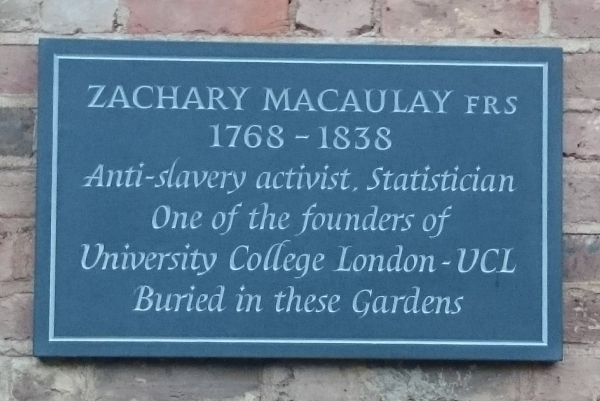 After a dedication by the local parish priest (with grateful thanks to us as ‘The Royal Academy’ – it happens, let it go), two actors took the stage, dressed as Zachary and his wife Selina. While giving due weight to Macaulay’s mathematical and college-founding achievements, the focus of their story was his role in the abolition of the slave trade. We were treated to the inspiring tale of how a young man with a basic education left home (and his unsavoury Glaswegian drinking companions) at the age of 16 for a job on a sugar plantation in Jamaica. The year before his arrival, 1783, had seen the legal wrangling in London following the horrific Zong slave massacre, one of the stimuli for the abolitionist cause. 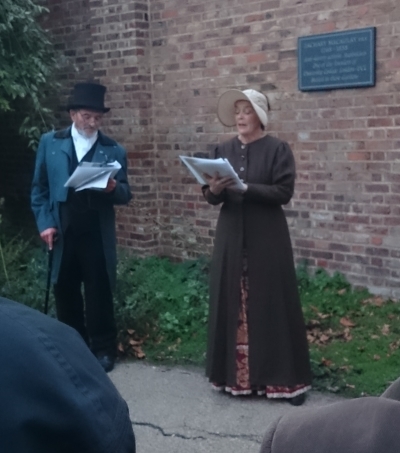 Deeply affected by his experiences in Jamaica, Macaulay came under the influence of William Wilberforce on his return to England, later joining the Society for the Abolition of the Slave Trade and serving as secretary of the African Institution. While the slave trade was made illegal in the British Empire in 1807, the possession of slaves was still permitted, and Macaulay was one of the campaigners who worked tirelessly towards full abolition, using his statistical expertise to compile reports detailing the iniquities of the practice. The 1820s saw his election to the Royal Society and his founding role, in 1823, in the Society for the Mitigation and Gradual Abolition of Slavery, which led to the total abolition of slavery in the British Empire ten years later.

Macaulay’s tale and its aftermath was told first in the Gardens and then, when darkness fell and the gates were locked, continued in Goodenough College in Mecklenburgh Square. Here, we heard from a representative of Anti-Slavery International, founded in 1839 and now the world’s oldest human rights organisation, who provided a sobering reminder that the work begun by Wilberforce, Macaulay and other pioneers still has a long way to go.

The evening opened our eyes to the continuing fight against slavery, as well as detailing the fascinating tale of a Fellow whose name I’d only previously heard in passing, and we were still enthusing about Zachary Macaulay as we left Goodenough College for the darkness of the Gray’s Inn Road (now there’s a prime location for spotting the undead). Do pay a visit to his new plaque in St George’s Gardens, and take the time to explore the lovely surroundings – and who knows, he could be right beneath your feet as you walk…