Did an Egyptian chameleon, painted by Richard Waller and supposedly owned by Robert Boyle, ever find its way into the Repository of the Royal Society? Louisiane Ferlier looks at the tangled evidence in the archives.

Perhaps I was chasing a ghost lizard, since the drawing itself seems to be a composite between several chameleons…

In September 1763, the recently appointed Library and Repository (museum) Keeper, Clerk and Housekeeper of the Royal Society Emanuel Mendes da Costa (1717-1791), lamented the state of the Society’s collections in the strongest terms:

‘I immediately proceeded to work, but such was the state of the said Libraries and Museum, that I am inclined to think the Augean stable was but a type of them and I have often thought that this Augean stable of mine, not only surpassed that which is recorded as one of Hercule’s labours, but … [was] much beyond the other Eleven Herculean labours added to it.

‘Before the Inspectors could proceed, I was obliged to clear all the Lava of the Volcano’s Neglect and Ruination, which had cover’d many even buried the Books & curiosities this after many weeks work, amidst the repeated Curses of Myriads of Spiders and other Vermin, who had held peaceable possession (without a peppercorn rent) for a long series of years, I accomplished so that thank God, now both Libraries and Museum are accessible, and in a state fit to be consulted by the Curious.’ (MS/783/63)

If anyone ever wonders why we’re proud to work with the Royal Society’s collections, here you have it: we get to follow in the footsteps of a (somewhat shady) archival Hercules! To me, da Costa’s vivid account should top Zacharias Conrad von Uffenbach’s oft-quoted description of the collections in the eighteenth century. Not necessarily because it’s more accurate, as both men had agendas for playing up the chaos, but because it comes from one who actually produced tangible archival material that allows us to recreate what was and wasn’t in the rooms of the Society at its home in Crane Court.

At the Annual Meeting of the American Society for Eighteenth-Century Studies (ASECS) held in Denver a few weeks ago, I got to discuss the contribution of those who catalogued the collections as part of a panel on collecting studies organized by Dr. Bénédicte Miyamoto (Paris III – Sorbonne Nouvelle).

It’s well known that the Royal Society archives were built on the phenomenal effort of early Fellows to record everything. But I wanted to shift the focus away from more famous figures such as Robert Hooke or Nehemiah Grew, to the too often ignored ones at the front line of collection [re]organisation: Henry Hunt, Alban Thomas, Francis Hauksbee the Younger, John Robertson and Emanuel Mendes da Costa.

But where and when do the chameleons come into play, I hear you ask impatiently?

It all started with a query I received from one of our frequent readers: did I know whether the actual Egyptian chameleon supposedly owned by Robert Boyle, and so skilfully painted by Richard Waller, had been preserved in the Repository? 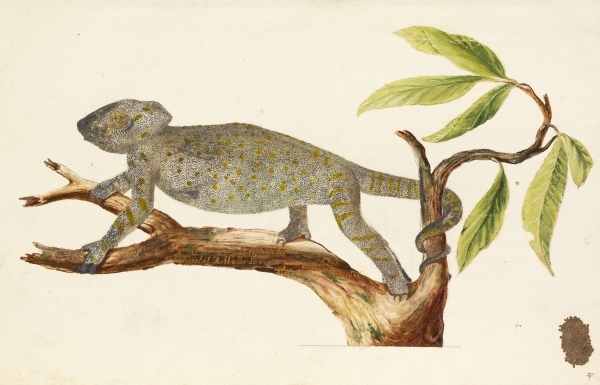 To understand how the archives, library, painting collection and Repository of the Society functioned in the apocalyptic state described by da Costa, I had already chosen to look through our manuscript inventories for one item in each of those categories, and therefore chose the chameleon to test the collection of natural specimens.

My first source to answer the question was Nehemiah Grew’s Musaeum Regalis Societatis (‘a Catalogue & Description of the Natural and Artificial Rarities belonging to the Royal Society and preserved at Gresham College’). Under the heading Oviparous Quadrupeds, pages 41 and 42, Grew listed three chameleons introduced as:

The description of the third, ‘black, yellow, and ash-colour mixed together’ seemed to tie in with the palette of colours used by Waller, and with the dried piece of skin he added to the bottom corner of the picture. Unfortunately for my purposes, Grew’s cataloguing philosophy does not record the provenance of the items as it reflects instead the original intentions of Fellows to collect natural specimens representative of their species. The first capitalised CHAMÆLEON is for instance given particular prominence because it corresponds to the textbook description.

Provenance, however, is recorded in the Journal Books of the meetings and in some of the manuscript inventories put together by the keepers or the various commissions formed to investigate the repository. 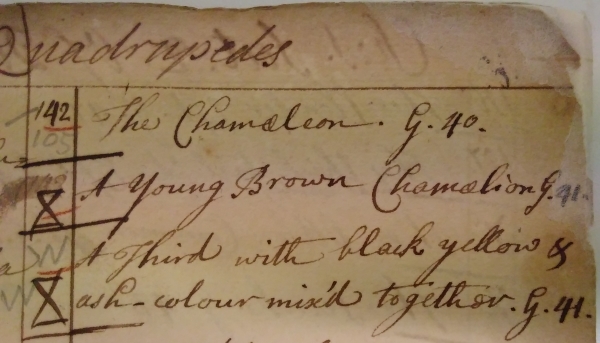 MS/413, Catalogue of the Repository of the Royal Society, late eighteenth century

Some catalogues, such as MS/413 (above), exactly copied Grew’s description citing the reference, then the repository keepers could tick if they saw the specimen. You can see that in folio 11 the CHAMÆLEON has been given additional numbers (142, then 105), whereas the other two are marked with an X accompanied by a letter N and W. Maybe this corresponded to a shelving system?

MS/416 (above) functioned in a very different way to MS/413: the inventory was drawn as part of the Repository Committee and the cataloguers went instead back to the Journal Books to extract all donations. It records on folio 19 a ‘liveing chamelion’ donated on 9 October 1661 by a Mr Clayton. Alas, this did not become the pet lizard of the Society, but was entrusted to Dr. Goddard to be dissected, with an account of the dissection being later registered in the Register Book and published in the Philosophical Transactions.

MS/415 (above) turned out to be the most helpful. The manuscript is composed of cut-out pages from Grew’s printed catalogue with annotations, re-classification and re-numbering. Folio 93 describes the creature more carefully as: I. IV.2 –‘A large chameleon, from the nose to the rump, 13 inches long, the tail 15 ½ inches long. Given by Mr Clayton. Oct. 9 1661’ and most helpfully identifies it as Grew’s first specimen!

MS/417/1, ‘Inventory of the subjects of natural history in the repository of the Royal Society’, 1763

A 1763 inventory, MS/417/1 (above), only mentions two chameleons on folio 10, with number 53 listed as a skeleton. This could possibly be either Grew’s second or third example, which by then would have lost all its skin and had been framed, or the list follows up from MS/416, and the 1661 chameleon is number 52; the dead one could be a specimen donated in July 1704 by a Mr Wolf.

Having identified Grew’s first CHAMÆLEON, I was however no closer to proving whether the third was Boyle’s supposed chameleon. Eventually, the search did remind me of Waller’s source of inspiration for the drawing, Sebastien Le Clerc’s plate for the Académie Française’s Mémoires pour servir à l’histoire naturelle des animaux (Paris, 1671), which Waller reproduced in the English translation, Memoirs for a natural history of animals (London, 1688). This made me realise that perhaps I was chasing a ghost lizard, since the drawing itself seems to be a composite between several chameleons… 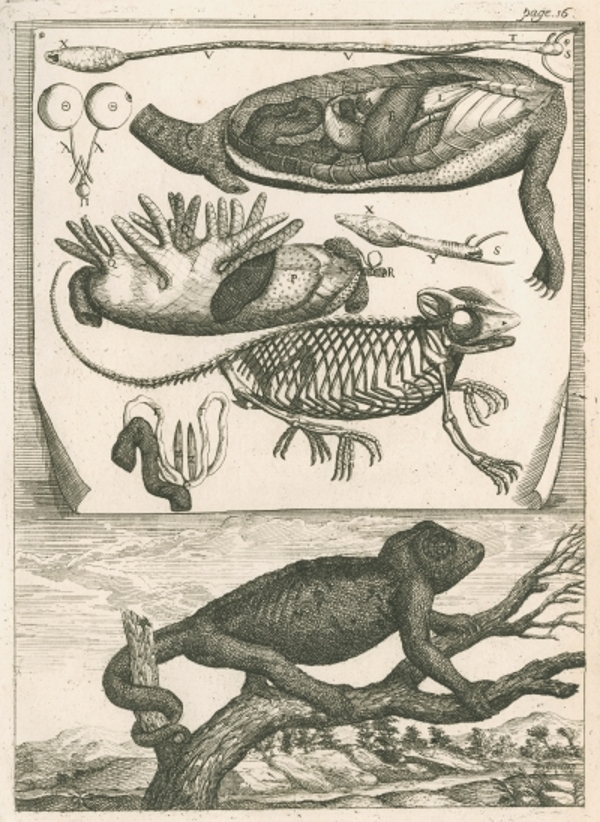 Waller’s reproduction of Le Clerc’s plate ‘Engraving of the chameleon’, 1688

The inventories have definitely proven useful to understand the evolution of the collections and its cataloguing practices, but useless in my quest to ascertain whether Grew’s third specimen could be Boyle’s Egyptian chameleon. My unsuccessful sleuthing also showed the incessant efforts of Fellows and keepers to organise the messy chaos. All in all, the chameleons were a good test to introduce the range of catalogues and methods of [dis]organisation created by the early keepers, and I hope to tell you more soon about how I fared with the paintings, books, papers and instruments!