A spot of detective work reveals that the copy of Tycho Brahe's 'Astronomiae instauratae mechanica' in the Royal Society Library may not be all that it seems...

Astronomer, supernova-spotter, alchemist, instrument-maker, Kepler’s mentor, and keeper of a pet elk that died after drinking too much beer and falling down the stairs, the Danish nobleman Tycho Brahe was certainly quite a character.

Of all the portraits adorning the walls of the Royal Society’s home in Carlton House Terrace, this one is possibly my favourite: 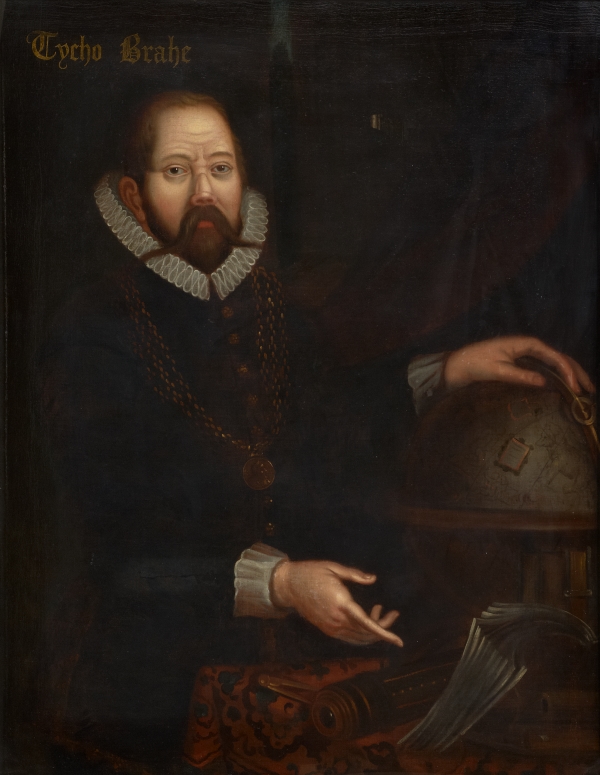 Astronomer, supernova-spotter, alchemist, instrument-maker, Kepler’s mentor, keeper of a clairvoyant dwarf and a pet elk that died after drinking too much beer and falling down the stairs, the Danish nobleman Tycho Brahe was certainly quite a character. You’ll doubtless have spotted something rather curious about that face, too: his famous metal nose, made after he lost the original in a swordfight in the dark with his cousin, following an argument over who was the better mathematician.

The painting itself has an interesting provenance. Almost certainly done posthumously – Tycho died in 1601, a few years before the invention of the telescope that he’s indicating with his right hand – it was owned by the first Astronomer Royal, John Flamsteed, and donated to the Royal Society as part of a bequest from Flamsteed’s wife Margaret.

We also possess a copy of the Astronomiae instauratae mechanica, a book in which Tycho described the instruments he used in Uraniborg (castle of the heavens) and Stjerneborg (castle of the stars), the observatories on the island of Hven where he compiled the most accurate celestial measurements yet recorded. Most of the illustrations are woodcuts, such as the sextant and zodiacal armillary sphere shown here: 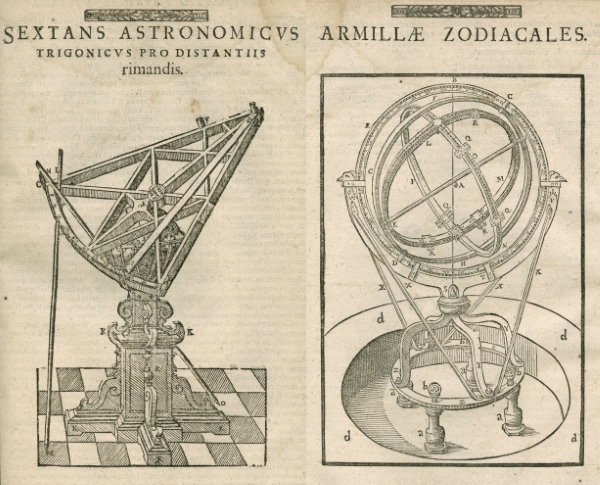 but finer engraved copper plates were used to depict the real, er, stars of the collection, such as the globe: 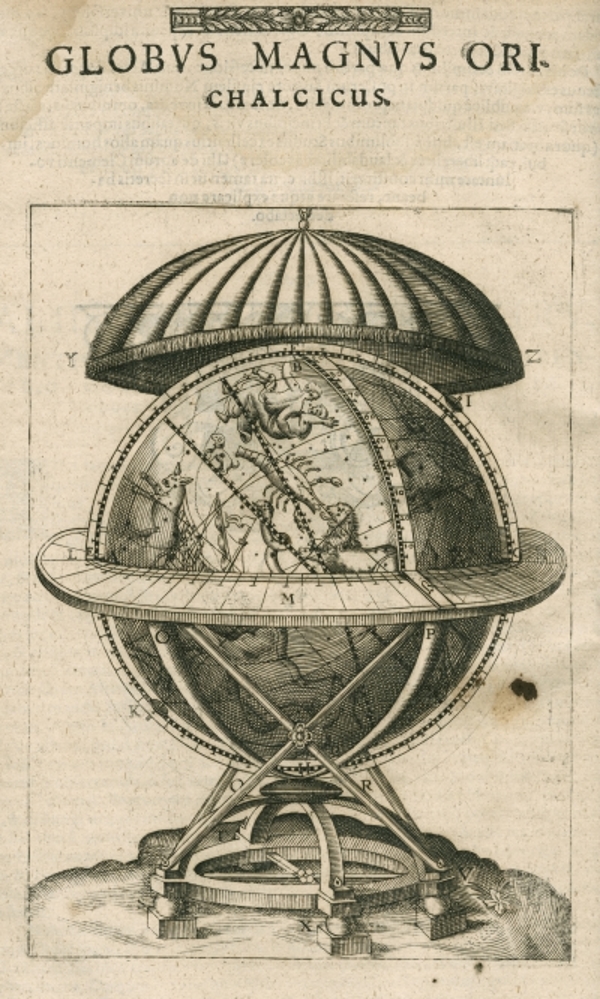 and the great mural quadrant – an iconic image of pre-telescope astronomy, notwithstanding the fact that the artist was obviously better at drawing instruments than he was at drawing dogs: 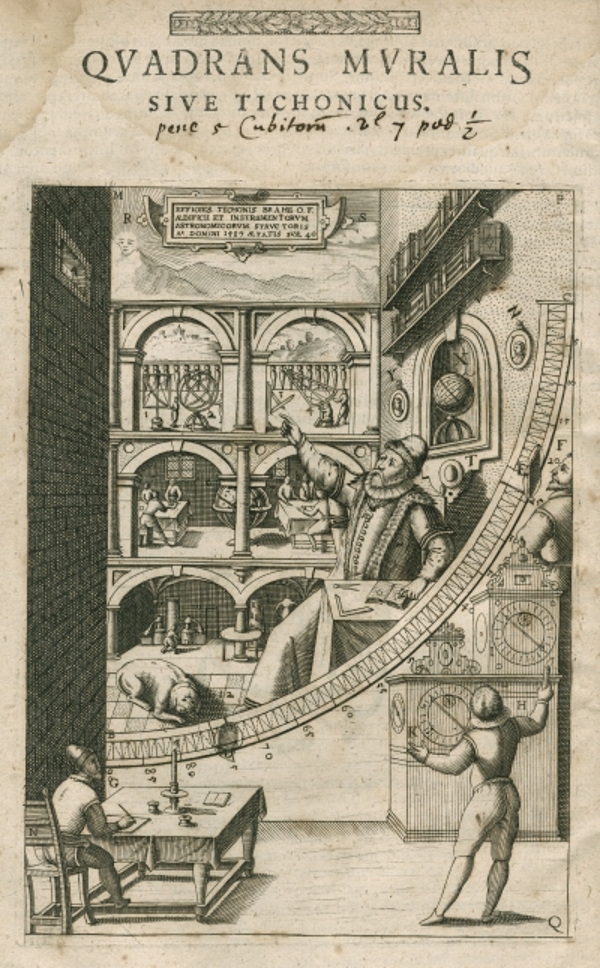 Now, going by our catalogue record, I’d always assumed that we had a 1598 first edition of the Astronomiae instauratae mechanica, printed in Wandsbeck, Hamburg. However, in a recent exchange of emails with Ruth Sargent Noyes, a researcher at the National Museum of Denmark who is preparing a census of all extant copies of the first edition, a few inconsistencies began to emerge. Why, for example, is the compass rose in the map of Hven on the right rather than the left in our copy? Why is our equatorial armillary sphere (below) an engraving rather than a woodcut? 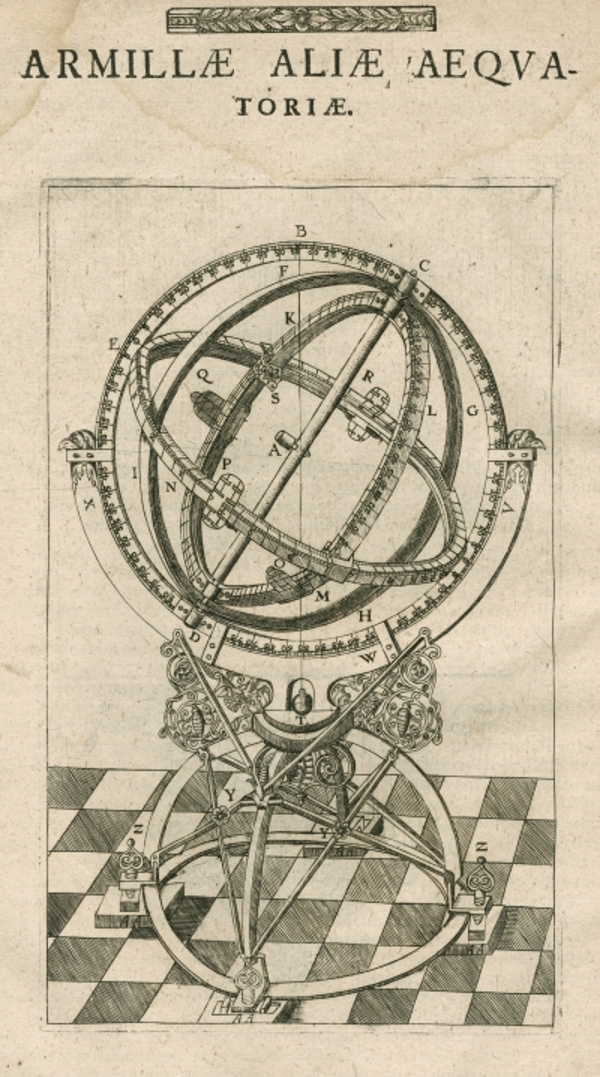 Thanks to Ruth’s detective work, we reached the only possible conclusion: we have a 1602 Nuremberg edition rather than a 1598 edition! Catalogue record duly updated, and overall Royal Society insurance coverage downgraded by a fraction of a percent – a first edition went for more than $220,000 at auction 20 years ago, the last time one came to market, whereas a 1602 copy sold last year for a mere $30,000.

Any disappointment at our ’lost’ first edition (and hypothetical financial deficit) faded rapidly – the second edition is still a spectacular work, with an interesting publication history of its own. As Ruth informed me, Tycho’s family were in dire financial straits following his death in Prague in 1601: he had married a Danish commoner for love, leaving his widow and children struggling to obtain their inheritance as the children were legally illegitimate. They were forced to sell the original woodblocks and copperplates to a local publisher, Levin Hülsius, who produced the 1602 edition in a print run of around 2000 copies, aimed at scholars and collectors.

It’s easy to see how our copy of the Astronomiae instauratae mechanica has been misdated: the title page is missing, and the title and ‘Wandesburgi 1598’ are handwritten on the first leaf, A2. The same hand appears in an inscription at the bottom of leaf A3: 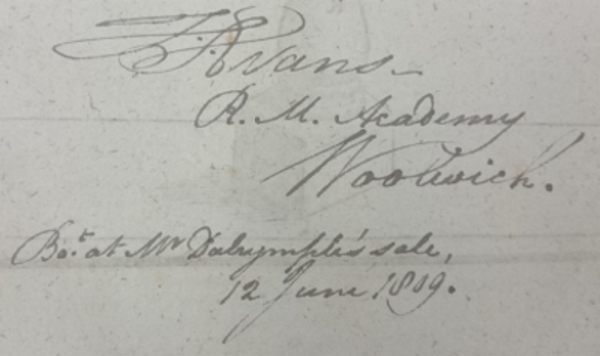 So, rather than feeling sorry for ourselves, we should maybe extend a posthumous pat on the shoulder to J.S. Evans (if I’ve deciphered that florid ownership signature correctly) of the Royal Military Academy, Woolwich, who appears to have been sold a pup ‘at Mr Dalrymple’s sale, 12 June 1809’. One can imagine the conversation: ‘Now ‘ere’s a fine upstanding soldier. Rare astronomy books? We’ve got just the thing, by that Danish chap with no nose. Yes, sorry about the missing title page, [cough] the worms had got to it. You can write the date on yourself: 1598 first edition, squire, cross my heart.’

I’ll attempt a bit of detective work to find out when the book first came into the possession of the Royal Society – watch this space. In the meantime, my thanks to Ruth for her help in correcting our cataloguing error, and if you do happen to know of an unheralded 1598 copy of Tycho’s book tucked away somewhere, to add to the 55-odd copies she has tracked down so far, please drop a line to library@royalsociety.org and I’ll pass the message on. If you’d like to donate it to the Royal Society Library, of course, we wouldn’t be completely averse to having both editions…