As I approached the last few catalogue entries, I began to wonder what the final paper in the series would contain – something typical, or would I end on a high with a particularly interesting piece of science?

Drumroll please: I’m happy to report from the archives that the Royal Society’s collection of Referees’ Reports from 1832 to 1949 is now all catalogued and available for reference!

We’ve been working on this project for the last year and believe the materials will be incredibly valuable to researchers. The collection will soon be fully digitised and made available on the Royal Society’s Science in the Making platform, so be sure to keep an eye out. 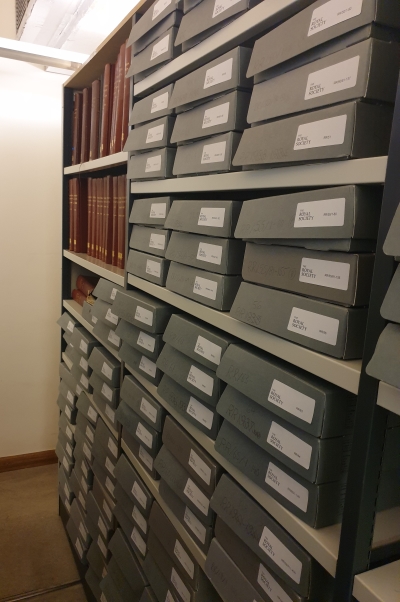 A year’s worth of cataloguing – now complete!

In total, 14,828 reports have been catalogued over the course of the year. Cataloguing this huge amount of material has been challenging, but also incredibly fulfilling, and knowing that the reports are now available to the public ensures that all the hard work was entirely worth it. The entries are very informative – as well as stating the author, referee and paper, each catalogue entry provides a brief overview of the contents of the report.

As I approached the last few catalogue entries, I began to wonder what the final paper in the series would contain – something typical, or would I end on a high with a particularly interesting piece of science? Well, the 14,828th and final report to be catalogued was about phosphagens in annelids (high-energy storage compounds in worms, if you’re asking) – not of great interest to me personally, but I’m sure it will float some worm-enthusiast’s boat. As with most of the collection, the paper was recommended for publication, although it was suggested that some minor modifications could be made.

Cataloguing reports from 1832 to 1949 has given me an insight into the scientific worlds that the authors and referees inhabited. From Darwin to Dirac, a whole spectrum of notable scientists have peer-reviewed papers, each offering their own unique takes on the subject at hand. In these reports it is often possible not just to discover their scientific opinion on the paper, but also to see personalities shining through in a way that might not be evident in their own scientific work.

I’ve written about some particularly interesting reports that I uncovered throughout the project in a previous blog post. The context in which the scientists worked is evident in the reports – particularly the First and Second World Wars, where referees were advised to specify parts of papers that ‘may be of value to the enemy’.

Perhaps the best indicator of societal change throughout the Referees’ Reports collection is the emergence of female referees. You may notice that there is a severe lack of female scientists in the collection – this is because women were not elected to Fellowship until 1945. The two elected in this year were Kathleen Lonsdale and Marjory Stephenson, with the first female-written Referees’ Report being submitted by Lonsdale in 1946. 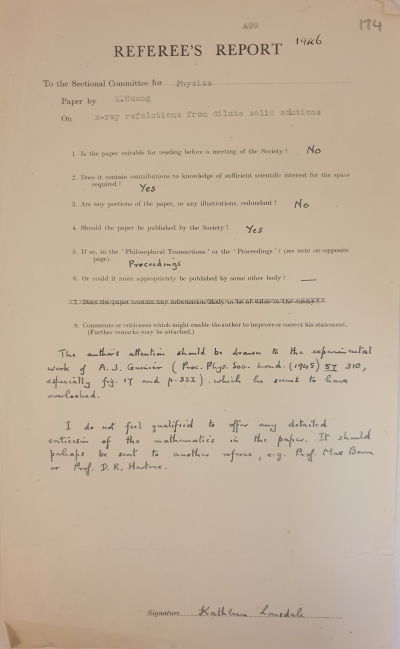 The practice of peer review within the Royal Society continues to this day and informs the papers that you read in our range of current journals. Although our project has focused on early examples of scientific peer review, the principles remain current in all academic publishing.

The next phase of the Science in the Making project is the cataloguing of early letters and papers that were sent to the Royal Society from the early eighteenth to the early nineteenth centuries. I’m sure these will prove just as interesting as Referees’ Reports, and I can’t wait to get started!