Keith Moore takes a look at some of the annotations and scribblings found within the Royal Society's collection.

If you go far enough back in time, yesterday’s vandals can become today’s research treasures.

Care for the removal of fingers, Yakuza style? Then try scribbling in a book under the eyes of a reading room librarian. I can assure you there are times when we make your average gangster look positively cuddly.

Of course, if your name happens to be Benjamin Franklin, you can get away with just about anything and, yes, one of his works in our Royal Society Library collection contains his annotations. If you go far enough back in time, yesterday’s vandals can become today’s research treasures. The odd surreptitious addition to the text stops being a paper conservation nightmare and becomes, well… history of the book.

If you use antiquarian books of any kind, you may well come across an additional pointing finger while browsing such volumes. Known as a manicule (‘little hand’) there are both scholarly studies and websites dedicated to phenomenon of readers using the sign to indicate striking or important passages of text. But the doodles I find fascinating are not the learned annotations of the well-informed, but the distractions of the terminally bored – in part, I suppose, it’s the attraction of opposites, because I’m never happier than when I have a book to read. 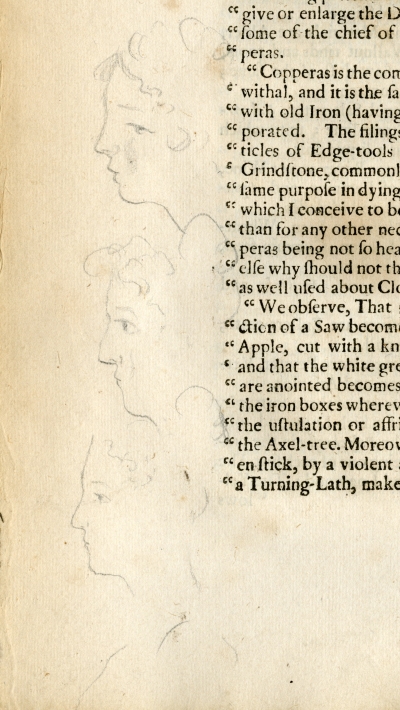 Profile portraits from Sprat’s History of the Royal Society (1667)

One of the striking things about the anonymous scrawls we find in the Society’s older volumes is how, when presented with paper, it isn’t long before the frustrated artist surfaces. For example, one of our copies of Thomas Sprat’s History of the Royal Society (1667) contains an ‘improved’ version of the famous allegorical frontispiece – a previous owner of the book copied a detail of the foot of the Society’s first President, Viscount Brouncker. Was this intended jokingly, as a footnote? Elsewhere, a variety of possible family portraits is pencilled into the margins of the book. 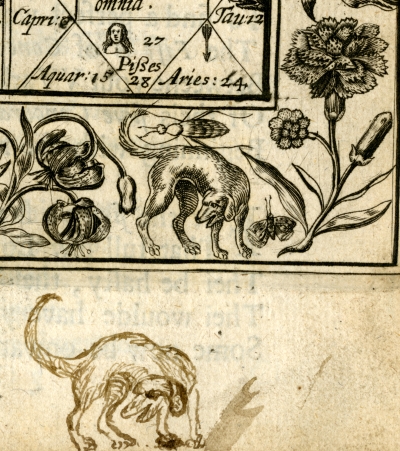 Elias Ashmole, (1617-1692) was partly responsible for the Royal Society’s coat of arms, so perhaps he wouldn’t have been too upset at the extra animals adorning his Theatrum chemicum Britannicum (1652). I don’t think anyone would describe these poor beasts as heraldic, but they are charming in their own naïve way. I do get the feeling that a young, disengaged, reader is the usual culprit – and more often than not, it’s mathematical texts that provide the best hunting ground. 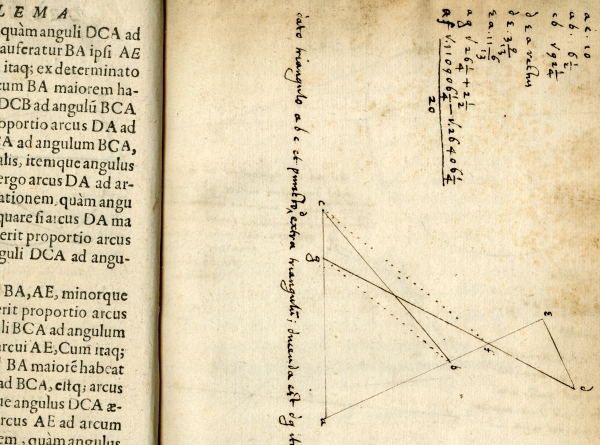 Now of course there are good maths students whose additions are clear attempts to wrestle with problems, as seen above. But then again, there are the more mischievous kind. I particularly like the initiative shown in Forestani’s Pratica d’arithmetica e geometria… (1603). The now-forgotten student sidestepped a carefully thought–out problem in optics and geometry by adding a pair of birds to the original engraving, just about to slurp up some reflective water. Problem solved. 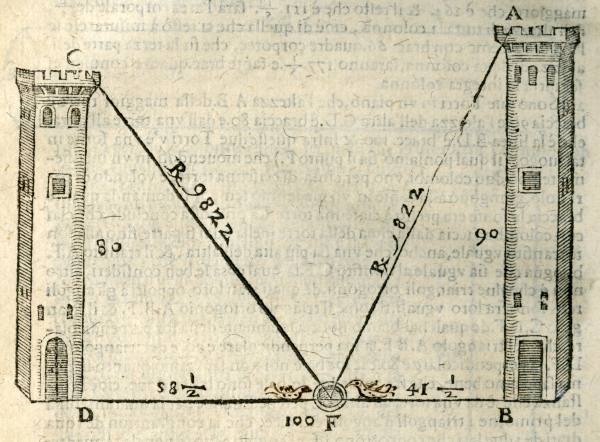 There’s something very human about wanting to personalize a much-loved book, by writing an ownership inscription or by adding a bookplate. Annotated or grangerized books can be a genuine meeting of minds between author and reader. But for drawing practice, I’d endorse the approach taken by the unknown Royal Society reader of Louis Agassiz’s Recherches sur les poissons fossiles (1843). Here, a rapidly sketched visualization of armoured fishes has been slipped into the text on an extra sheet. Much better for the book and an exciting chance find for the next reader. 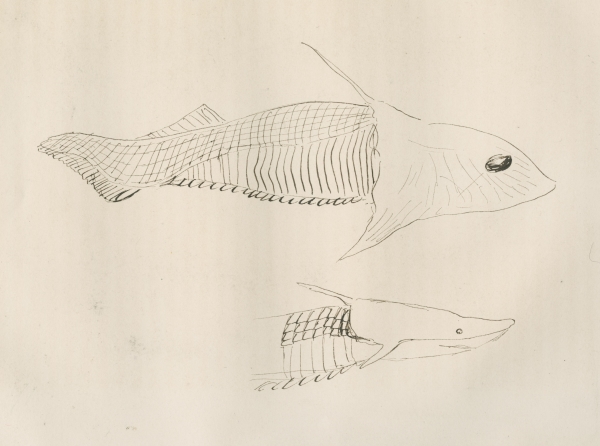 Alternatively, just buy a sketchpad – and doodle on your own paper!