Katherine Marshall celebrates the importance of the humble frog in the scientific revolution, the discovery of bioelectricity and the invention of the battery.

Luigi Galvani's discovery that electricity was the cause of muscle contraction, and that nerves send messages with electricity, laid the foundations for electrophysiology.

Lockdown life with a toddler has inspired a renewed love of nature, and I’ve been keeping a keen eye on the frogspawn in my local public gardens these last few weeks.

Rooted in childhood exploration, the metamorphosis of the frog still fascinates me. It seems I’m not alone: the winner of the first Royal Society Publishing photography competition in 2015 was Tadpoles overhead by Bert Willaert, a striking view of common toad tadpoles seeming to swim across the sky, taken from within the water. 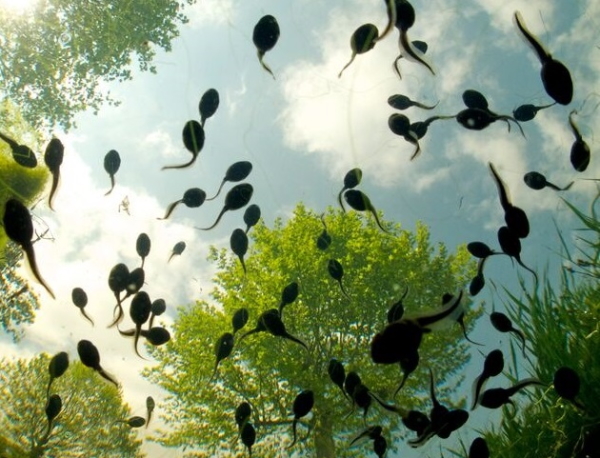 The humble frog hasn’t always been held in such high esteem, yet it played important roles in the scientific revolution, the discovery of bioelectricity and the invention of the battery, which in turn provided the literary inspiration for one of our best-known monsters.

Dutch biologist Jan Swammerdam (1637-1680) studied and experimented on frogs. The following figure is taken from a letter to Henry Oldenburg dated 14 March 1673. It depicts four anatomical studies of the lungs and coronary arteries of a frog, including blood vessels in the lung swollen with wax, a technique developed by Swammerdam for preserving specimens. Around this time, Swammerdam was working on a theory contrary to the conventional thinking of the time, which held that frogs and other lowly creatures were born of spontaneous generation and not created by God. This philosophical tradition, inspired by the work of Aristotle, believed that insects lacked internal anatomy and were generated by putrefaction, appearing out of rotting corpses.

Swammerdam’s observations on the development and growth of insects, which he published in Historia insectorum generalis (Utrecht, 1669), indicated that they originated from eggs and that their limbs grew and changed slowly. He extended this idea to frogs, the different morphing forms of which had previously been thought to be separate individual creatures. Bybel der natuure, his treatise on the subject, was published posthumously in 1737 by Herman Boerhaave FRS (1668-1738), and had a profound effect on the development of natural philosophy as well as elevating the status of the common amphibian. 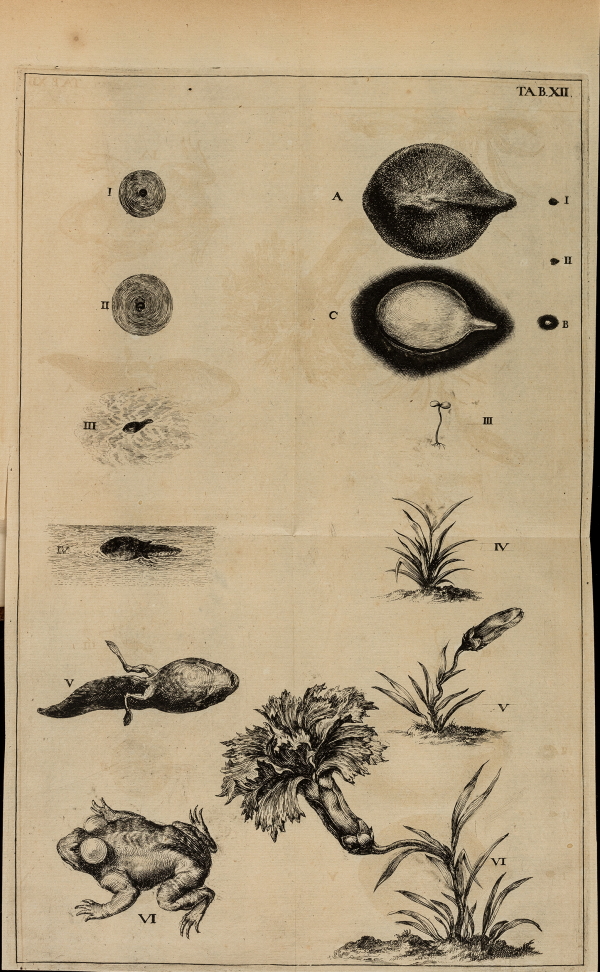 Life cycle of a frog and carnation, from Swammerdam’s Historia insectorum generalis, 1669  (RS.12611)

Another widely held idea in the early modern period was the balloonist theory of nerve function. René Descartes, developing an earlier idea that fluid flowed through nerves, believed that animal spirits flowed from the brain to the muscles and made them contract. However, Swammerdam’s experiments on frogs, in which he stimulated animation by ‘irritation’ of an exposed nerve with a scalpel, showed that a connection to the brain was not necessary for the movement of muscles. He also developed a method of measuring muscle volume which indicated no increase in size, suggesting that no animal spirit could be present. Although this proved that the muscles did not inflate, it wasn’t until the late 1700s that the true nature of nerve function was established when an Italian physician began experimenting with frogs and electricity.

Luigi Galvani established that a frog’s leg can be made to ‘dance’ using electricity, via an experiment on a dissected frog in which the frog’s legs twitched when an electrically charged scalpel was held to the exposed sciatic nerve. The discovery that electricity was the cause of muscle contraction, and that nerves send messages with electricity, laid the foundations for electrophysiology. 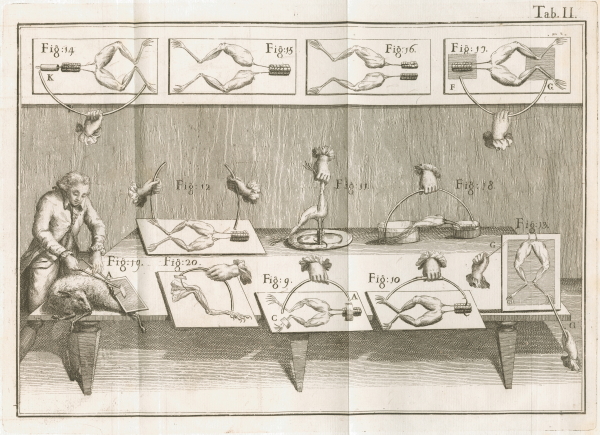 The research was communicated to the Royal Society by the noted Italian physicist Alessandro Volta FRS, who credited Galvani with the ‘most beautiful and surprising discoveries and the germ of many others’. He was unconvinced, however, by Galvani’s ‘animal electricity’ theory that the frog contained its own innate vital force. Volta repeated the experiments, noting how a circuit of two different metals caused a frog’s leg to jump without an electric charge, which ultimately led to the invention of the voltaic pile or battery.

Not surprisingly, galvanism became a widespread pursuit in the scientific community, with practical manuals showing how to perform experiments in ‘animal electricity’. It even suffused popular culture and became the inspiration for Mary Shelley’s great Romantic-era novel. Frankenstein’s wretched creature is composed of different human corpses and reanimated with electricity – a ‘regeneration by putrefaction’, if you like!