Dr Kate Hendry, Guest Editor of the Philosophical Transactions A theme issue ‘The marine system of the West Antarctic Peninsula: status and strategy for progress in a region of rapid change‘, tells us about her experience of working with the journal.

"Being a Guest Editor gave me a fantastic opportunity to correspond with people all around the world, leading to recognition on an international level."

A common myth that often surrounds the Royal Society journals is that you must be a Fellow of the Royal Society to submit your work. As much as this isn't true for authors, we also welcome all researchers to guest edit for our theme issue journals too! Guest Editing presents a wonderful opportunity for researchers to create a lasting resource for their field, and to collaborate with other academics from all over the world, all while contributing to their career progression. Dr Kate Hendry, Ocean Climate Scientist at the British Antarctic Survey, guest edited an issue of Philosophical Transactions A back in 2018, and has kindly agreed to share her experience with us.

What was your theme issue about?

The issue was about oceanic variability off the West Antarctic Peninsula. The West Antarctic Peninsula is climatically very sensitive, and is experiencing some of the most rapid atmospheric and oceanic warming on Earth. However, the regional climate and ocean conditions are also highly variable, so trying to distinguish between such warming and the oscillations that happens over timescales of years or decades is very challenging, especially when there are few long-term datasets. 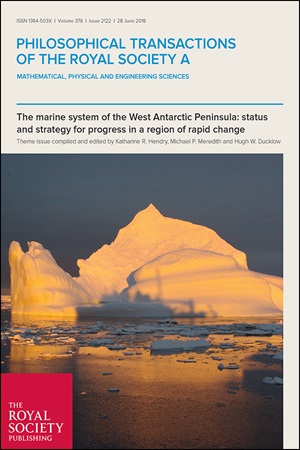 Why did you decide to Guest Edit for the journal?

I had recently taken up a role as Co-Chair of a working group of the Southern Ocean Observing System (SOOS), focusing on the West Antarctic Peninsula region. During our working group discussions, I realised the potential value in bringing together the international community in a workshop or meeting, to identify upcoming research priorities. I was fortunate to get Royal Society funding to host an International Meeting at Chicheley Hall in 2017, and additional support from Scientific Committee on Oceanic Research (SCOR) and the Natural Environment Research Council (NERC) for a larger adjunct meeting at the British Antarctic Survey. Editing a theme issue seemed a logical next step in achieving some tangible outputs of these meetings in the form of up-to-date research papers. I also wrote an article for EOS to promote the meetings, and co-authored a Progress in Oceanography paper summarising the research priorities for the West Antarctic Peninsula, led by SOOS Co-Chair Sian Henley.

What did you enjoy about the Guest Editing process?

Being a Guest Editor gave me an opportunity, together with my co-editors, to shape the issue from start to finish. In a way, it’s a privilege to be able to bring together such an exciting array of interesting researchers from around the world, and to read about their new research before anyone else. I enjoyed watching the collection evolve and the content grow, and was thrilled when the final hard-copies arrived on my desk.

What did you find challenging?

The only main challenge was having to decide how to move forward with the publication process when faced with two contrasting peer reviews. I was initially unsure about the best way to proceed, but I was able to seek further independent views about what revisions were needed, and in the process gained confidence in my own editorial decision-making.

Tell us a little bit about your current research.

My research focuses on the impact of climate change on ocean chemistry in the polar regions. Just like plants on land, marine algae need to take dissolved nutrients into their cells, which they source from seawater. The amount and balance of these different nutrients in seawater can determine how much biological production there is in the oceans – and the types of algae that grow – which has important implications for the whole marine ecosystem and for carbon storage. I specialise in the cycling of one nutrient, silicon, which is essential for a large group of algae called diatoms. Diatoms are important primary producers in both the Antarctic and Arctic, and are responsible for locking-up considerable amounts of organic matter in marine sediments. I use a wide range of geochemical techniques, including isotope geochemistry and modelling, to understand the impact of climate change on the sources and sinks of silicon in high-latitude waters.

Do you feel that guest editing for the journal has benefited your career, and if so, how?

Yes, definitely. I was a Royal Society University Research Fellow at the time of producing the theme issue, and whilst I was successfully building my group and becoming established, I still had some way to go before I was ‘where I wanted to be’ academically. I was able to add my experience as a Guest Editor – a key esteem indicator and an excellent example of a community activity – to my CV, which I used both for promotion and job applications (and, now, I’ve landed my dream job!).

What would you say to any Early Career Researchers who might be interested in guest editing a theme issue of their own?

Go for it! Being a Guest Editor gave me a fantastic opportunity to correspond with people all around the world, leading to recognition on an international level. Whilst I appreciated this at the time, it’s only now in retrospect that I realise quite how valuable the experience was given that the global pandemic, and the consequent impacts on academics and networking, were only two years away.

If an Early Career Researcher has not been a Guest Editor before (as I hadn’t), my advice to them would be to team up with more experienced scientists. However, they should make sure to take the lead and not compromise on their vision for the theme issue. I was supported by two fantastic Antarctic researchers, Mike Meredith and Hugh Ducklow, who very much let me ‘sit in the driving seat’, but were there to give valuable advice and direction when needed. Think carefully about the people you invite to participate so that you have a good breadth of the subject area covered, and keep a keen eye on diversity and the visibility of underrepresented groups.

If you would like to read Dr Kate Hendry's Phil. Trans. A. theme issue (and more content from the journal!) do visit our website. Or, if you're interested in becoming a Guest Editor for the journal yourself, why not read more about the benefits of guest editing here.