"...I think the story was relatable because it concerns our hands and tactile skin, which obviously we all have. Seeking to reproduce those artificially using 3D-printing gave it more interest and there were the robotics elements that are very topical. "

Robots and robotic technology have become increasingly commonplace over the past few decades. This field also holds huge amounts of future potential. Research published by Journal of the Royal of the Society Interface explores how artificial touch could be utilized to develop robotics with human-like dexterity. The papers explore how this technology can be applied to sensing ridges and gratings and artificial rigid textures. We spoke to the corresponding author, Professor Nathan Lepora, to find out more.

What are the unresolved questions that your papers are aiming to address?

Robot dexterity remains a pale imitation of human dexterity. While computers have been able to beat the world’s best chess players for decades, robots are unable to move a chess piece with the dexterity of a small child. Scientists know that the human tactile sense is essential for our physical dexterity, from common household chores to making sophisticated tools and instruments. Therefore, designing artificial tactile skin that has similar capabilities to human skin is considered a key unsolved step for enabling human-like dexterity in robots.

However, the human sense of touch is very complex. Each human fingertip has thousands of tiny mechanoreceptors within a layered and complex internal skin structure including hundreds of dermal papillae that protrude from the inner dermis into the outer epidermis.  In our artificial tactile skin, we 3D-printed internal structures based on the dermal papillae that look like hundreds of tiny inward-pointing pins. In human touch, two types of signals called slow adapting (SA) and rapid adapting (RA) originate from the neurons near dermal papillae. We hypothesised that artificial signals from the motion of the 3D-printed papillae would look like real neural activity.

What new insight did you discover?

This is the first time that the signals from an artificial fingertip have been compared directly with recorded neural activity. We found that our 3D-printed tactile fingertip can produce artificial nerve signals that look like recordings from real tactile neurons. Human tactile nerves transmit signals from various nerve endings called mechanoreceptors, which can signal the pressure and shape of a contact. Classic work by Phillips and Johnson in 1981 first plotted electrical recordings from these nerves to study ‘tactile spatial resolution’ using a set of standard ridged shapes used by psychologists. In our work, we tested our 3D-printed artificial fingertip as it feels those same ridged shapes, discovering a close match to the neural data. In this sense, our work helps uncover how the complex internal structure of human skin creates our human sense of touch.

These results also show that our 3D-printed artificial skin is a viable technology for an artificial tactile sense. Many different technologies are being explored for tactile skin in robotics. Our 3D-printed tactile sensor (called the TacTip) is special because its design is based on the mechanical structure of human skin. We had hypothesized that the TacTip is biomimetic because we had copied the dermal papillae structure. However, these results now provide concrete evidence from directly comparing the artificial and neural signals. 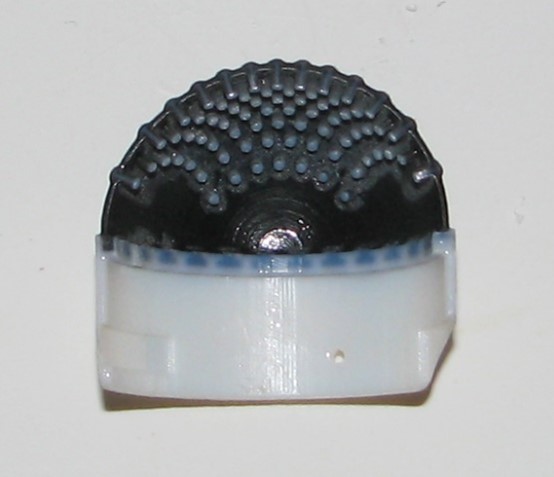 Can you comment on any real-world applications of your research?

A robot hand with the dexterity of the human hand could do any of the physical jobs and chores we do, from washing the dishes to sorting waste for recycling. There is obviously some way to go before this becomes reality. However, at present there is a huge demand from the logistics and food industries for robots that can automatically pack and handle goods. A lot of this is still done by humans because robots lack the dexterity that is needed.

Another application is in prosthetics that can restore a sense of touch or have some autonomy in handling objects. I see replicating the human sense of touch as a starting point for this technology.

How was your experience publishing with J. R. Soc. Interface?

Overall, a positive experience. It was not easy having two papers reviewed at the same time - alongside the study described above there was a second paper covering an extension of the fingertip design to include a vibrational tactile sense. However, communication with the editors allowed us to keep the two papers together so they could be published as pair.

Your studies received a lot of media attention. Why do you think they were so popular in the media?

This is a good question. It seemed that a threshold level of interest was passed where basically every media outlet covered it. Most importantly, I think the story was relatable because it concerns our hands and tactile skin, which obviously we all have. Seeking to reproduce those artificially using 3D-printing gave it more interest and there were the robotics elements that are very topical. We could also state that we were the first study to compare human and artificial touch in this way. Having a coordinated press release between my University and the Royal Society press team also gave greater initial visibility.

I collected some of the media articles together on a web page. You can see from the titles how different media outlets picked up distinct aspects of the story. Personally, I most liked the articles that gave an original perspective, such as the coverage we had in Science.

For more research that applies mathematics, physics and engineering to important biological questions, check out Journal of the Royal Society Interface.

Robot hand with tactile skin integrated into the fingertips, using the tactile sense to delicately hold an object. Christopher Ford and Nathan Lepora.