Rupert Baker tells the story of the Royal Society's move in 1710 to a house in Crane Court, just off Fleet Street in the City of London.

Sir Isaac Newton considered that the building, ‘being in the middle of the Town out of Noise … might be a proper place to be purchased by the Society for their meetings.'

Fleet Street, running from the former site of Sir Christopher Wren’s Temple Bar in the west to Ludgate Circus in the east, is one of the City of London’s busiest roads. As you’ll doubtless be aware, the street was long associated with journalism and the British newspaper industry. However, did you know that a courtyard off Fleet Street was also the home of the Royal Society for much of the eighteenth century?

The Society was founded on 28 November 1660 at Gresham College in Bishopsgate and, other than a brief interlude following the Great Fire of London, the College continued to host the weekly meetings of the Fellowship for the next 50 years. However, by the first decade of the eighteenth century, change was in the air: the Gresham Trustees wished to rebuild the College, and the President of the Royal Society, Sir Isaac Newton, sought to move away from a location he associated with his late, great rival Robert Hooke.

On 10 September 1710, Newton informed Council of the Royal Society that the house of the late Dr Brown was to be sold. Located at the north end of Crane Court, a narrow yard towards the Temple Bar end of Fleet Street, Newton considered that the building, ‘being in the middle of the Town out of Noise … might be a proper place to be purchased by the Society for their meetings.’ An ‘adjoyning little House’ was added to the deal, to be rented out, and in late October a price of £1450 was agreed for the purchase of both properties. The first meeting of the Fellows in their new Crane Court home took place on 8 November 1710. 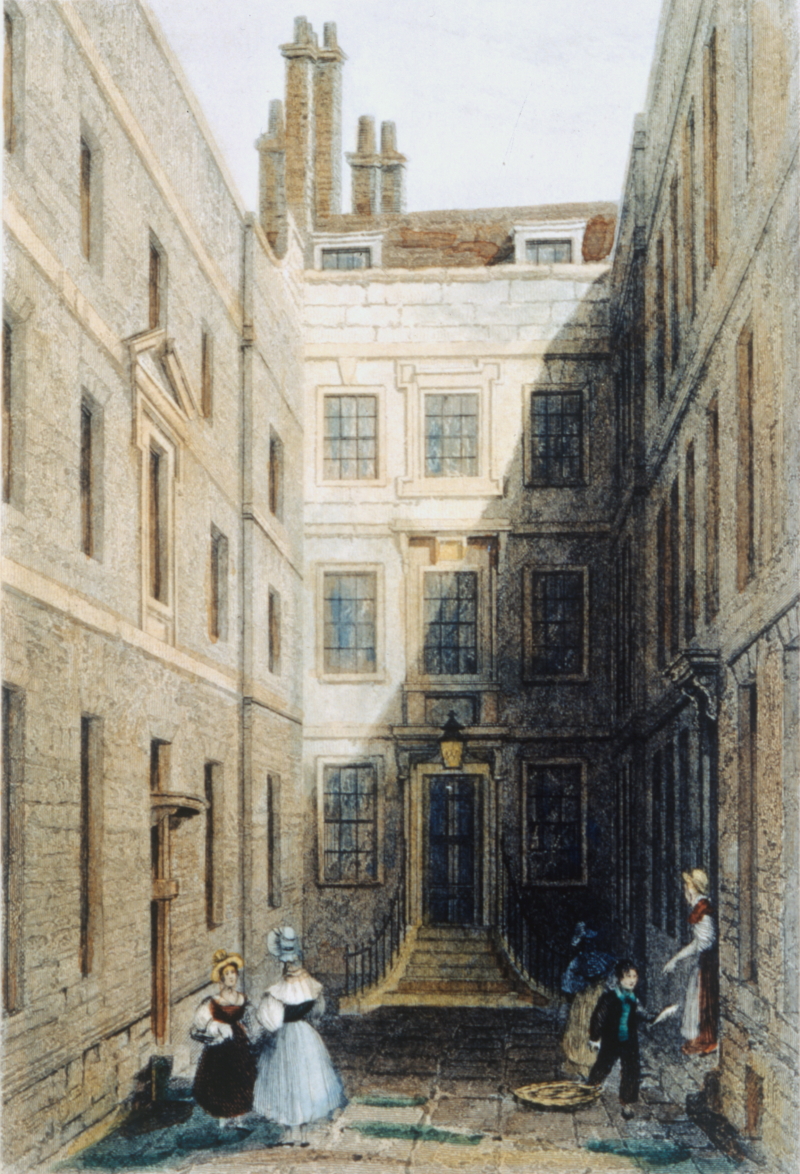 The move was not universally popular. A contemporary pamphlet – by a Fellow who remained anonymous to avoid the wrath of Newton – complained that ‘the House was mean and dark … uncapable of receiving either their useful and noble Collection of Books, or their Curiosities of Nature and Art’. As an additional drawback, the long courtyard leading from Fleet Street to the Society’s front door would mean that ‘in heavy Rain a Man can hardly escape being thoroughly wet, before he can pass through it.’

Of course, if alterations are required to render one’s new home fit for purpose, it helps to have the country’s greatest architect on the team. Wren, then aged 78 and a Founder Fellow of the Royal Society, gave advice to several Society committees dealing with the immediate refurbishment requirements. He recommended eight workmen, including a carpenter, a bricklayer, a plasterer and a plumber, all of whom he had employed in the building of the recently completed St Paul’s Cathedral.

Wren then turned his attention to the ‘Curiosities of Nature and Art’: the Society’s museum, or Repository, which had previously occupied a spacious 90-foot gallery at Gresham College. The north side of the Crane Court property saw the addition of a two-story extension to house this collection, built to Wren’s design with some later modifications by the Society’s Secretary, Richard Waller, and costing a further £400. Demolished at the end of the eighteenth century following the Society’s departure, the Crane Court Repository extension may well be the last building Wren ever designed. Regrettably, by 1713, the cellar beneath had been rented out to a cheesemonger, with complaints quickly coming in about 'the ill scent of the Goods'. 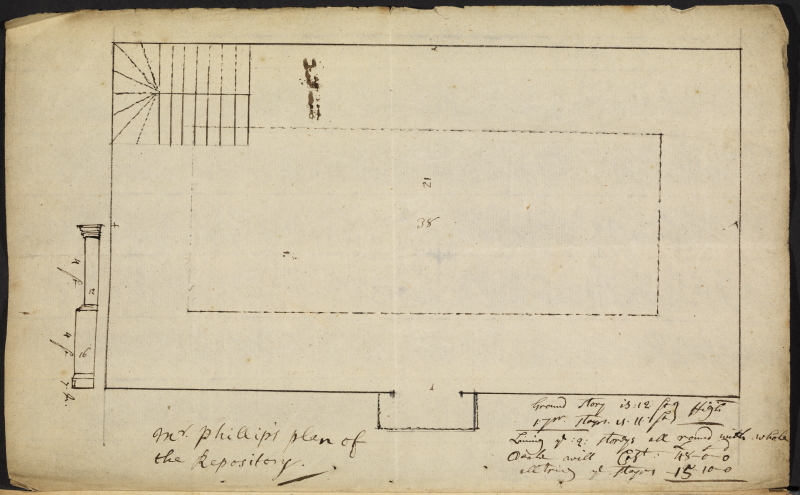 With museum and library safely transferred from Gresham College, and with a lantern hung over the entrance to the Court from Fleet Street and lit during the weekly meetings, the Society embarked on a residency that was to last through most of the century. Discussions and experiments covered a wide range of topics, from smallpox inoculation and lightning conductor design to observing the transit of Venus across the face of the Sun, and illustrious names such as Benjamin Franklin and Joseph Priestley were added to the Fellowship. 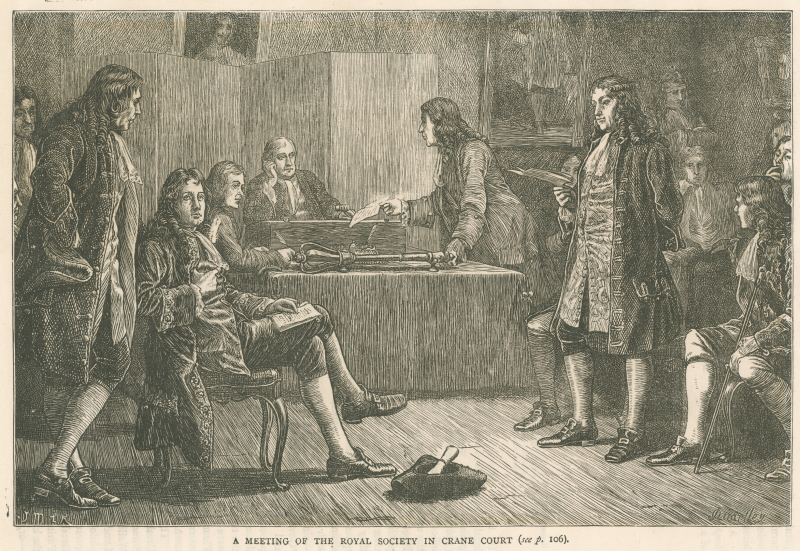 An 1878 visualisation of a Royal Society meeting in Crane Court, with Newton in the President’s chair (RS.11853)

In 1778, botanist Sir Joseph Banks became President of the Royal Society, a position he was to hold for nearly 42 years. One of his first acts as President was to accept an offer from the Government of accommodation in the newly refurbished Somerset House, setting in motion the Society’s removal from Crane Court. The final meeting took place there on 23 November 1780, after which the property was sold to the Scottish Corporation, the Fellows decamped half a mile or so to the south-west, and the association between Fleet Street and the Royal Society came to an end.

A version of this article will be added to the Fleet Street Heritage Project, a resource documenting the history of the area online and in a public exhibit in the window of the old Daily Telegraph building, currently being redeveloped. Do take a look at their excellent Fleet Street Heritage Project website for further stories of the Royal Society’s eighteenth-century neighbours!