Bird Sense: What It's Like to Be a Bird by Tim Birkhead 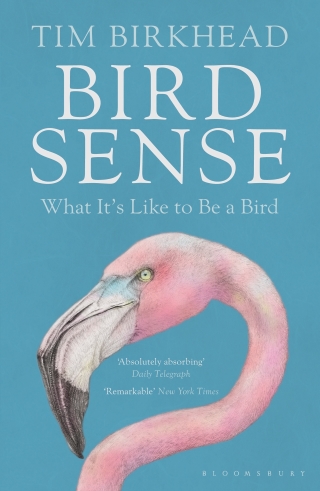 What is it like to be a swift, flying at over one hundred kilometres an hour? Or a kiwi, plodding flightlessly among the humid undergrowth in the pitch dark of a New Zealand night? And what is going on inside the head of a nightingale as it sings, and how does its brain improvise?

Bird Sense addresses questions like these and many more, by describing the senses of birds that enable them to interpret their environment and to interact with each other. Our affinity for birds is often said to be the result of shared senses - vision and hearing - but how exactly do their senses compare with our own? And what about a birds' sense of taste, or smell, or touch or the ability to detect the earth's magnetic field? Or the extraordinary ability of desert birds to detect rain hundreds of kilometres away - how do they do it?

Bird Sense is based on a conviction that we have consistently underestimated what goes on in a bird's head. Our understanding of bird behaviour is simultaneously informed and constrained by the way we watch and study them. By drawing attention to the way these frameworks both facilitate and inhibit discovery, it identifies ways we can escape from them to seek new horizons in bird behaviour.

Tim Birkhead is a professor at the University of Sheffield where he teaches animal behaviour and the history of science. He is a Fellow of the Royal Society of London and his research has taken him all over the world in the quest to understand the lives of birds. He has written for The Independent, New Scientist, BBC Wildlife. Among his other books are Promiscuity, Great Auk Islands, The Cambridge Encyclopaedia of Birds which won the McColvin medal and The Red Canary which won the Consul Cremer Prize. He is married with three children and lives in Sheffield.

Bird Sense opens new worlds to the imagination through a wealth of passionately observed science. You truly get a sense of what it is like to be a bird.