Life’s Greatest Secret: The Story of the Race to Crack the Genetic Code by Matthew Cobb 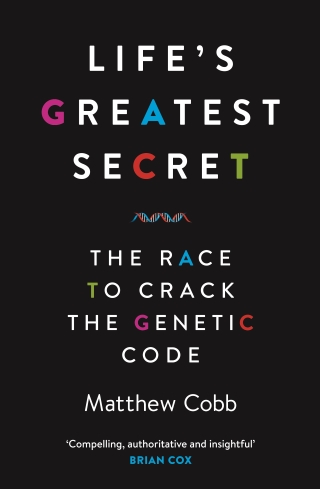 This book tells the story of the discovery and cracking of the genetic code, interweaving science, biography and anecdote. Cobb describes cooperation and competition among some of the twentieth-century's most outstanding and eccentric minds, moves between biology, physics and chemistry, and shows the part played by computing and cybernetics. It is both thrilling science and a fascinating story about how science is done.

Matthew Cobb is Professor of Zoology at the University of Manchester where his research focuses on the sense of smell, insect behaviour and the history of science. His books include The Egg & Sperm Race and acclaimed accounts of the French Resistance during the Second World War and the liberation of Paris in 1944.

A brilliantly written account of one of the most important scientific discoveries of the century, with a fresh perspective that also dispels the myths popularised by previous reports.