I Contain Multitudes: The Microbes Within Us and a Grander View of Life by Ed Yong 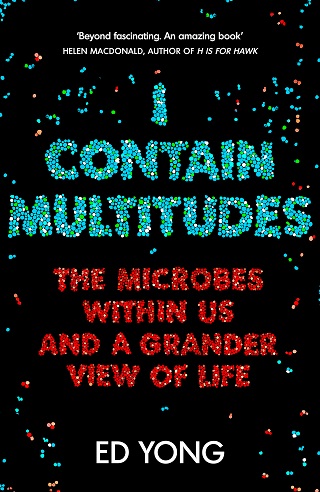 Your body is teeming with tens of trillions of microbes. It’s an entire world, a colony full of life.   In other words, you contain multitudes. These microscopic companions sculpt our organs, protect us from diseases, guide our behaviour, and bombard us with their genes. They also hold the key to understanding all life on earth.

In I Contain Multitudes, Ed Yong opens our eyes and invites us to marvel at ourselves and other animals in a new light, less as individuals and more as thriving ecosystems. We learn the invisible and wondrous science behind the corals that construct mighty reefs and the squid that create their own light shows. We see how bacteria can alter our response to cancer-fighting drugs, tune our immune system, influence our evolution, and even modify our genetic make-up. And we meet the scientists who are manipulating these microscopic partners to our advantage.

Ed Yong, born in December, 1981 in Malaysia, is an award-winning science writer who reports for The Atlantic. His blog, Not Exactly Rocket Science, is hosted by National Geographic, and his work has also appeared in Wired, the New York Times, Nature, the BBC, New Scientist, Scientific American, the Guardian, The Times and more. A New York Times bestseller, I Contain Multitudes was shortlisted for the Wellcome Book Prize 2017 and has been selected as Science Book of the Year by The Economist, The Times and The Observer.  He currently lives in Washington DC.

Who knew that the microbiome was so important? We assumed it was just to make the gut work. I Contain Multitudes is a book everybody should read. The style is unfussy and clear, but it’s so full of gems that makes you want to call someone instantly and say “Did you know…?