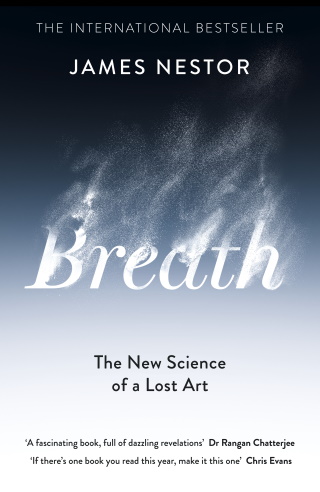 There is nothing more essential to our health and wellbeing than breathing: take air in, let it out, repeat 25,000 times a day. Yet, as a species, humans have lost the ability to breathe correctly, with grave consequences. In Breath, journalist James Nestor travels the world to discover the hidden science behind ancient breathing practices like Pranayama, Sudarshan Kriya and Tummo, to figure out what went wrong and how to fix it.

Modern research is showing us that making even slight adjustments to the way we inhale and exhale can jump-start athletic performance, rejuvenate internal organs, halt snoring, allergies, asthma and autoimmune disease, and even straighten scoliotic spines. None of this should be possible, and yet it is. Drawing on thousands of years of ancient wisdom and recent cutting-edge studies in pulmonology, psychology, biochemistry and human physiology, Breath turns the conventional wisdom of what we thought we knew about our most basic biological function on its head.

You will never breathe the same again.