100 Things to Know About Saving the Planet 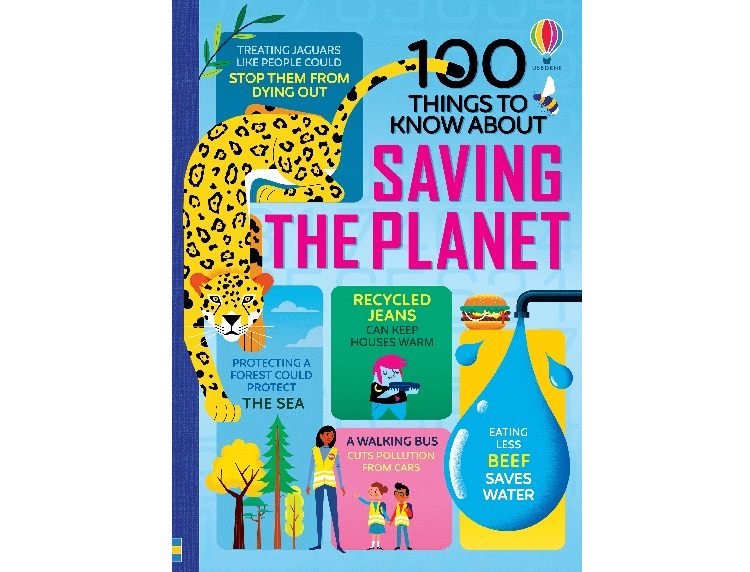 How could plastic-eating bacteria help reduce waste? Can a river be given human rights? Could we generate all the power we need from the sun and the wind? How do woolly sweaters help penguins in peril? Would building a giant sunshade in space stop the world from overheating? Find the answers to these questions and more in this exciting book full of big, small and unexpected ways to save the planet.

Gabby Logan said: "This is the kind of book I would have by my bed as a child. Children are much more engaged in climate change than many of the adults they live with and this book is such a good practical way of helping to bridge that gap and spark conversation."

About the authors and illustrators

Eddie Reynolds joined Usborne Publishing in 2017. Before that, he studied German and French at Cambridge University, then moved to Berlin after a short while teaching Ancient History at a school in Guangzhou, China. Now back in the UK, he writes books about all sorts, including computers, maps and engineering.

Rose Hall grew up in Northumberland, studied Physiology at Oxford and looked after orphaned orangutans for a bit. She worked in the charity sector for ten years, writing about issues from renewable energy, to the safety of workers in Bangladesh. For Usborne, she's written books about engineering, business, computers and the environment.

Alice James joined Usborne after working in primary schools for a while. She absolutely loves science, and over the years has lived with chimps, spent a month in the rainforest, studied Biology at Oxford University, and grown 200 carnivorous plants (not necessarily in that order). Whilst at Usborne Alice has worked on books on all kinds of science topics, from space to energy to the periodic table.

Jerome Martin has written children's books about science, history, Shakespeare and food. Before joining Usborne in 2014, he spent a decade studying literature at Harvard, Cambridge and the University of Iowa, and several years behaving responsibly in a copywriting office. Now, he spends his working hours researching delightful and amazing facts, his evening hours parenting two children, and the minutes in-between writing poetry.

Tom Mumbray studied History at university before joining Usborne in 2018. Since then he's worked on books about Planet Earth, technology, maths and inventions (and learned lots of amazing facts about everything from paleoburrows to fireworks along the way).

Lan Cook joined Usborne after working as a bookseller. She absolutely loves learning about anything and everything. She has lived in China, attempted to create the perfect aquarium biotope, studied Anglo-Saxon, Norse and Celtic at Cambridge University, and can hit an archery target from 100 feet away. Lan has always loved collecting knowledge and as many weird facts as possible, so working for Usborne really is a dream job!

Matthew Oldham writes books for Usborne about all sorts of subjects, including history, science and Planet Earth. Before he did this, he studied English at university and worked for the BBC where he made funny radio programmes. He lives in London and spends his weekends visiting its many museums and exploring different parts of the city.

Darran Stobbart spent a decade as children's bookseller in Durham. He studied crime scene and forensic science at university. It's handier than you'd expect. He collects useless facts, and writes about lots of subjects - especially science. He is passionate about stories, music, and will talk about octopuses at great length.

Alex Frith has been writing Usborne books since 2005. His diverse output covers such titles as 'See inside Your Head', 'Stories of Thor' and 'Politics for Beginners'. He has spoken at multiple festivals about his book '100 Things to Know About Space'. Alex can be found in London.

Federico Mariani is an Italian illustrator and designer of characters, toys and games. As a kid he liked picture books, and even though teachers said, “he cannot draw”, he wanted to become an illustrator. His colourful characters and bright illustrations appear in every book in Usborne’s 100 Things to Know series.

Jake Williams is an illustrator from sunny (or often not so sunny) Bournemouth, England. His work features a strong focus on colour and character, balancing playful concepts with elegant and sophisticated designs.

Dominique Bryon is a graphic illustrator, movie-watcher and assistant to Stan Chow, based near Manchester. She predominantly works using bold shapes, colours and textures to create illustrations across a variety of subjects for print, animation and advertising.

Dale Edin Murray is a rare breed of self-taught illustrators, influenced by Hip-hop culture, skateboard graphics, Bluenote record sleeves and Scandinavian folk art... this hotchpotch of influences has manifested itself in a slick but hugely adaptable style. He has produced artwork for the editorial, advertising and design industries around the globe and his clients include Nike, Apple, Disney, Facebook NBA and Playstation.

Parko Polo is the alter ego of Scottish Illustrator Edward McGowan. Now based in Sydney, he has been working in the industry for over a decade creating work for a wide range of international clients in advertising, publishing and editorial.

Ollie Hoff is a freelance Illustrator and Graphic Designer based in Norwich, UK. Graduating from Norwich University of the Arts in late 2012 studying BA Games Art & Design, Ollie’s work focuses on bright colours and rough textures, creating fun and charming illustrations influenced by film and gaming.