Development of SR based in situ techniques applied to industrial materials 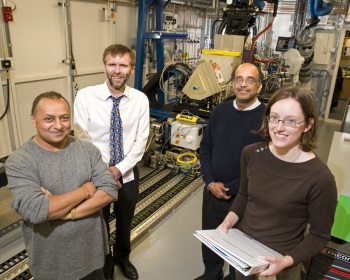 Rather than spin out a company from his laboratory bench, Gopinathan Sankar understood the value of working away inside one of the largest firms that operates in his chosen field. The Professor of Materials Chemistry at University College London focuses on catalysts so found an excellent fit with Johnson Matthey, the FTSE 100 science company with annual sales of £11bn.

In 2007 Sankar was awarded a Royal Society Industry Fellowship that for four years covered half his basic salary so he could spend two days a week at Matthey. Much of the firm’s business revolves around the platinum group of metals. Its clean air division, which supplies catalytic convertors that remove carbon dioxide and the like from car engines, accounts for two-thirds of group sales. The 202-year old firm also supplies catalysts and diagnostics to a range of industries, has a small drug-making unit and is working away on low-cost, high density batteries that has drawn the interest of car manufacturers and power cell providers.

Sankar’s work looks at the creation and characterisation of catalysts at the atomic level. Catalysts with improved properties work out as more cost effective and have a more positive effect on the environment. He says: “The Royal Society was absolutely instrumental in the university decreasing my duties and letting me go so I could focus on this collaborative effort.”

In addition to his placement, Sankar began PhD programmes that indirectly benefited the university. Matthey funded one-quarter of the students’ time, with the balance covered by a grant from the Engineering and Physical Sciences Research Council (EPSRC). After the Royal Society funding ended in 2011, Sankar continued to collaborate with the company. Over the years, six of his PhD students have gone on to be employed by Matthey.

Much of his time has been spent at Sonning Common near Reading, the site of Matthey’s technology centre. He says: “My work involved proprietary and fundamental research – understanding the materials better so they could improve their processing technology. Working with a big company and taking them to such an advanced level has been a very fruitful exercise.”

Since his arrival, Sankar thinks Matthey has invested more in basic research, to the benefit of the company. Four years ago, when there was a question mark over contamination in some of their catalysts, Sankar was involved in a major project to prove – through research – that their materials were completely safe.