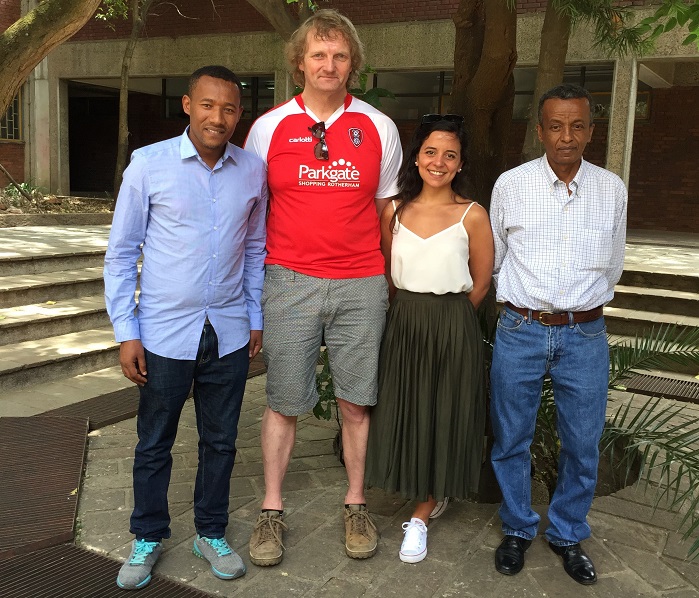 The Royal Society – Royal Society of Chemistry International Exchanges Award is providing £12,000 of support to an industry and environmentally focused collaboration between Professor Steven Howdle of the University of Nottingham and Dr Yonas Chebude of Addis Ababa University. Professor Howdle and Dr Chebude met and exchanged ideas at an international conference, and this meeting formed the basis of the collaboration between their research groups. Their project concentrates on extracting, purifying and converting oils present in African Ironweed into environmentally sustainable biopolymers with potential uses in the pharmaceutical industry and the production of plastics.

‘We have abundant natural resources but we do not have the facilities to implement the ideas. That was the challenge,’ says Dr Chebude. Ironweed is a prolifically growing natural plant in Ethiopia and the broader sub-Saharan regions. In Addis, recent work pioneered by Dr Chebude had demonstrated that the weed contains a significant level of vernonia oil, which can be turned into vernolic acid, a potentially very valuable natural resource and source of bioderived plastics. However, there were significant hurdles to overcome: the yield of vernolic acid from vernonia oil using conventional solvent extraction method is very low. Meanwhile, in Nottingham, Steve Howdle was working on a similar molecule that is extracted from birch bark using supercritical carbon dioxide, a very gentle and natural extraction methodology.

Through the International Exchanges Award, the two groups have brought together their complementary expertise to extract the vernonia oil in order to create a completely new range of bioderived plastics. Using the funding, members of each group have been able to visit their counterpart institution, as well as conduct joint work at unique facilities at Bangor University, UK. Without such an exchange of skills and expertise the project would not be viable.

In addition to Professor Howdle’s and Dr Chebude’s input, PhD students from both groups have taken advantage of the learning opportunities. Bilateral visits between the UK and Ethiopia have equipped the PhD students with the knowledge, networks and skills necessary to sustain the partnership long after the completion of the award. Beyond the obvious academic benefits, these exchanges also provide the recipients and their teams with an international perspective on challenges they had not previously considered.

‘My most important advice to academics is to get rid of the fear of rejection, don’t be afraid of approaching UK scientists or other international collaborators,’ says Dr Chebude. He cites this international exchange with increasing his confidence in an academic and research environment, due to both the prestige of the award and the potential impact his research will have on a wide selection of industries. Dr Chebude suggests that prospective applicants to international exchange programmes should investigate whether pre-existing collaborations exist between their universities and other organisations. These networks give applicants guidance on who to approach in order to develop a research collaboration.

Such is the success of the working relationship between the two research groups, further collaborations between groups at the two universities have begun to form, inspired by the achievements of Professor Howdle and Professor Chebude. Professor Howdle also commented enthusiastically 'We have developed new and exciting science that simply would not have happened if we had not been able to follow up our initial meeting by applying for the International Exchanges Award and this has benefited both of our groups and in particular our PhD students, Yaregal and Mariana'.