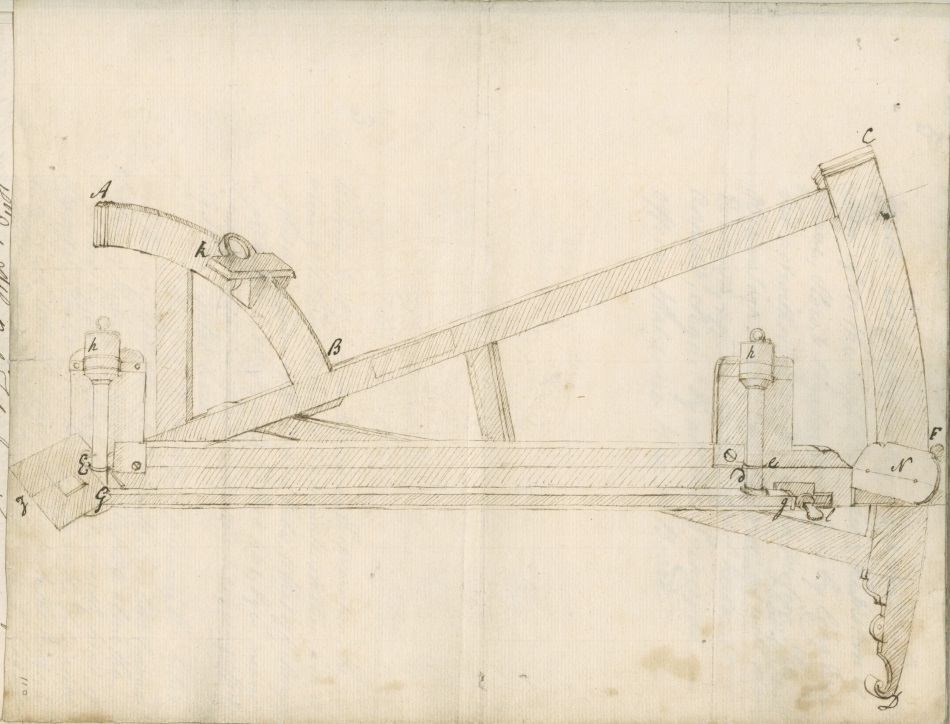 Figure from ‘Description and use of an apparatus added as an improvement to Davis's Quadrant consisting of a Mercurial level for taking the Co-altitude of the Sun or Star at Sea without the visual assistance of the Sensible Horizon which frequently is obscure' by Charles Leigh. Classified Papers, Volume 8ii. Archive of the Royal Society.

I'm an Assistant Professor of English at Colby College. I am also affiliated faculty in the program in Science, Technology, and Society (STS), and teach a range of interdisciplinary courses on British literature and the Enlightenment.

My research takes Enlightenment literary history as a basis for understanding how we frame and organize knowledge, how the domains of reality and fiction interact in literature, and how science writing and the eighteenth-century novel mutually construct our ideas about what we know and how we know it.

Project Summary “Data-Generating Instruments and the Data They Produced, 1600-1800”

This project focuses on how seventeenth- and eighteenth-century scientific instruments, particularly the navigational sextant, were described, depicted, and discussed, as well as how the data they generated were described, depicted, and discussed. It examines the importance of how sextants and similar navigational technologies were portrayed for impressions of their reliability. This work is part of ongoing research on the history and varying forms of “data” in early modern Britain.

I undertook archival research at the Royal Society Library in London over the course of two months, focusing primarily on manuscripts pertaining to sextants, the Royal Society’s involvement in the promotion and execution of award schemes leading up to and after the Longitude Act of 1714, and the broader methods and modes of representation related to navigational technologies in the seventeenth and eighteenth centuries.

My archival research at the Royal Society has led to at least three concrete outputs at various stages of completion. The first is an essay for a wide readership on “Data at the Dawn of the Anthropocene,” which will be published in the coming months in the Brooklyn Rail, an interdisciplinary art journal with international circulation. The second is a chapter, “Romancing the Sextant in Eighteenth-Century Britain,” on the role of eighteenth-century literature in shaping public perceptions of the reliability of navigational instruments, which will be part of a peer-reviewed collection of essays, Science and Storytelling in the Eighteenth Century: Knowledge, Narrative, Discipline, eds. David Alff and Danielle Sprat (University of Virginia Press, forthcoming). The third is a chapter on navigational data in my ongoing book project on the history of data, provisionally titled Blank Forms: The Rise of the Data Narrative.