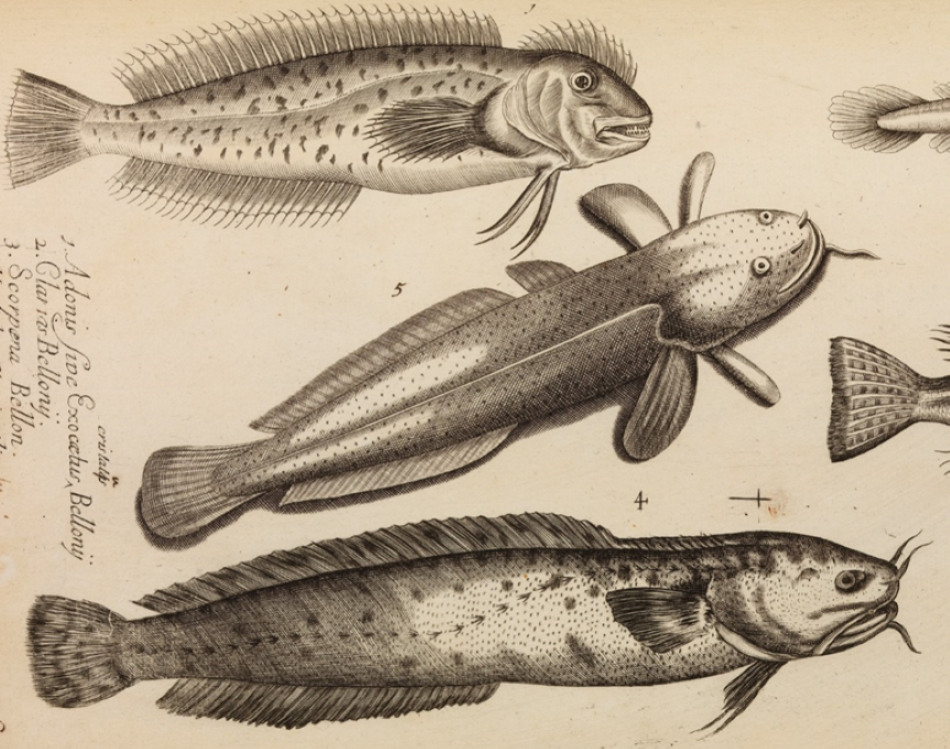 I am a PhD candidate at Leiden University working on the history of early modern natural history and philosophy.

Project Summary "Fresh Fish: Observation and Authority in and around the Historia piscium (1686)"

My research examines how knowledge about the world underwater – things swimming and crawling in oceans, seas, rivers or streams – was created in early modern Europe, by whom, and to what ends.

Thanks to the grant funding, I was able to stay in London for one month to consult archival sources both at the Royal Society and the British Library. These materials were in one way or the other related to the Historia piscium (Oxford, 1686), the natural history of fishes by Francis Willughby and John Ray. The grant also allowed me to order scans and digitisations as well as obtain permissions of images that will be used in the article that is to come out of this research.

My main source at the Royal Society was an annotated copy of the Historia piscium (RCN 18574). The marginalia, done by certain Fellows of the Society, illuminate how natural historical works were added to and amended even after they were published. Because some of these inscriptions specify where in London one might encounter a certain species of fish, they furthermore serve to show how knowledge on the world underwater could be created in the city. When in the Archives of the Royal Society, I found that it contained all kinds of (snippets) of writings and images related to fish and other aquatic creatures in, for example, the historical letter books and journal books.

My main source at the British Library was a book of drawings that were used as models for some of the engravings in the Historia piscium (Add MS 5308c). The manuscript contains inscriptions by John Ray himself, remarking on the veracity and/or usefulness of certain illustrations. This yields insight into what aspects of images were deemed pertinent (and which were not), and also what their status as sources of knowledge about nature might be.

By bringing the above materials together, I was able to reconstruct how in the production of natural knowledge about fish, Willughby, Ray and the other Fellows navigated various sources. They performed experiments, shared observations in letters, judged descriptions in books, examined illustrations and had new ones designed, and also sought out both oral and written reports of fishermen and fishmongers.

The article in which Didi’s archival findings are incorporated has been published as “Fresh fish: Observation up close in late seventeenth-century England” in Notes and Records of the Royal Society June 2020.  It is an adaptation of a chapter of her dissertation completed at the end of 2020. Didi planned to present her findings at the Scientiae conference in Amsterdam summer 2020. She put together a panel, which was accepted, on the Royal Society and the broad range of historical actors (fishermen, miners, instrument makers, artists) who are not commonly associated to the Society but nonetheless contributed to its investigations of the natural world. Unfortunately, the conference was cancelled due to Covid-19 but maybe rescheduled in 2021.