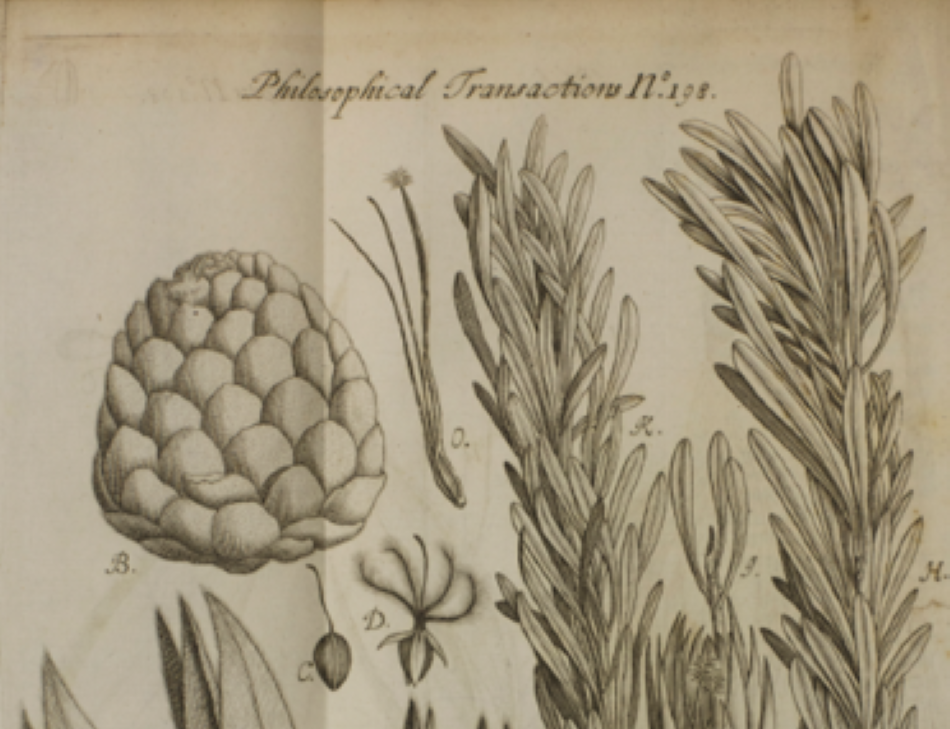 Illustration from ‘An account of two plants lately brought from the Cape of Good Hope’. Philosophical Transactions of the Royal Society, vol 17, issue 198 (1693)

I am a third-year PhD student under the supervision of Dr Joanna Lewis and Dr David Motadel at London School of Economics. I undertook my BA at the University of South Carolina with degrees in History and Anthropology and an MA in European History at UCL. I spent 2018-2019 undertaking fieldwork affiliations with the University of Cape Town and Freie Universität. I am a co-convener for the HY509 International History Research Seminar and a co-editor of the LSE International History Blog. My research interests include Anglo-German relations, imperial history (particularly Britain and Germany), history of science, and global/transnational history.

Project Summary “Between Europe and the World: German Naturalists in the Cape Colony, 1652-1871”

My thesis is concerned with the lack of attention devoted to ‘Germans’ who were foundational to the observation, description, and study of early southern African natural history in the eighteenth and nineteenth centuries. Showing sensitivity to the diversity and complexity of the social and political systems of Africa’s peoples, as well as the marvels of its natural environment, it was primarily ‘Germans’ who contributed to the production of scientific knowledge about the region, creating durable bonds through a variety of transnational contacts. Not only did they pioneer and champion the study of the natural history of the wider Cape Colony during the administration of the Dutch East India Company, they also influenced the exponential development of early imperial natural history. It will be shown that these ‘Germans’ became conduits between European and African societies and environments, mediating the global exchange of knowledge, material, and power. This forms part of a larger study which aims to critique a primary issue in the historiography of the British Empire, often written in isolation from those of continental Europe. Similarly, it challenges the historiographical tendency to foreshorten the history of southern Africa. It will also contribute to our understanding of transnational and trans-imperial knowledge production, imperial migration, and the role of ‘British’ imperial structures in the global diffusion of ‘German’ methods and philosophies.

The funds generously awarded from the Lisa Jardine Grant of the Royal Society allowed me to pursue an archival trip to South Africa to gather new material which is only available in Cape Town and continue research for my PhD project. Funds were spent on travel and accommodation whilst consulting records at the Western Cape Archives and the National Library of South Africa, including material on the British-German Legion who were brought to South Africa to ‘safeguard the frontier’ in the wake of the 1856-57 Xhosa Cattle-Killing and on the Palgrave Commission (1876-85), in which German missionaries acted as the primary translators between different indigenous groups and government officials. I also gathered material from the Commission for Native Affairs, on the South African Museum, on the mission station at Genadendal, and on the early form of the botanic garden. At the National Library of South Africa, I worked with the Drège Family Collection (brothers who were commercial botanists) and the Bleek Collection (he was a comparative philologist. I also consulted journals which are only available in South Africa, like the South African Commercial Advertiser and the Quarterly Bulletin of the South African Library.

I travelled to Genadendal, the site of the oldest mission station in the country founded by the German missionaries of the Moravian Church. These missionaries were essential – they collected botanical specimens, conducted important philological work, and acted as a place of rest for many of the Germans traveling in the interior. I also drove to Tulbagh, another important archival site.

The central of this research trip was to gather data for my PhD. My hope is to submit one or two articles to relevant journals just before or just after the completion of the thesis. I also am very keen to work with a colleague of mine to develop a workshop on Global Germans. Similarly, I’d be interested in working on an edited volume similar to John M. Mackenzie’s contribution to the Oxford History of the British Empire Companion Series, Scotland and the British Empire. A version of this chronicling the multifarious roles that Germans played within the British Empire is long overdue and I believe would be much welcomed within the field. I’d be interested in working on a scholarly edition of the travel journal of scientific collector CF Drège. It remains an unpublished manuscript in the National Library of South Africa but would be most interesting for anyone interested in global science and knowledge production.