The European Space Agency (ESA) has announced Principia as the name for British astronaut Tim Peake’s next mission to the International Space Station (ISS), to be launched at the end of November 2015.

Tim Peake and competition winners with the original manuscript for Newton's Principia.

The name is taken from one of the most important scientific books ever published, Sir Isaac Newton’s Philosophiae Naturalis Principia Mathematica. The original manuscript for the book, with handwritten notes from Newton, resides at the Royal Society.

In March this year, ESA launched a competition asking people to help choose a name for the mission - as they do every time a European astronaut goes into orbit.  A shortlist was then passed to Major Peake to make the final decision.  Major Peake selected Principia to celebrate one of the UK’s greatest ever researchers and his very important scientific achievements.  The name will also be incorporated into the mission logo.

The 20 competition winners who suggested the name Principia attended a special reception hosted by the UK Space Agency and ESA at the Royal Society this week. At the reception they were able to meet Major Peake and view the original manuscript of Principia as well as other artefacts related to Newton. 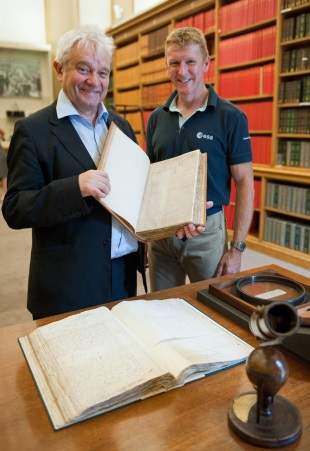 Sir Paul Nurse and Tim Peake with the Principia

The title of Isaac Newton’s book in English reads ‘The Mathematical Principles of Natural Philosophy’ and is usually abbreviated to ‘Principia Mathematica’ or simply ‘Principia’.

As the title suggests, the book explains the mathematical formulae and laws governing the universe. It is the most important scientific book ever published since Newton’s ideas changed the way people understood the world. Yet Newton was originally reluctant to publish it, being unwilling to be drawn into debates and discussions of his work.

The astronomer Edmund Halley FRS (1656-1742) was sufficiently excited by his contact with Isaac Newton (1643-1727) in Cambridge during the year 1684 to solicit more material for the Royal Society than Newton’s original nine-page response to his questions. Halley would eventually take over responsibility for the publishing of what became the Principia, because the Royal Society’s funds had been denuded by the publication of John Ray and Francis Willughby’s History of Fishes (1686). This famous incident (and Samuel Pepys’s involvement as Royal Society President) was memorably lampooned by the Horrible Histories team.

It would be Halley who worked to smooth over the Newton-Hooke dispute over the priority of the inverse square law, coaxing the books to form the Principia from Newton. The first book of Principia was presented to the Royal Society in 1686 and for four months, Halley saw the manuscript through the press, so that the completed book appeared in 1687. In the process, Newton’s international reputation as a mathematical genius would be made. 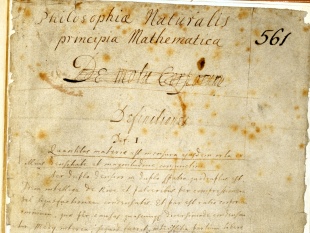 Handwritten title page of the Principia

The manuscript of Newton’s astonishing work survives and is quite simply the Royal Society’s greatest treasure. It is a complete text, in the hand of Humphry Newton, the scribe who produced a fair copy for the printer to create the book’s first edition. The text is interspersed with corrections, amendments and notes on where to place illustrative figures written by Isaac Newton and Halley as the books of the Principia took shape.

Newton’s work may have been prompted by Edmund Halley’s quizzing on orbital motion during a visit to Cambridge in 1684, but it was also informed by earlier correspondence with Robert Hooke (1635-1703) and others and based in part upon  reasoning dating back to the 1660s (and that apple). Newton contemplated the major ideas incorporated in the Principia during 1684-1685. These included his three Laws of Motion and law of universal gravitation. Newton’s conclusion, that matter in the universe attracts all other matter, proportional to mass and inversely proportional to the square of their distance would become one of many cornerstones of scientific thought contained in Principia.

Find out more about the Principia and the history of astronauts at the Royal Society in our blog post.