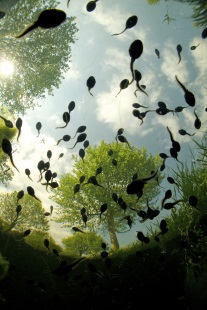 Frog's eye view: 2015's first place was awarded to biologist Bert Willaert for underwater shot of a group of tadpole’s seemingly in flight and silhouetted against a bright blue sky.

The competition celebrates the power of photography to communicate science. Entries must not only be aesthetically beautiful but convey an interesting scientific phenomenon.

The competition, open until 1st June 2016, will be judged by a panel of experts in science and photography. Judge Professor Alex Badyaev, a multiple winner in the Wildlife Photographer of the Year competition says:

“Science and photography are similar because in both we take the complexity of the natural world and construct out of it -- with ideas and logic or with light and focus -- our narrative. And we succeed when this narrative uncovers natural phenomenon and a pathway for us, human observers, to explore and understand it.”

Last year first place was awarded to biologist Bert Willaert an underwater shot of a group of tadpole’s seemingly in flight and silhouetted against a bright blue sky. The photo’s unusual ‘frog’s eye view’ put a common biological event in a new light with an unexpected perspective.

This year the competition has four categories: Ecology and Environmental Science; Evolutionary Biology; Behaviour; and a new category for 2016, Micro-imaging. The new category goes beyond what can be seen by the human eye and into the hidden world beneath the microscope – a winner will be selected from images captured through a microscope lens.