Today Venki Ramakrishnan made a keynote speech at Parliamentary Links Day at the House of Commons. Links Day is the largest science event on the Parliamentary calendar, organised by the Royal Society of Biology on behalf of the science and technology community, bringing together scientists, learned societies and MPs. Below is a transcript of the speech. 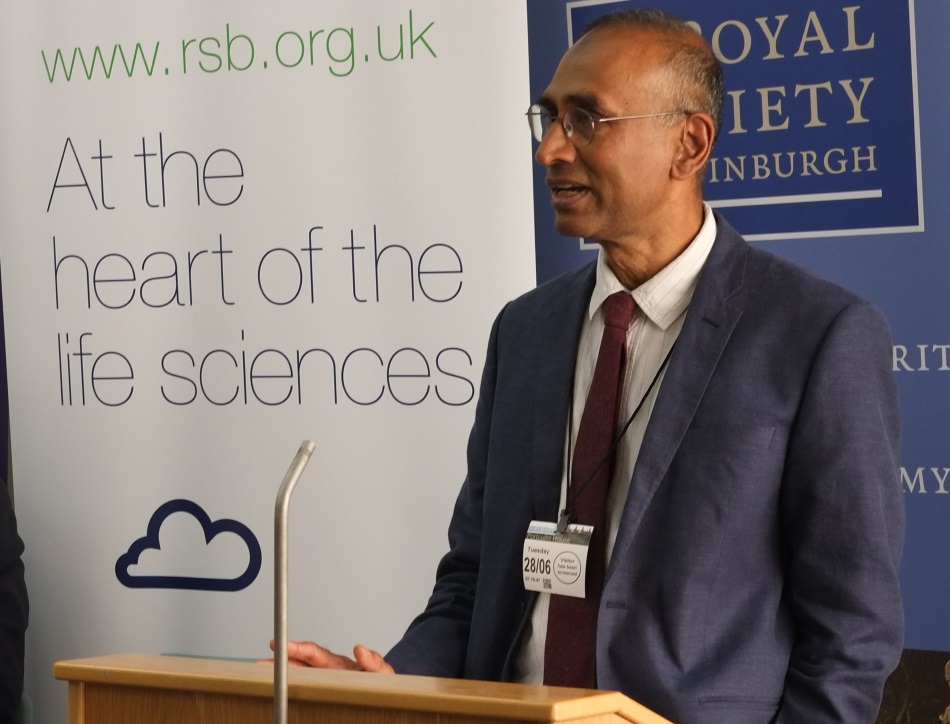 It is an honour to be asked to speak here once again. Last year, I spoke on exactly this occasion for the first time as the president-elect of the Royal Society, and once more I find myself the only obstacle between you and lunch. But how different circumstances are this year. The vast majority of scientists would not consider the results of the referendum a good outcome for science or for the country. But people have had their say and we now need to face the challenges ahead.

I would like to begin by reminding people of the importance of science and innovation for virtually every aspect of our wellbeing as a society from health to wealth. This point has been made many times before, but I will try to reinforce it by asking you to consider a simple correlation: Countries that are knowledge poor do badly even if they are resource rich. But countries that are resource poor do very well as long as they are knowledge-based economies, e.g. Switzerland, Singapore and many others. In our own case, a great deal of the UK’s economic strength comes from the fact that we have historically been a leader in science and technology and continue to punch well above our weight by almost every measure. If we are to continue to do well in the 21st century, we must continue to invest in science and technology. Otherwise we shall inevitably decline both in our standard of living and our influence in the world.

It is therefore important to realise that in the challenging times ahead, we do not shortchange our investment in science. Science requires a stable, long-term commitment. Large scientific facilities take years or decades of planning and building. More importantly, it takes a decade or more to train a scientist. When such people are made redundant during cuts, they leave science. If funding is then restored a few years later, money has to be spent training entirely new people. This is a waste not only of resources but of our brightest young people. It is a poor way to save money, especially when one also considers the small fraction of the overall budget spent on science.

As a result of the flat cash settlement in 2010, direct science funding in the UK declined in real terms. It is only because UK scientists were able to compete well that we were able to get more than our proportional share of EU funding. This funding amounted to about 10% of university research funding and was essential to keeping us competitive during times of austerity. With Brexit, this EU funding is at risk. It is very important therefore for the government to make sure that the overall investment in UK science is not reduced.

This could be done by negotiating with the EU for access to these programmes, which will no doubt come with conditions attached. An alternative would be for the government to restore such funding unilaterally through its own programmes, e.g. through the research councils. However, these two alternatives are not entirely equivalent.

Funding through the EU is not just a financial matter. Rather a key component of it is funding for research networks that bring together scientists from the EU (and beyond).

Although a relatively minor item in the budget, these networks are vital in allowing scientists in Europe to collaborate and to propose and implement large research programmes that no single nation can afford. Thus, although, for example, participation in CERN or ESA is not restricted to EU nations, it is the collaborations of scientists on the ground - funded and promoted by the EU - that enable European scientists to make the most of these facilities. If we are excluded from EU programmes such as Horizon 2020, we will be excluded from many of the collaborations and decision-making bodies, and we will lose our ability to influence new developments and new research directions. Of course we will still be able to collaborate individually with European colleagues and attend meetings, but only as passive outsiders.

Perhaps this is why Switzerland and Norway have both participated in EU programmes despite having significant internal investment of their own in science. However, for these countries, such participation has not come without a price, e.g. in allowing mobility. Thus I see a difficult set of negotiations ahead and during these, it is very important for the government to keep in mind the significant benefits of participation which amplify our science and expand our international reach.

Indeed, one of the great strengths of UK science has been its international nature. The UK is second only to the US as the most preferred destination for international science and engineering doctoral students.  Almost 30% of researchers at our universities, institutes and companies come from abroad. A disproportionate number of Fellows of the Royal Society and Nobel Laureates were foreign born, including about half of the fourteen from my own institution alone. Three of the last five Presidents of the Royal Society were foreign born and the sixth was the son of immigrants. Immigrants have made a great contribution to science and our society and our scientific enterprise would decline precipitously without them. It was therefore distressing to hear an increasing anti-immigrant invective in the past few months, and the episodes of violence directed against foreigners and minorities in the last few days. Equally, it was reassuring yesterday to hear the Prime Minister and several MPs speak out against xenophobia and racism. The government needs to curb this antisocial behaviour and repeatedly assure the world that we are still a welcoming and tolerant society.

These things matter because we are in a global market for talent, and one of the most valuable assets we have is our reputation as an open and welcoming country that attracts students and researchers from all over the world. We must ensure that we maintain this reputation, ensure that our immigration policies reflect this and are in addition fair, efficient and transparent.

The international aspect of science is also important for two other reasons. The first is that many of the global challenges we face can only be tackled by countries working together. We must ensure that we do not place artificial barriers to multinational collaboration and encourage researchers all over the world to work together for the benefit of humanity.

Finally, our strength in science and education gives us a disproportionate influence in the world. Many of the people we train go on to become leaders in their home countries. Our experts are often sought for advice or as collaborators. This network of contacts in turn makes us attractive as a destination for science and for investment. This is one of our most precious assets and we cannot afford to lose it in the uncertain times ahead.

The challenges ahead also present us opportunities to do things better. I hope that we as a society will rise to the occasion and continue to excel. The scientific community stands ready to help and advise the government through the difficult negotiations ahead.