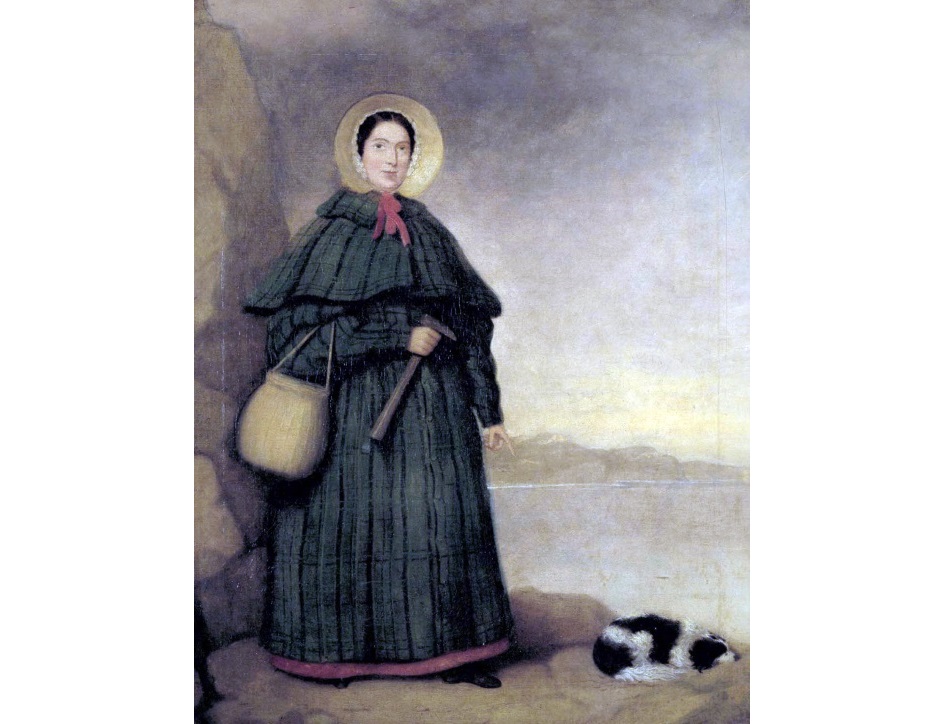 Mary Anning (1799 – 1847) an English fossil collector, dealer, and palaeontologist who became known around the world for important Jurassic marine fossil finds she made at Lyme Regis. Credit: Geological Society

Franklin’s X-ray observation of DNA contributed to the discovery of its helical structure by Crick and Watson in 1953. Her grave commemorates the life and achievements of a scientist of exceptional distinction, whose pioneering work helped lay the foundations of molecular biology. Her early death, aged 37, was a great loss to science. The recently-opened Francis Crick institute in London commemorates Crick’s role in this major contribution to science.

The Royal Society has teamed up with Historic England to celebrate and record the contributions female scientists have made to the world for International Women's Day.

Royal Society Fellows have put forward 28 remarkable individuals, personally championing the achievements of ground breaking female chemists, biologists, physicists or astronomers from past generations. From the first woman ever to be paid for her contribution to astronomy; to a Victorian botanical illustrator who worked from a remote hut in the Brazilian rainforest for a year; to the woman responsible for helping a nation through the Second World War with food rationing; the places where these scientists lived and carried out their work are being uncovered through the collaboration. Their hidden stories are being added to the National Heritage List by fellows of The Royal Society. They are also calling on members of the public to follow their lead and bring more inspirational scientific stories to light by sharing what they know and adding it to the National Heritage List.

Tracey Crouch, Heritage Minister, said: “The important role women have played in the field of British science is too often forgotten. This excellent project by Historic England and the Royal Society recognises the varied and notable contributions they made and will help raise awareness of these pioneering women scientists."

Debbie Mays, Head of Listing at Historic England, said: “While many great men of science have memorials, statues, libraries, and scholarships to remember them by, in most cases we only have the buildings that silently witnessed these women's achievements to connect us to them. Our aim is not only to bring these incredible achievements to light to a wider audience, but demonstrate to girls today that while women have been achieving in science and engineering for centuries, their stories were simply less widely told.”

Venki Ramakrishnan, President of the Royal Society, said: “The Royal Society is pleased to be working with Historic England this International Women’s Day to shine a spotlight on the homes and locations of work for these women who have made distinguished contributions to science. In particular, I am pleased to support the entries for Dorothy Hodgkin and Elsie Widdowson, scientists who were both Fellows of the Royal Society who made major contributions to chemical structure and to human nutrition respectively.”

Remarkable women, their discoveries and stories:

Eleanor Anne Ormerod (1828-1901), the biographical subject of ‘Miss Ormerod’ by Virginia Woolf, was known internationally. She taught at the Royal Agricultural College, Cirencester and was known for undertaking experiments on herself, including holding a live Crested Newt in her mouth to see how its poison effected humans.

Beatrix Potter (1866-1943) was more interested in disproving a theory on fungi than she was about Peter Rabbit.

Caroline Herschel (1750-1848) astronomer, submitted papers to the Royal Society especially on her comet discoveries (she has six comets named after her). Working from her home in Bath, she was the first woman to be paid for her contribution to astronomy.

Dorothy Hodgkin (1910-1994) was state educated and one of only four women to have ever won the Nobel Prize in Chemistry. She lectured at Oxford for most of her career; one of her students was the future Prime Minister Margaret Thatcher, who installed a portrait of Hodgkin in Downing Street in the 1980s.

Lise Meitner (1878-1968) an Austrian-Swedish physicist who worked on radioactivity and nuclear physics with Otto Hahn.

Mary Anning (1799 – 1847) an English fossil collector, dealer, and palaeontologist who became known around the world for important Jurassic marine fossil finds she made at Lyme Regis.

Dorothy Hodgkin (1910-1994) a British biochemist who developed protein crystallography, a way of understanding the atomic and molecular structure of crystals, for which she won the Nobel Prize in Chemistry in 1964.

Beatrix Potter (1866-1943) whilst better known for her stories for children, was also fascinated by natural science and publically challenged an established theory on fungi.

Eleanor Ormerod (1828-1901) born in Sedbury Park, Gloucestershire. The biographical subject of “Miss Ormerod” a short story by Virginia Woolf, and lectured at Royal Agricultural College for several years and carried out experiments on herself.

Caroline Herschel (1750-1848) was a German astronomer who came to live with her brothers in Bath when she was 22.  She is thought to be the first woman to be paid for her contribution to astronomy.

Mary Somerville (1780 –1872) was a Scottish science writer and polymath. She studied mathematics and astronomy, and was nominated to be jointly the first female member of the Royal Astronomical Society at the same time as Caroline Herschel. When she died in 1872, Mary Somerville was hailed by The London Post as 'The Queen of Nineteenth-Century Science'.

Marianne North (1830-1890) was born in Hastings and dedicated her life to recording plants and flowers around the world. Her skill in botanical drawing, before the advent of photography, meant her work helped to further our knowledge of plant life.

Maggie Aderin-Pocock (born 1968), is a space scientist and science educator. She inspires new generations in the wonders of space and founded “Tours of the Universe”, a scheme set up to engage school children and adults.

Anna Atkins (1789 – 1871) was a botanist and photographer, born and raised at Ferox Hall in Kent. Her work on photograms of plants appeared in one of the first publications to record and present specimens in this way and so established photography as an accurate medium for scientific illustration.

Elizabeth Garrett Anderson (1836-1917) was a physician, suffragette, and the first English woman to qualify as a doctor.

Florence Nightingale (1820 – 1910) was an icon of the Victorian age. She was instrumental in giving nursing a professional reputation and establishing nursing roles for women.

Hertha Ayrton (1854-1923) was an engineer, mathematician, physicist and inventor. She went to Girton College, Cambridge in 1876 and while there constructed a sphygmomanometer – a device for measuring blood pressure – and founded the college’s fire brigade.

Jocelyn Bell Burnell (born 1943) is an astrophysicist credited with discovering radio pulsars, one of the most significant scientific discoveries of the twentieth century.

Constance Tipper (1894 – 1995) was one of the first women to take the Natural Sciences Tripos, the framework within which most of the sciences are taught in Cambridge, in 1915. The full implication of her work were not realised until the 1950s but after that, the “Tipper test” became the standard method for determining a form of brittleness in ships.

Marie Stopes (1880 – 1958) was a paleobotanist, a person that studies fossilised plants, and taught fossil botany in the Beyer Building at the University of Manchester from 1904 to 1907.  She was the first female Lecturer in the Faculty of Science at the University and in 1905 became Britain’s youngest Doctor of Science.

Elizabeth Blackwell (1707 – 1758) was a Scottish botanical illustrator and author who was best known as both the artist and engraver for the plates of "A Curious Herbal", published between 1737 and 1739. The book illustrated many odd-looking and unknown plants from the New World, and was designed as a reference work on medicinal plants for the use of physicians and apothecaries.

The Armitt Sisters - Mary Louisa Armitt (1851 – 1911) was a polymath. She studied musicology, ornithology and social history. Annie Armitt (1850 – 1933) was a botanical illustrator, their oldest sister Sophia (1847 – 1908) was a botanist. They well gifted and well educated and set up a school in Eccles with Sophia becoming headteacher. In 1886 they retired to the Lake District, where they moved in intellectual circles. Mary died at Rydale Cottages, and after her death, The Armitt Library was founded on her bequest in order that the intellectual activity of Ambleside could be celebrated.

Annie Russell Maunder – (1868 – 1947) was a Northern Irish astronomer, specialising in solar activity. She studied at Girton College, Cambridge and worked at the Royal Observatory, Greenwich as one of the first 'lady computers' employed in the early 1890s.

Dame Miriam Rothschild (1908 – 2005) was a zoologist, naturalist, academic and eccentric who was the “Queen Bee “of research into parasites and their hosts. She grew up on the Ashton Wold Estate and was the first person to work out the flea's jumping mechanism. Because of her inherited wealth, she didn’t have to apply for grant funding and had no formal education. Her doctorates were always honorary and as such she was considered an amateur.

Kathleen Lonsdale (1903-1971) was an  x-ray crystallographer and the first of two women elected Fellows of the Royal Society in 1945, along with Marjory Stephenson.

Marjory Stephenson (1885-1948) was a biochemist and, along with Kathleen Lonsdale, was the first woman to be elected to the Royal Society in 1945.

Elsie Widdowson (1906 – 2000) was a British nutritionist.  She and Dr Robert McCance were responsible for overseeing the government-mandated addition of vitamins to food and wartime rationing during the Second World War.

Sarah Stone (1760–1844) was as an English natural history illustrator and painter. Her works included many studies of specimens brought back from expeditions to England from Australia and the Pacific. Her illustrations are the first studies of many species so make them highly significant in the world of science.