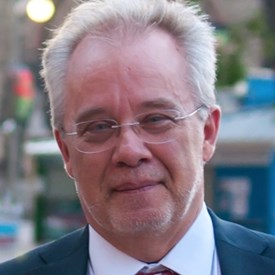 Donald B. Dingwell (born and raised in Newfoundland, Canada) is Chair in Mineralogy and Petrology and a founding member of the Center for Advanced Studies of the Ludwig-Maximilian-University of Munich. He is also Gutenberg Research Scholar at University of Mainz and distinguished visiting Professor at Xiamen University, China.

He has published ca. 500 papers on geomaterials, magmas and volcanism. His approach is fundamentally experimental and materials-based. His current research spans the structure and dynamics of silicate melts, the mechanistic interpretation of volcano monitoring and magma kinematics and the quantification of the role of volcanism in the Earth System.

He has received numerous scientific awards, medals and fellowships - most notably the Bunsen (EGU), Day (GSA), Hess (AGU), Holmes (EGU), Peacock (MAC) and Werner (DMG) Medals. He holds honorary degrees from UCL, Alberta and UNAM, is a member of the Royal Society of Canada, Academia Europaea, acatech, the Leopoldina, the Order of Merit of Germany and an Officer of the Order of Canada. He has been President of the European Geoscience Union (EGU) and the International Association of Volcanology and Chemistry of the Earth's Interior (IAVCEI), vice-President of the Academia Europaea and was the 3rd and last Secretary-General of the European Research Council.