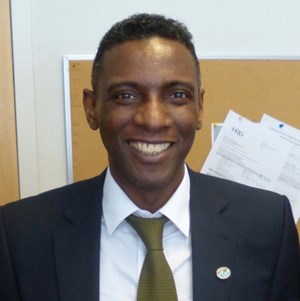 Dr Mark Richards is currently a Senior Lecturer and Head of Outreach within the Physics department at Imperial College London. He is a member of Imperial’s Equality Diversity & Inclusion Forum and also sits on the Board of Trustees for the British Foundation for University of the West Indies (BFUWI). Through outreach, Richards has fostered strong links with external organisations such as NASA/JPL, the US Embassy, and community based charities such as Generating Genius, CADSTI, Afro-Caribbean Diversity, and the Amos Bursary to name a few. Mark has also contributed to several media related projects through organisations such as the Institute of Physics, BBC, British Council, British Library, plus other groups across London and the UK.

Mark holds a BSc in Chemistry (Manchester), and a PhD in Atmospheric Physics (Imperial). He has a track record of cutting across traditional academic boundaries to explore multidisciplinary research, STEM education and outreach. Richards has also spent several years in industry across different sectors, including instrumentation, environmental science, ITC, and Finance. As a Post-Doctoral Researcher, he managed a Technology Transfer programme within the High Energy Physics Group and co-founded Duvas Technologies Ltd - an Imperial College spin-out company that specialises in wireless environmental monitoring networks, where he served as Business Development Director. Dr. Richards actively works to encourage students from underrepresented groups to consider further study and eventual careers in STEM (science, technology, engineering, and maths), often through highlighting achievements of other role-models in these fields.