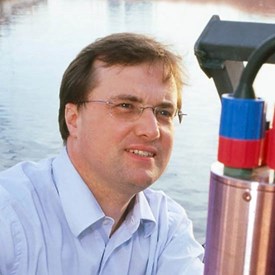 Timothy Leighton is a physicist and inventor whose motivation stems from a deep interest in the acoustical physics of bubbles. Through his research, Timothy has made notable contributions to diverse fields in industry, medicine, oceanography and the environment.

Taking inspiration from the way that dolphins hunt fish using bubble nets, Timothy developed the first sonar technique capable of detecting targets in bubbly conditions, such as those near the shore. His medical devices — a tool for monitoring kidney stone dispersal and a needle-free injection system — exploit his in-depth understanding of ultrasound and the collapse of bubbles, respectively.

In 2011, Timothy was awarded the Royal Society Brian Mercer Award for Innovation, and in 2018 was awarded the Royal Society's Paterson Medal. His well-received book, The Acoustic Bubble (1994). (Global-NAMRIP) and Health Effects of Ultrasound in Air (HEFUA). In addition to his Chair at the University of Southampton, he is a Director and Inventor-in-Chief at Sloan Water Technology Ltd, a company founded on his patents.