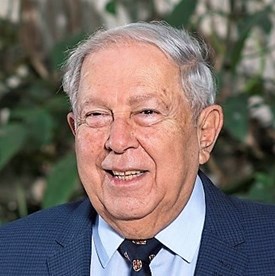 Yusuf Hamied is Chairman, Cipla, a leading pharmaceutical company established in India in 1935. He graduated with honours from Cambridge University in 1957 and continued to a PhD in 1960 under the tutelage of the Nobel Laureate, Alexander Todd.

Over the past 6 decades, he has been instrumental in the growth, development, implementation and adaption of science in the indigenous pharma industry in India. He has commercially synthesized many essential drugs by developing patent non-infringing processes in diverse areas, steroids, antibiotics, HIV/AIDS, respiratory and oncology drugs. In the late 1990’s, a major achievement was the novel syntheses of 3 anti-retroviral drugs and combining them into a single dose therapy, making treatment efficacious and affordable. This resulted in saving millions of lives in Africa alone.