Fundamental building blocks of the Universe

Fundamental building blocks of the Universe

How is the world made? Civilisations throughout history have tried to answer this question.

Our current best explanation suggests that everything is composed of just a few types of point-like elementary particles. The characteristics of these particles can be studied among the debris of cosmic rays, which constantly bombard the Earth, or in specialist laboratories, where particles are smashed together at high energies. A set of theories, known as the Standard Model of particle physics, has been extremely successful in describing experimental measurements to date, but unfortunately it has shortcomings; key predictions are unconfirmed, and the theories don't account satisfactorily for the way the particle content of the Universe has evolved. Researchers from the Universities of Birmingham and Cambridge are among the thousands of physicists working on experiments at the Large Hadron Collider (LHC) and elsewhere to address these limitations.

How does it work? 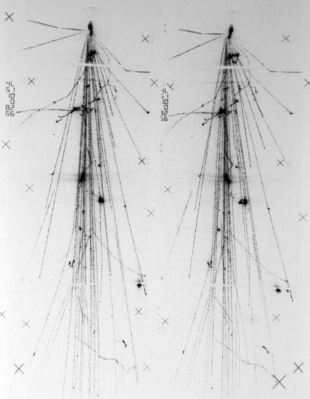 The Large Hadron Collider is a component of the particle-accelerator complex at the European Laboratory for Particle Physics (CERN), near Geneva, Switzerland. It uses powerful electric and magnetic fields to accelerate beams of protons or ions in both directions around a ring-shaped underground tunnel, 27km in circumference.

Beams travelling in opposite directions are made to collide in four caverns, each of which hosts one of the main LHC experiments: ALICE, ATLAS, CMS and LHCb. These use cathedral-sized detectors to record data for particles created in the beam collisions. The four experiments use different ways of detecting particles, increasing the discovery potential and allowing for cross-checking of results.

The LHC has been operating at world-record energies since November 2009. During this early phase of operation, the main focus for the experiments has been on reproducing results from earlier experiments, and ensuring that the detectors work as expected. As the data collected steadily increases, new results are starting to be obtained, including limits on production rates for new types of particle, and a major discovery may be just around the corner. Investigations at the LHC into the limitations of the Standard Model are complemented by the studies of smaller-scale, highly specialised experiments, both at CERN and at other laboratories.

Read more about this exhibit from the organisers