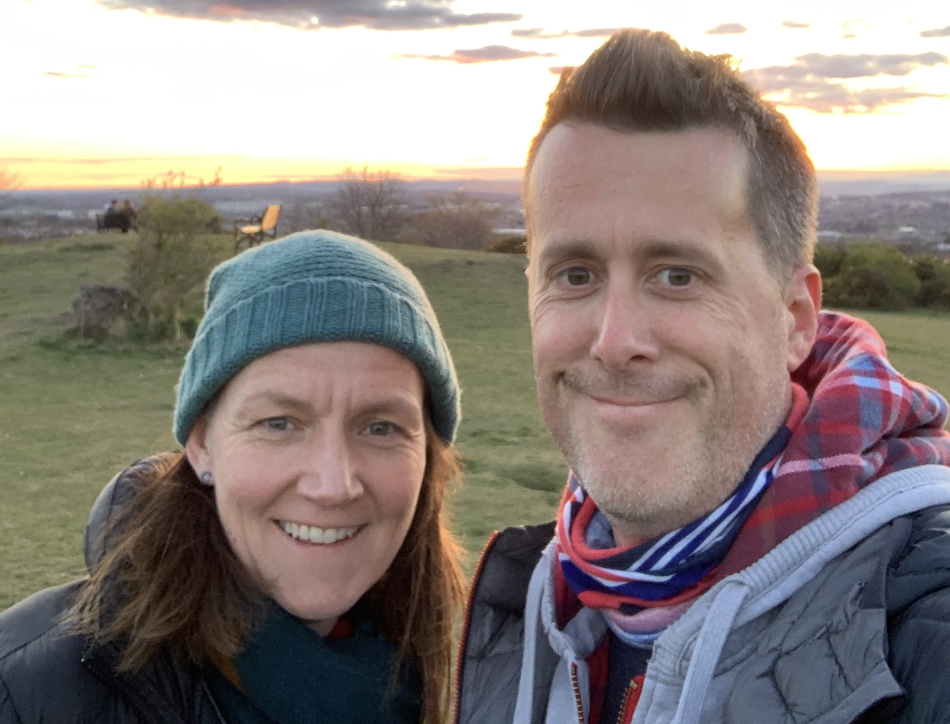 Adele Marston and Paul Palmer met as postgraduates – Adele a bioscientist, Paul a physicist – in Oxford, and developed their academic research careers in parallel. They began with post-doctoral positions at Harvard University, before rising to their current leadership and professorial roles at the University of Edinburgh. Adele will become Director of the Wellcome Centre of Cell Biology in December 2021, while Paul has been the Science Director of the NERC National Centre for Earth Observation since 2014.

Change for the better

With two children aged 16 and 12, the couple believe that over the past decade there has been a major cultural shift in expectations of working parents, one major advance being the introduction of shared parental leave in 2015.

Paul: “I think a lot has changed. My younger male colleagues are much more comfortable about taking time off and they take it really seriously, which is great. They’ll take six months’ leave and only interact with their group, and it hasn’t affected their career trajectories.”

Adele: “I think people now also have a lot more awareness of scheduling meetings at appropriate times and not having things too late so people can get away to school pick-up. The way that we always dealt with that was that one of us would say ‘I’ve got something late that day, so can you cover?’ These kinds of things can help, but it’s still challenging for working parents.”

Paul: “I’m not sure many universities are going over and above what they should be doing, but I think it’s beginning to change and that the younger generation will demand more from their university workplaces.”

Adele and Paul’s first child was born in 2005 near the end of their time as post-docs in the USA. The less-generous stateside maternity arrangements meant Adele had to return to work when their daughter was just a couple of months old. Their salaries couldn’t stretch to nursery care five days a week, and they remember a painful period of juggling the childcare of their young baby with full-time jobs.

Adele: “I still feel stressed when I think about it and remember how bad I felt. It was horrible. Paul went to work at 4am and came back at lunchtime, when I went to work, so we could both get six or seven hours of work in. The worst part was that usually we hadn’t slept all night. It was really challenging. Fortunately, it was only for a few months.”

Back in the UK it was difficult to find two suitable group leader positions in the same city. However, in 2006 Paul joined Adele at the University of Edinburgh. In 2009 they had a son, and family life settled into a rhythm.

Paul: “We alternated working extended hours to share the responsibility of childcare. I would pick the children at 5.30 from after school club two days a week.”

Adele: “Tuesday and Thursdays I could stay at work as long as I liked while Paul did the pick-up. It’s impossible to finish at a particular time when doing experiments in the lab, and in my mind those are still my research days.”

In later years, as the children became more self-sufficient and their parents’ careers gained momentum, travel for work became more of a feature. It’s something the couple have had to manage between them.

Paul: “I became a Distinguished Visiting Scientist at the NASA Jet Propulsion Laboratory in California in 2019 and I agreed with Adele that I needed to make fewer trips away but make them count. I go to California a few times a year, but I minimise my other travel commitments.”

Adele: “We both limited travel when the children were younger – initially me more so than Paul – but in the last couple of years I’ve done much more because I felt it’s been important that I go out and speak about my research.”

Being ‘grounded’ and forced to stay home by the COVID-19 pandemic highlighted the extent of Adele and Paul’s well-organised tag-team style.

Adele: “At the start of the pandemic the children observed that it was unusual to have both parents here all the time. Even if we weren’t travelling, often one of us will be working late or out for a work commitment. It was rare for both of us to be at home Monday to Thursday.”

While the couple believe the working culture has improved for parents, they cite time management and support as being key to cope with what is still a challenging juggle.

Adele: “Identify the things that are really important in your work and be really strict about prioritising them. You have a certain amount of time to do the work, and it might be less than you might like. You have to look realistically at what you can get done in that time and make sure you choose the things that are actually going to affect your career, rather than pleasing other people.”

Paul: “Learn to say no and find a good role model. You can easily get ground down in academia unless you keep the work in a broader context, and having to deal with those pressures while raising kids can be stressful. Find someone grounded to talk to, so you don’t get stuck.”