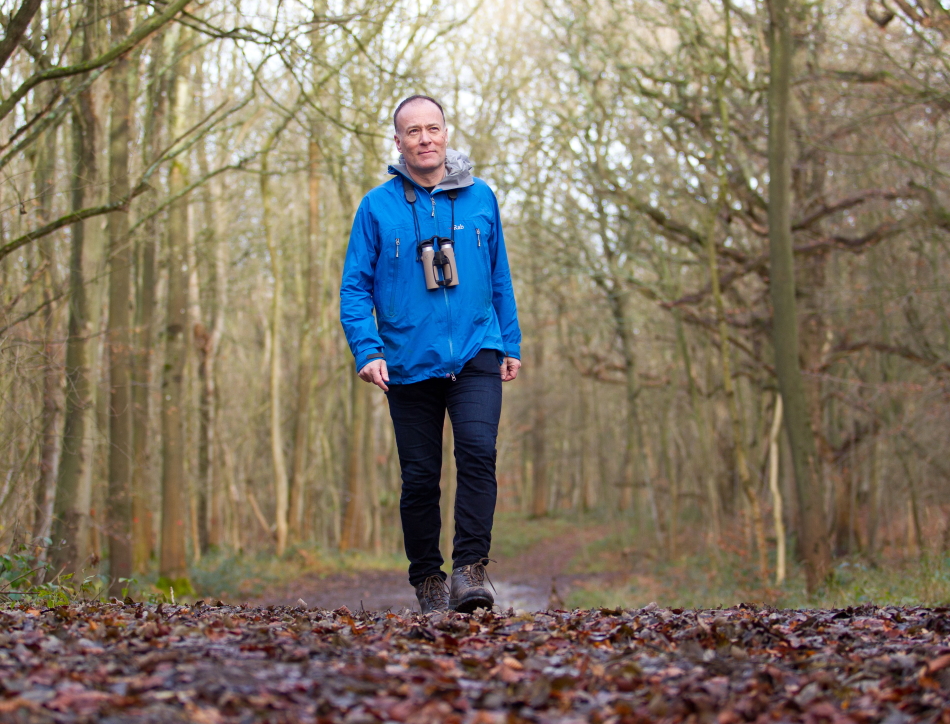 Since his PhD in 1992, Ben Sheldon’s research has centred on individual variation in natural populations – mostly wild birds – and how this variation impacts population-level processes. His love of birdwatching began in childhood. However, it wasn’t until mid-way through his Natural Sciences degree at the University of Cambridge that he realised he might be able to combine it with a research career.

“I realised that there was a whole set of deep scientific questions around the things that had fascinated me in natural history.”

After his PhD at the University of Sheffield, Ben relocated to Uppsala, Sweden, to take up a postdoc position. Here he met his Swedish partner, and then alternated between research positions in the UK and Sweden until they settled together in Oxford.

Back in the UK, with Ben a Royal Society University Research Fellow at the University of Oxford, their first son was born. By the time his baby brother arrived three years later, Ben had gained a Professorship and become Director of the University’s Edward Grey Institute of Field Ornithology.

“The flexibility of science helped in a long-term relationship for the first few years. Once we settled in the same place and had children, my partner’s career involved a lot of travel abroad. A supportive department coupled with the flexibility of research again made that possible.”

In 2008, Ben’s youngest son fell ill and was diagnosed with epilepsy and a brain developmental abnormality. This further emphasised the need for flexibility and support from colleagues and employers.

Alongside taking an equal share in parenting responsibilities, Ben progressed through leadership roles, becoming Head of the Department of Zoology at Oxford in 2016. Here he was quickly presented with a completely unexpected challenge.

“In 2017 we faced a major crisis. Our building was found to contain asbestos; we evacuated about 400 staff with one day’s notice, and permanently shut it down. We had to find short and long term logistical and practical solutions, and think strategically about the future direction of the department.”

Since then, Ben has played a major role for the University in liaising between contractors and users in the safe demolition of the old building, and planning a new £200 million university development in its place. At times, it’s meant he’s had to break his own rules for family life.

“My partner and I have always agreed that weekends should be ‘bookmarked’. But during the peak of the building crisis there was a lot of pressure on me and, unfortunately, I had to do a lot of out of hours work. It was difficult, and not sustainable long term.”

This time of professional difficulty came at the same time as family challenges. Having fought for a place in a special secondary school for their disabled son, the family then had to build an 80-minute school run into their day, every morning and afternoon for two years.  Ben took a proactive approach to make his work fit around this new routine.

“I did the school run one day a week and I was open with my department that I needed to do that. I made it a ‘no meetings’ day and I would work in nearby libraries and cafes while my son was at school. It wasn’t ideal, but the uninterrupted hours actually created a space in my week for certain kinds of work.”

This arrangement made family life that little bit easier, but Ben also felt it was an important example to set, and he has this advice for those struggling to grapple with the need for compromise.

“I think sometimes people struggle to feel they can take time off for personal reasons, but I think it’s really important to acknowledge to yourself how life and work interact. We’re all – including your more senior colleagues – people with families, and have constraints just as you will, and if we’re open and honest about that we build a more supportive environment. Things won’t be smooth all the time. We should accept that and know that it’s OK to say when you have to take time out for your family.”

During the COVID-19 lockdowns, Ben adapted to life’s challenges once more. While his research output has taken a back seat due to his leadership position, he rediscovered his love for natural history, and re-focused.

“Research had become too focused on sitting at my desk analysing data and writing grants and papers. I’d let my love for natural history slip. During lockdown I connected with that much more again: birdwatching locally and setting moth traps in my back garden.

“For decades I’ve travelled regularly with work, but in 2020 I didn’t take a single flight. Lockdown removed the frantic rushing around and I’ve been able to focus more on what’s happening in my local community and surroundings. I’m very keen to maintain that.”