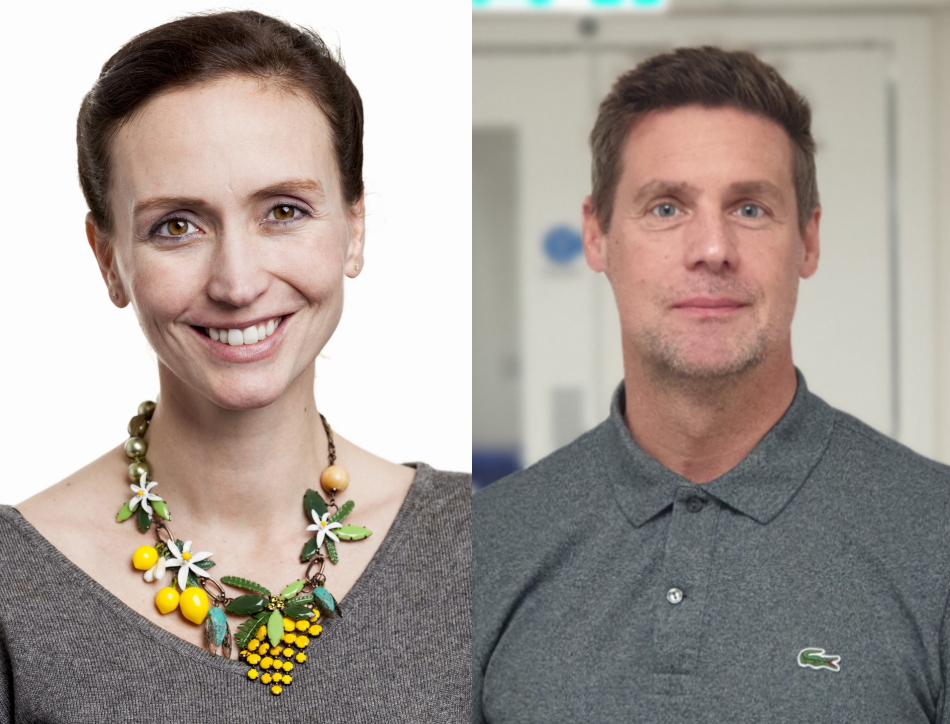 In 2014, Eileen Gentleman and Holger Auner were both on the brink of establishing their own research groups. Eileen’s research, at King’s College London, investigates the use of biomaterials to direct stem cell differentiation for tissue engineering. Holger is a molecular haemato-oncologist at Imperial College London and a physician at Hammersmith Hospital, specialising in multiple myeloma. It was such a critical time in their working lives that, when their daughter was born, neither felt they could take their foot off the pedal. As such, parenting duties were shared equally from the outset:

Eileen: “After the few months of maternity leave, neither of us was in the position to do more than the other. We’d both just got lab-establishing fellowships, so splitting childcare 50:50 was the only option. If we weren’t equally sharing, one of us wouldn’t have a career.”

Bringing in the baby

Before a nursery place became available, Eileen was inspired to use a childcare solution modelled by a former boss, who brought her baby and nanny into work with her every day.

Eileen: “There were four months when we had no childcare after my maternity leave, but I still had students, I still had post-docs, I still had a lab, so I couldn’t just not show up. I had to make sure things were ticking over. We had a set-up for the baby in both our offices, and I would have her on my front in a baby carrier during my meetings.”

Holger: “Now it might be different, you’d just work from home, but until 2020 it was inconceivable to have all these meetings online. Once she was at nursery we still brought her in sometimes, when it was closed or she couldn’t go for any reason. She’s always loved coming to the office, but usually it means we don’t get much done.”

Eileen agrees; while it was a pragmatic childcare solution at the time, and their Heads of Department were supportive, it wasn’t easy to be productive.

“At the time it was very stressful. I was a fellow, I was supposed to be delivering, but basically I wasn’t getting any work done, only doing emergency work. I don’t know how we managed it, we just did.”

Once in the nursery at Hammersmith Hospital things settled down for a while. Then the nursery closed, and they had to re-settle their daughter into a new place that involved a two-hour commute.

Holger: “Our Heads of Department were always very supportive, but having no nursery on site showed that there wasn’t fantastic support from the institution. I’m now co-Chair of the departmental Equality, Diversity and Inclusion Committee due to that experience – I’m trying to push change forward.”

Eileen: “We had to move her to a different NHS nursery, at neither of our workplaces. It wasn’t great, we were exhausted all the time from the travelling.”

Holger: “There was a very complex timetable of drop offs and pick-ups. I still can’t believe we never forgot to pick her up.”

The power of networks

Life became much simpler when their daughter started school in 2016, and the couple’s research careers could begin to motor once more. Holger was awarded a Cancer Research UK Advanced Clinician Scientist Fellowship in 2019, and both were promoted to Reader positions in 2020.

However, both feel that their careers haven’t advanced as quickly due to the compromises that parents choose to make. Not only due to the periods of low productivity, but perhaps more crucially, due to the conference culture in science.

Holger: “Not travelling has had an impact. If you really truly do split the parenting 50:50 you can’t just disappear off for a week’s conference. If you go, you just go for two days or three days and just try to squeeze in the most important scientific part of the conference, but not the dinners or drinks.”

However, it’s those social occasions when your network is enhanced, when introductions are made and informal conversations lead to collaborations or invitations.

Eileen: “That’s where I’ve taken the hit, from networking-based things. I get invited to fewer things, I’m on fewer editorial boards, compared to the level of my CV. I see people with fewer high quality papers than me in these positions, and it’s always from meeting people at conferences.”

As their daughter gets older, the juggle between work and parenting has become easier. As well as the ease of managing the local school run, there are many fewer unexpected interruptions to the working week due to sickness or other issues. While the couple are keen not to look too far ahead, they know that – as a strong parenting team – they’ll be able to go with the flow.

Holger: “We’re confident that we can adapt; we’ve adapted regularly and constantly.”