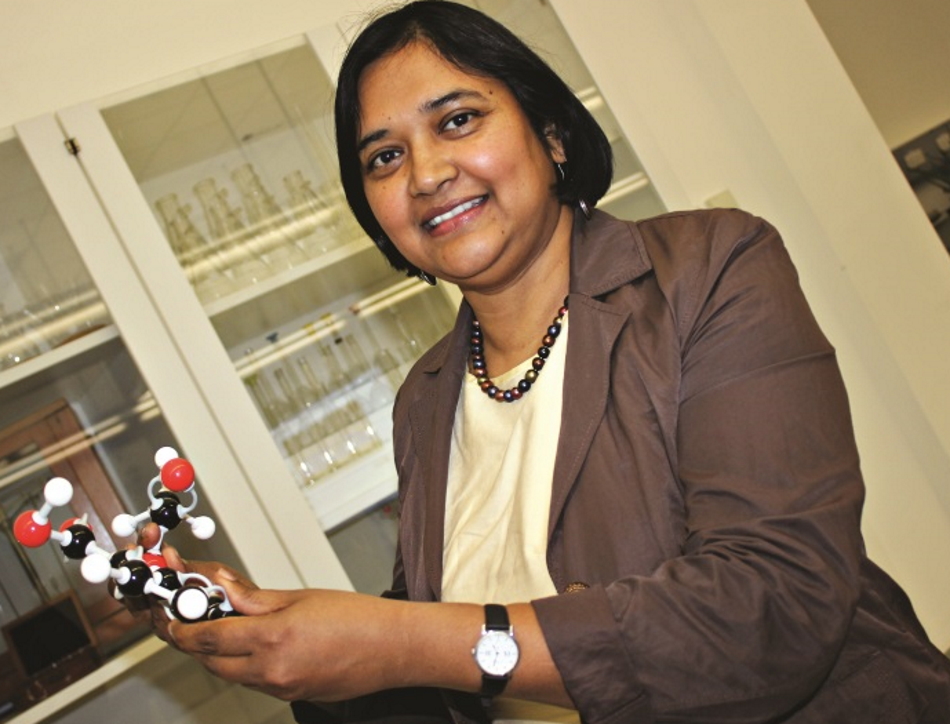 Chemist Nazira Karodia became Vice Principal for Learning and Teaching at Edinburgh Napier University in 2021. She says she feels amazed and delighted to have reached positions that are enabling her to influence change in UK higher education.

This is perhaps particularly true for Nazira, whose twin daughters grew up with the blood disorder sickle beta thalassemia. One of Nazira’s daughters died of the condition in 2012, one day before her 22­nd birthday­.

The twins were born just after Nazira had completed her Master’s degree in chemistry at the University of Natal in South Africa. Choosing to stay at home during their infancy, Nazira used this time to decide on her first step into a career.

"I wanted to do a PhD in a new area, and that meant I would need to move from our hometown. As my husband and I talked, we thought, ‘Why not be adventurous and go further afield? Take the twins on a trip!’ I remembered someone had told me what a nice place St Andrews was, and a nice place to bring up children. I applied to the university and got a scholarship."

Nazira’s husband – a social scientist – took a sabbatical to look after the twins in Scotland, but the couple realised that they needed to decide on the longer-term childcare arrangements. The girls’ sickle cell disease would cause crisis points that put them in hospital with excruciating pain. Nazira and her husband wanted to always be there for the girls, so they had to make a choice.

"We thought, being in STEM, I would be able to secure posts more easily than he would. We took a joint decision to invest in my career, while my partner assumed the role of the at-home parent."

After post-doctoral positions in Florida and St Andrews, Nazira’s first permanent position was as a lecturer in chemistry at the University of Bradford. While her husband was the primary carer, Nazira ensured she was also present as much as possible, in good times and bad.

"At half terms I would take my annual leave and arrange my teaching so colleagues would cover. That’s where I think the good working happens in universities, when you’re able to have those flexible arrangements. I did quite a lot of work in the evenings, but at weekends and holidays I didn’t compromise. I was available for my students in an emergency, but I didn’t bring work home. And when the girls were in hospital, both of us would be with them."

Up the ladder, and across

One step at a time, Nazira ascended the career ladder at the University of Bradford. This rise came with her increasing diversification into science education and inclusion in STEM, which became her parallel, and then predominant, research focus alongside her work in green chemistry. In 2015 she moved to the University of Wolverhampton as Professor of Science Education, where she was promoted to Pro Vice-Chancellor of Regional Engagement in 2020.

As Nazira’s career was flourishing, the twins both left home to go to university in York and Edinburgh. It can be a difficult time for any parent, but their health issues made it particularly hard for Nazira and her husband.

"I was really proud of their achievements, but you can imagine the constant underlying worry. We did a lot of planning, to make sure one of us could go to York or up to Scotland at short notice. We had this arrangement that we would have daily touch points to let us know how they were feeling. Often just a smiley face on a text message. But they also needed to be free to enjoy being students, without us transmitting our worry to them."

It was in the Easter break of her daughter’s final year at York that one of the twins suffered an episode from which she was unable to recover.

"It looked like any other trip to the hospital, but the sickling became worse. The whole family were with her when she died.

"It was really difficult for us to get back from that, but her sister went back to university to finish her exams, and if she could do that, I could go back to work. It was good to have work to throw myself into."

As Nazira reflects on the suitability of a career in science for a happy family life, she says that there’s no single way to make it work, and you must give it attention and effort.

"Science work, especially for those involved in laboratory research or long hours of computational effort, may demand more time than other academic endeavours. So family life becomes a project rather than something taken for granted. Each parent or set of parents will make different choices depending on their values, support systems and their career trajectories. My hope for them would be as rich a family time as possible, something that may need effort and planning."