Sang-Mook Lee was at the pinnacle of his scientific career when an accident left him quadriplegic. Far from being diminished by his disability, he now leads a more fulfilled life, and his fortunate position has given him the power to influence major change. 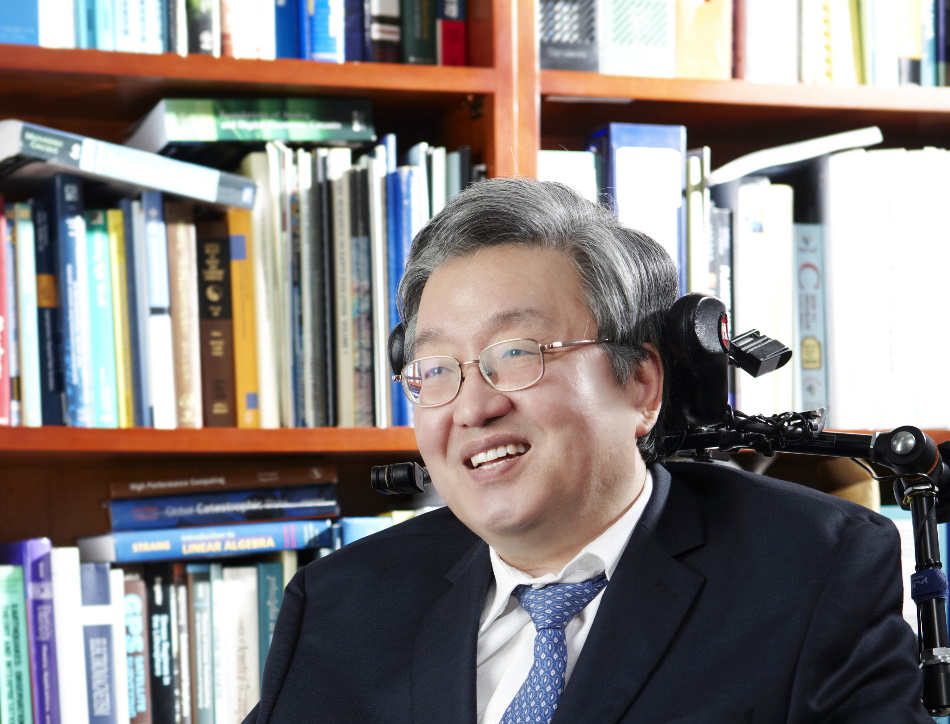 Free spirit in a rigid system

Born in South Korea in 1962, Sang-Mook Lee was a curious child who enthusiastically pursued his interests. When his father's work took the family to live in Jakarta for several years, Sang-Mook embraced the experience, but found life difficult when he returned to Korea, aged 13.

"I wasn't cut out for the rigid Korean schooling. I came back from Indonesia something like Tarzan! I was at the bottom of my class, and no-one expected me to succeed. My parents were highly educated, but they let me wander freely. They saw something in me, and they didn’t worry too much if I did badly in test scores."

Having allowed Sang-Mook to follow his heart through childhood, his father unwittingly fixed his son's future direction in a single exchange.

"At 16, I recall having our first real man-to-man conversation. He suggested that I do a science that nobody else was doing, like oceanography. It seemed very futuristic."

From that evening, Sang-Mook began plotting his life's course towards this goal. He gained an undergraduate degree in oceanography from Seoul National University, before completing postgraduate positions in the US and UK.

While he was away, Seoul hosted the 1988 Summer Olympics, which kickstarted an economic boom. In 1998, Sang-Mook was invited to return to his homeland, to carry out research from the government's new state-of-the-art research ship.

"I was King of the Ship. A pirate, roaming the Western Pacific! It was wonderful. I could think of a research question and set sail to test it. Every day was new. I didn't even notice the seasickness or tiredness that comes with a month-long voyage. Our first cruise was for seven days. I was so excited, I didn't sleep for the first four."

A twist of fate

Despite his reluctance, Sang-Mook became Assistant Professor at the University in 2004. Less than two years later, on a field trip in California, he was driving across the desert when his vehicle flipped over. He was in a coma for three days, and sustained a spinal cord injury that paralysed his body from the shoulders down. However, it was the impact of the experience on his philosophy that Sang-Mook says was the most fundamental change.

"It was like Scrooge in 'A Christmas Carol', to see myself in death. The experience didn't feel scary or bad, and after the accident I became a different person. Before, I was trying to become number one in my field like everybody else. I was running full speed one way. Now I have a bigger purpose. It has let me see the wholeness of life."

A platform for making change

Disability is often hidden away in Korea, but Sang-Mook's position at the University brought a status that propelled his story into the public eye. He became a national icon, known as the 'Stephen Hawking of Korea'. This gave him a position of influence, for instance through running a multimillion-dollar government programme to develop assistive technologies.

Sang-Mook uses a wide range of such technologies himself. A mouse positioned near to his mouth, which he controls by sipping and puffing, enables him to operate his computer and phone. Sang-Mook knows that, alongside education, devices like these can open up computational careers to people with disabilities.

"There is nothing more important than education, so [through the government programme] I also invested in education for students with disabilities. The computer is God's gift to people with disabilities, so I established an interdisciplinary computational science programme at the University."

The programme equips students with the skills to apply computational techniques – such as mathematical simulation and artificial intelligence algorithms - to any field.

As well as his work in education, Sang-Mook is proud of his role in changing the scientific system in Korea; securing legislation to give non-government scientists access to the country's best research vessels.

He jokes that having broadened his interest in everything life has to offer, it’s ironic that the thing he now finds most difficult to fit in is being a true research scientist.