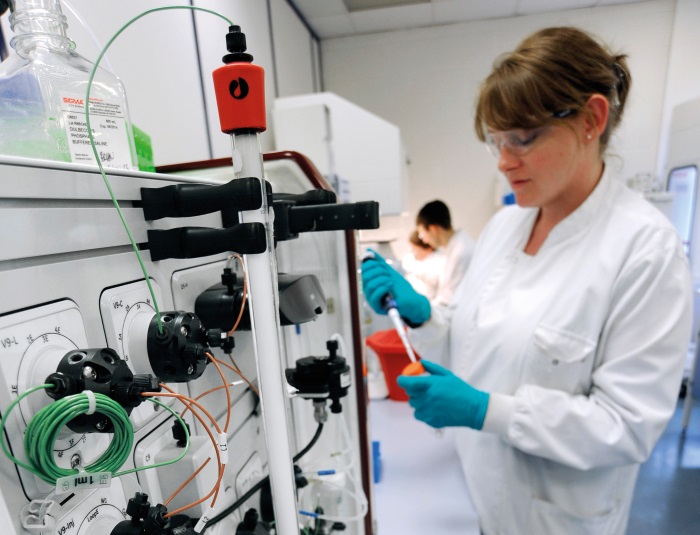 Designing a ‘base paint’ to fight cancer

Immunocore is harnessing the body’s own immune cells to fight cancer. Chief Business Officer Eva-Lotta Allan says that “the company was working on cancer immunotherapies well before it became fashionable.” That work is now paying dividends, with positive results for their first clinical trials recently announced.

The biotechnology underpinning Immunocore is based on the science of founder Dr Bent Jakobsen, who until 2000 led his own research team at Oxford’s Institute of Molecular Medicine. His work in the 1990s led to an initial spin-out company named Avidex, which did much of the early development work. In 2008, Immunocore was created with Avidex’s intellectual property and many of the original scientific team. Since 2008 a total of £32 million has been raised to fund Immunocore’s activities, with further significant income coming from partnerships.

With approximately 150 employees, Immunocore is typical of the SMEs that dominate the UK’s medical biotechnology sector. In 2014, the sector consisted of an estimated 1,000 companies generating turnover of £4.8bn and employing 23,000 people. Over the period 2009-2014, the sector has seen 4.3% annual growth.

Innovative development of Jakobsen’s work led to Immunocore’s biological drugs that recruit T cells in the bloodstream to kill cancer cells. They are known as ImmTACs and are bispecific as they are able to connect to both T cells and cancer cells.

Immunocore’s technology is highly competitive; “there are very few companies that have managed to design similar bispecific drugs yet” says Eva-Lotta Allan. She describes their drugs as a potential ‘base-paint’ cancer treatment. Their low toxicity makes them ideal to be used in combination with other drugs.

Immunocore has secured significant income from partnership deals with leading pharmaceutical companies, who are currently taking a big interest in cancer immunotherapy. But the company is also developing its own drug pipeline and is now running its first clinical trials for a cancer drug which could be on the market in a few years.

The technology has potential for a wide spectrum of cancers and beyond, to treat viral infections and autoimmune diseases. The company continues to be heavily research led, with ~85% of staff in research roles.

According to Eva-Lotta Allan, many smaller biotech start-ups are quickly acquired by bigger companies, “a common reason why European biotech companies often fail is because they are not optimally funded to expand”. She adds, Immunocore’s ambition is to become a premier global biotechnology company and a leader in the field of cancer immunotherapy.