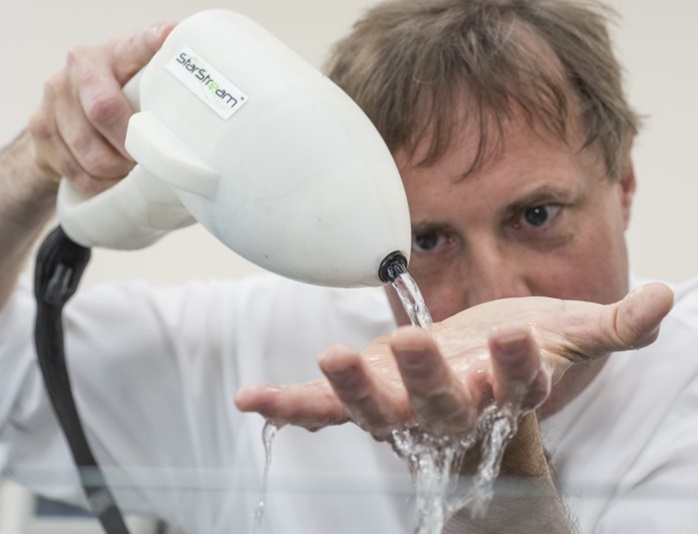 Antimicrobial resistance (AMR) is an increasingly serious threat to global public health that requires action across all government sectors and society. The threat of a post-antibiotic age means that new ways of cleaning and sanitising at the microbial level will become important. But Professor Leighton cautions against using only chemical approaches to this problem: “microbe populations can become resistant because we leave ‘smoking guns’ in our water run-off, giving clues as to what killed the previous bugs. These ‘clues’ in sub-therapeutic concentrations might assist the vast reservoirs of microbes in our water and sewage systems to develop resistance”

Professor Leighton specialises in ultrasonics, underwater acoustics and engineering, and is interested in the environmental applications of this work. Enhancing the cleaning properties of water by infusing it with sound waves, he and his colleague, Dr Peter Birkin, built a laboratory device capable of cleaning at the microbial level, with low usage of cold water and without any chemical additives. The key to the technology is to infuse a trickle of cold water with microscopic bubbles and particular frequencies of sound.

Professor Leighton and Dr Birkin received the Brian Mercer Award for Innovation in 2011, and partnered with Ultrawave to develop the device from a functional laboratory technology to a user-friendly prototype – StarStream. In parallel, Professor Leighton’s research team tested its cleaning capability in three areas: removal of dental bacteria, removal of soft tissue from pre-transplant bones, and removal of CJD contamination from surgical instruments.

StarStream is an especially important innovation in the fight against AMR. Professor Leighton explains: “StarStream doesn’t leave a trace of anything in the water supply. There are no chemicals to tell the bugs what was used to kill their predecessors.” Extensive testing and further product development conducted through the award has brought the technology close to commercialisation: Ultrawave aims to bring StarStream to the market as a generic cleaning device in early 2016, while Professor Leighton’s team will co-develop subsequent versions for more specific application in the biomedical sector.

The interdisciplinary team that developed StarStream has formed the basis for a strategic research group on AMR at the University of Southampton (Network for Anti-Microbial Resistance and Infection Prevention – NAMRIP), which secured first £50,000 of university funding, followed by an additional £868,000 through the EPSRC. NAMRIP now funds other research and commercialisation activities aimed at tackling the growing challenge of AMR. These include collaborations, one with IBM to develop cognitive computing to assist tackling AMR, and commercial projects to increase the efficiency of AMR diagnostics.