6. Climate is always changing. Why is climate change of concern now?

All major climate changes, including natural ones, are disruptive. Past climate changes led to extinction of many species, population migrations, and pronounced changes in the land surface and ocean circulation. The speed of the current climate change is faster than most of the past events, making it more difficult for human societies and the natural world to adapt. 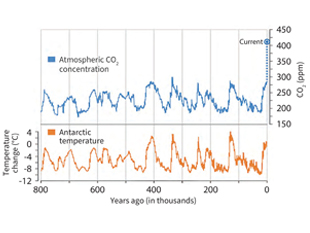 The largest global-scale climate variations in Earth’s recent geological past are the ice age cycles (see infobox, p.B4), which are cold glacial periods followed by shorter warm periods [Figure 3]. The last few of these natural cycles have recurred roughly every 100,000 years. They are mainly paced by slow changes in Earth’s orbit, which alter the way the Sun’s energy is distributed with latitude and by season on Earth. These orbital changes are very small over the last several hundred years, and alone are not sufficient to cause the observed magnitude of change in temperature since the Industrial Revolution, nor to act on the whole Earth. On ice-age timescales, these gradual orbital variations have led to changes in the extent of ice sheets and in the abundance of CO2 and other greenhouse gases, which in turn have amplified the initial temperature change.

Recent estimates of the increase in global average temperature since the end of the last ice age are 4 to 5 °C (7 to 9 °F). That change occurred over a period of about 7,000 years, starting 18,000 years ago. CO2 has risen more than 40% in just the past 200 years, much of this since the 1970s, contributing to human alteration of the planet’s energy budget that has so far warmed Earth by about 1 °C (1.8 °F). If the rise in CO2 continues unchecked, warming of the same magnitude as the increase out of the ice age can be expected by the end of this century or soon after. This speed of warming is more than ten times that at the end of an ice age, the fastest known natural sustained change on a global scale.