Team Impact - 'Tinder for researchers: building a research impact culture from the grassroots' 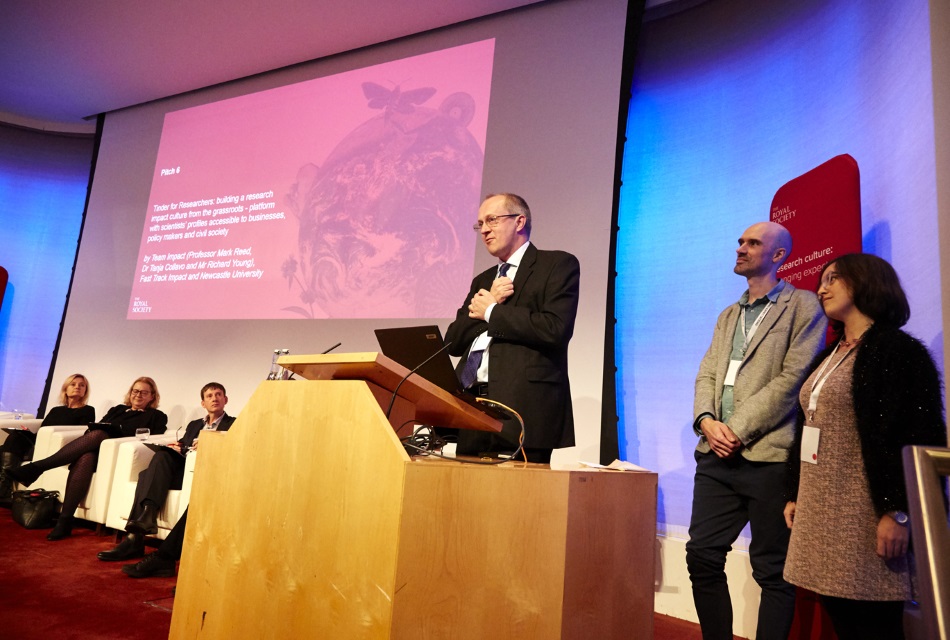 Tinder for researchers: building a research impact culture from the grassroots

A platform with scientists’ profiles accessible to businesses, policy makers and civil society

Do you ever come up with a genius idea - that if you only had enough money, expertise or power, would surely change the world? If so, then you have a lot in common with many of the world’s researchers. We have spent our careers working with the some of the cleverest people in the world, from philosophers to physicists, and they all share the same problem: having good ideas is not enough to change the world. And at this point in history, the world needs good ideas like never before.

There are more researchers in the world today than ever before, producing more research than has ever been seen, so with all this brain power, why aren’t we innovating our way out of these global challenges? To be fair, much progress has already been made, with many researchers at the forefront of life-saving technologies we couldn’t have imagined a decade ago. But these researchers only represent a small proportion of the global research community. Imagine how much more we could do if we could harness the collective wisdom of this whole community. We could do amazing things.

But there are good reasons why this is not happening. Many researchers went into research out of curiosity, not because they wanted to make the world a better place, and Universities have historically rewarded publications and grant income rather than benefits to society from research. Those who do want to engage with the outside world have to fight against growing demands on their time to find space to engage effectively with impact. But things are changing, and as more and more researchers are encouraged by their institutions and funders to consider the non-academic impact of their work. Now, as we enter an apparently “post-truth” era, there is a growing movement of researchers taking to social media, and in some cases to the streets, to ensure their evidence is seen and heard by the people who need it most. As this thirst for engaging with the public and stakeholders grows, we need new ways of enabling researchers to connect with the people who need their knowledge most.

What if there was a way to filter and then connect questions from the people with greatest need to the researchers who have evidence-based answers? We will do this by developing an online matchmaking platform (in the style of Tinder), complemented in the near future by personalized offline brokerage services, that connects researchers with businesses, practitioners, policy-makers and civil society organisations, to deliver evidence-based answers to questions that deliver real-world impact. A beta version app, and connected offline brokerage service, will be developed by Richard Young and Dr Tanja Collavo (through their Oxford technology start-up Univate), with evidence-based impact guidance for researchers integrated to the offer by Professor Mark Reed (Newcastle University and Fast Track Impact).

The app will be promoted via Professor Reed’s international researcher network via the largest impact training programme in the world and via Dr Collavo and Mr Young’s collaboration with Oxford University. This unique connection will inspire, equip and empower researchers from every discipline to engage with the public and stakeholders in new ways. We will contribute towards a growing grassroots revolution to build a UK “impact culture” that is led by researchers rather than funders or governments. Rather than seeing impact as an additional burden on already over-stretched researchers, we will reframe impact as an opportunity to be inspired and creatively challenged by real-world problems that require new ways of thinking.

We will use the £1000 prize money to implement the idea via a series of market research and beta testing workshops with researchers and organisations from different sectors of the economy, including small and medium sized businesses, third sector organisations and professional practitioners (e.g. teachers, consultancies, conservationists). Findings from these workshops will feed directly into further development of the app (and of the associated offline brokerage service), the development of in-app impact guidance for researchers, integration of the platform into impact training for researchers and a wider marketing strategy to drive widespread adoption of the app across the UK research community.