Keith Moore speculates on why H.G. Wells never became a Fellow of the Royal Society. Was the great science fiction writer and populariser of science the victim of an injustice?

In Wells's 'The Time Machine' (1895), the protagonist, an unnamed, fictional scientist (and FRS), first betrays the novelist’s long and unrequited love affair with the Royal Society.

I’ve just finished reading Michael Sherborne’s excellent new biography H.G. Wells: another kind of life. In my teens you could still buy out-of-print editions of the then-unfashionable Wells novels at Robinson’s bookshop at the Grainger Market in Newcastle-upon-Tyne, and that’s what introduced me to the great man.

My first full H.G. Wells title was the Ernest Benn edition of The complete short stories, a beautifully produced book which I still have. It contains the first of the scientific romances, The Time Machine (1895) in which the protagonist, an unnamed, fictional scientist (and FRS) first betrays the novelist’s long and unrequited love affair with the Royal Society.

As Another kind of life makes abundantly clear, Herbert George Wells (1866-1946) wasn’t used to unconsummated relationships. It is one of those cases where the index to Sherborne’s account is probably as much as you need to know ('marries Jane p.110; is unfaithful to Jane pp.110-111'). The unaccountable attractiveness of the pudgy, high-voiced and opinionated Wells is the only area where Sherborne is left reaching. In his foreword to the book Christopher Priest notes that Wells’s lovers thought he was scented with honey, but by that measure Winnie-the-Pooh would be right up there with Johnny Depp as an international pin-up and I’d tend to blame the condition on Wells’s mild diabetes anyway (intriguingly Wells taught the young A.A. Milne. It couldn’t be, could it?).

In contrast to his convoluted love-life, Wells single-mindedly courted the Royal Society for almost fifty years, confessing in his own Experiment in autobiography (1934) that it was the one honour he craved. It almost happened too, because by the 1940s several Fellows expressed support for his election: Julian Huxley, of course, but also the geneticist J.B.S. Haldane (1892-1964) and the evolutionary palaeontologist Wilfred Le Gros Clark (1895-1971). 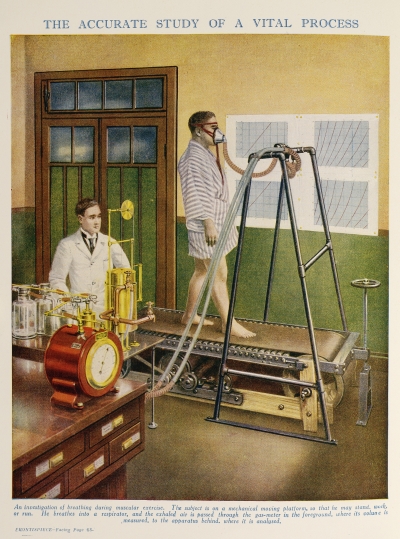 An investigation of breathing during muscular exercise, from Wells, H.G., Huxley, Julian and Wells, G.P. 'The science of life' (1930)

I can understand why Wells never made it as an Honorary Fellow – the election under statutes came at the wrong time – but I can’t help thinking that this most scientifically-concerned writer was done a slight injustice. He was a truly great populariser. The science of life (1930), written with his son Gip Wells (who did become a Fellow) and Julian Huxley (1887-1975), was a bestseller but by the Forties his greatest artistic and predictive fictions were another wartime away.

And yet still, he was capable of outstanding flashes of both brilliance and courageous mud-slinging. Wells really earned his place on Hitler’s black-list, while his drafting of the Declaration of the rights of man (1940) helped to turn world opinion towards what would become the UN’s Universal declaration of human rights (1948). Wells’s codicil to the Sankey declaration, A charter of scientific Fellowship (1942) is worth a look too. One way or another, H.G. Wells just couldn’t get the idea of Fellowship out of his mind.