How not to cook your goose

Read more about a bizarre example of an experimental cooking technique found in our book collections.

Right, nearly there: tree up, cards written, presents purchased and wrapped. I’m sure your plans, like mine, are now turning to the preparation of Christmas food, so I thought I’d share with you a bizarre example of an experimental cooking technique that I found while browsing in our book collections...

Right, nearly there: tree up, cards written, presents purchased and wrapped. I’m sure your plans, like mine, are now turning to the preparation of Christmas food, so I thought I’d share with you a bizarre example of an experimental cooking technique that I found while browsing in our book collections. As you probably don’t live in the appropriate geothermal zone to “try this at home”, I won’t include the standard warning, but for one intrepid Victorian traveller, it could all have gone so horribly wrong…

The gentleman in question is Commander Charles S Forbes of the Royal Navy, whose ‘Iceland: its volcanoes, geysers and glaciers’ (1860) can be found in the ‘Travel’ section of our Royal Society book stacks. Forbes – as with many other visitors to this fascinating country – appears to have developed a particular interest in the wild volcanic geology of Iceland and, in chapter 13 of his book, he recounts how he hired a guide and horses and set off to see the Great Geysir.

At this point, the idea of ‘Geyser cookery’ seems to have found its way into Forbes’s mind (I’m copyrighting that phrase, by the way, and will pitch it to Channel Five as their next Danny Dyer show). Feeling the pangs of hunger, but aware that the Great Geysir only erupted once a day on average, he purchased some mutton from the local priest, bagged himself a few birds in the adjacent marsh, and turned to the nearby ‘Strokr’, as he called it:

“I undertook … to avail myself of the natural cooking resources of the country. I collected a considerable pile of turf at the mouth of the Strokr, and then, taking my reserve flannel shirt, packed the breast of mutton securely in the body, and a ptarmigan in each sleeve … I administered what I supposed would be a forty-minute dose of turf to the Strokr, and pitched my shirt containing my dinner into it immediately afterwards”.

While waiting for the Strokr to blow, Forbes handed out the brandy and fell to reminiscing: “my memory carried me back to the hospitable board of a warrior prince, since murdered in the Caucasus, who always gave me, before breakfast, pickled onions and London gin”. Yes, feel free to insert the phrase, “I’m afraid that I was very, very drunk” at this point – I’m convinced from his prose style that Commander Forbes must have been an ancestor of my favourite Fast Show character, Rowley Birkin QC, who also appears to have a connection with Icelandic tall tales.

At any rate, Forbes appears to have remained sober enough to get out of the way when, just over forty minutes later, the Strokr erupted with full force, and:

“surrounded with steam and turf-clods, I beheld my shirt in mid air, arms extended, like a head and tail-less trunk … After about a quarter of an hour, in a temporary lull, I recovered my garment, and turned the dinner out on the grass before my grave guests, who immediately narrated a legend of a man in his cups who had fallen into the Strokr, being eventually thrown up piecemeal … The mutton was done to a turn; not so the ptarmigan, which I expected to be somewhat protected by their feathers; they were in threads. As for the shirt, it is none the worse, save in colour, the dye being scalded out of it.” 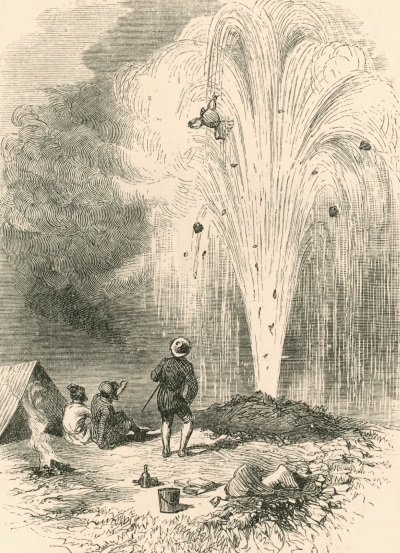 Engraving of the geyser eruption from Forbes’s book.

So, one good helping of mutton, a brace of inedible birds, a whitened shirt, and a slightly ruffled Victorian adventurer with another tall tale to tell. Please, dear readers, stick to turkeys and ovens this festive season, and stay away from geysers if you’ve been on the brandy. We look forward to showing you further wonders from our collections in the New Year; in the meantime, a very Merry Christmas from the Library team at the Royal Society.