Read more about the story behind a less-than-conventional image from the Royal Society collections.

At the Royal Society in 1896, on the same day, fathers of cinema and television were accidentally thrown together...

The Society has very rich image collections and recently I’ve been recording all manner of material that will end up on the Society’s picture database. Having recatalogued and rephotographed the Society’s oil paintings in preparation for their launch on the BBC Your Paintings site later in the year, we’ve moved to other, less conventional imagery. Here’s one with a story attached – an early x-ray photograph of Sir William Crookes’s hand. 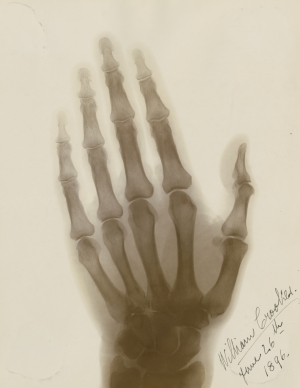 Röntgen-ray images such as this enjoyed a brief craze in the later 1890s – no-one had seen inside the living human body in such a way before, so it’s a nice moment in the history of photography. At the Royal Society’s soirée on 6 May 1896 (the forerunner of today’s Summer Science Exhibition) visitors could have their bones revealed and printed and “other hidden objects, such as the coins in a purse, the contents of closed boxes, and such like”.  Amusing to think that airport security was invented before the aeroplane.

The man taking these pioneering radiographs was the engineer Alan Archibald Campbell Swinton (1863-1930), later a Fellow of the Royal Society. He took the first x-ray images in Britain in January 1896 and by a year later the medical professions were bringing him surgical cases for analysis. Swinton was not a professional photographer for long however – he was an altogether more remarkable individual as we shall see. But his exhibition stand at the Royal Society must have been great fun, using Crookes’s vacuum tube (a type of cathode ray tube) to look at the hand that invented it.

I’m not convinced that the original brochures for these Burlington House-based exhibitions have ever been thoroughly researched, so in looking at the description of Swinton’s exhibit I had a quick browse to see what else was going on. One of the reasons the soirées are so interesting is that they are the one arena in which women of the period could participate in Royal Society science, as visitors or exhibitors. Since we’re holding a ‘Women in science Wikipedia workshop’ on 19 October, it’s good to have some original material to think about.

But what I discovered was quite different. A couple of pages from Swinton (exhibit no.1) was a display featuring rapid photographic printing machines (exhibit no.15) by none other than William Friese-Greene (1855-1921), lauded upon his death as the inventor of cinematography, and mythologized by Robert Donat in the movie The Magic Box (1951). Now if Friese-Greene’s achievements were oversold by cine-enthusiasts, A.A.C. Swinton’s were quite forgotten on his death. Specifically, he predicted exactly how another magic box would work, in a letter to Nature published on 18 June 1908. He called it ‘Distant Electric Vision’, but we know it now as television.

So there you have it. At the Royal Society in 1896, on the same day, fathers of cinema and television were accidentally thrown together. Now I’m quite aware that individuals rarely make new technologies, although we love to give someone the credit. Invention is a mix of many ideas by many people, years of research and plenty of hard development work. And yet this still gave me a little frisson.  Both men were photographers so surely they would have met? And talked? Where were those cameras…