One of Merian's most famous illustrations (and not for the squeamish) is of leaf-cutter ants and a bird-eating spider happily tucking in. You get the feeling that she would have no problem retrieving little critters from the bathtub.

The recent Royal Society wiki edit-a-thon on ‘Women in Science’ was very successful in improving the records of 20th century scientists held in the online encyclopaedia. With honourable exceptions, the event didn’t look any earlier than that, although in the follow-up panel discussion, biographer Richard Holmes gave an impressive overview of many historical figures.

This led me to do some cursory searching to see what the wiki-quality might be on earlier women scientists and I was pleasantly impressed by one of them: that for the German entomologist Maria Sibylla Merian (1647-1717), also a superb natural history illustrator.

There are many great book illustrators to choose from, but if you read the wiki entry you’ll perhaps understand Merian was a cut above most. She was a serious scientist and has been the subject of several recent books and an excellent exhibition at the Getty Centre.

Crucially, Maria Merian’s paintings were in support of her own researches, rather than, as was so often the case, those of male contemporaries. Her particular interest was in the life-cycle of insects, especially butterflies, but not only that. One of her most famous illustrations (and not for the squeamish) is of leaf-cutter ants and a bird-eating spider (a tarantula, maybe Theraphosa blondi) happily tucking in. You get the feeling that Merian would have no problem retrieving little critters from the bathtub. 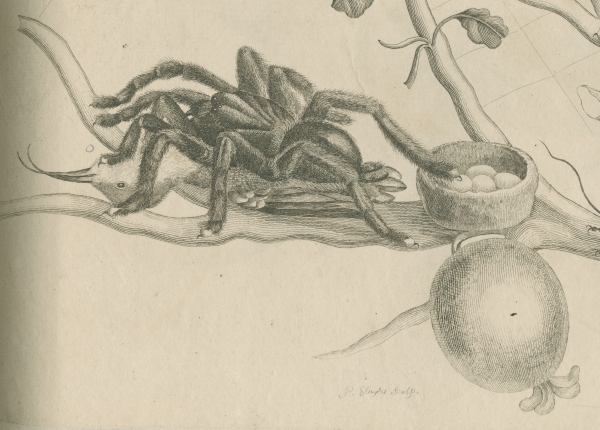 Maria Merian interacted with several key Dutch Fellows of the Royal Society, including Frederick Ruysch (1638-1731) and Nicolaes Witsen (1641-1717) during a sojourn near Amsterdam and the excitement of seeing exotic specimens coming through the port seems to have inspired her to undertake an expedition to Surinam in South America with one of her daughters. The resulting book, Metamorphosis insectorum Surinamensium (Amsterdam, 1705) can be seen in the Royal Society’s Library. It has the most breathtaking plates (including that spider) and must have impressed its owner, the collector and President Sir Hans Sloane (1660-1753), whose annotations it bears. When published, the book was advertised in Philosophical Transactions for May-June 1703, making Merian one of the very few women writers to be mentioned by the Society at that time.

Remarkably, some of Maria Merian’s insect specimens still survive. They formed part of the collection of the Frankfurt-based banker Johann Christian Gerning (1745-1802) who, in turn, passed them to the Museum Wiesbaden, where they can be seen today. But her activities seem to have inspired other women artists too. In Thomas Martyn’s book Psyche: figures of non descript lepidopterous insects, or rare moths and butterflies from different parts of the world (London, 1797), the very fine illustrations are made from Gerning’s collection and appear with the curious credit that 'under the immediate care and direction of this great collector, the original drawings of this publication were executed by the celebrated Mademoiselle Maria Hockecker…'. This must be the German painter Maria Eleonora Hochecker (1761-1834), who, inevitably, does not have a Wikipedia entry. Volunteers? 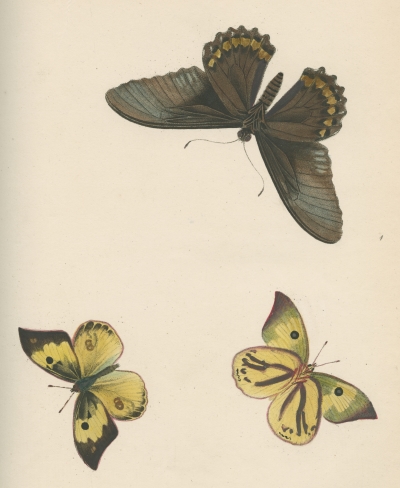