Keith Moore describes a fascinating research project which analyses wormholes in woodcuts made on printing blocks.

By surveying holed woodcuts in different editions of books, the paper’s author could deduce the ranges of European woodworm species, based upon where and when the block was printed.

This is getting ridiculous; I must stop writing about insects, it’s my third blog post in a row. One of my predecessors as Librarian, William Edward Shuckard (1803-1868) was actually fired by the Royal Society for being 'too interested in science' (I’m not making this up) which meant bankrupting himself by overspending on his bug collection. Please don’t think of me as an entomological obsessive, but I genuinely couldn’t resist after reading the latest batch of Biology Letters and a paper by S Blair Hedges, 'Wormholes record species history in space and time'.

I’m a sucker for useful and imaginative scientific work being produced from archival sources, as opposed to the more usual historical research, much as we love that too. If you want to know the sort of thing I mean, have a look at the History of Marine Animal Populations (HMAP). Here, a variety of marine biological projects try to exploit data from historical records (such as whaling logbooks or manuscript fisheries’ catches) to try to understand more about the changing populations of the seas.

There are lots of other areas where you can see the potential for long-chronology datasets in reviewing or supporting some aspect of contemporary science. Think of astronomical observations of sunspot activity, for example, or meteorological records in an era of climate change. But I confess I’d never imagined anyone would find much of a use for the varieties of pests that us curators monitor and lay down bug-traps for. Step up Penn State’s finest, analysing trace wormholes in woodcuts made on printing blocks from the 15th century onwards. Because the blocks wouldn’t ink up properly, the holes would leave visible round gaps, or ‘fossils’ on prints. 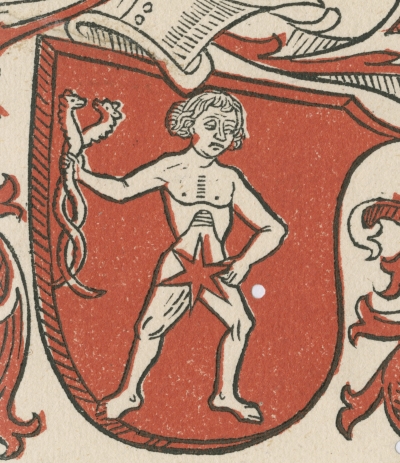 Here’s a conventional picture of worm damage in a cut from the Society’s copy of Cocordatia astronomie cu theologia, by Petrus de Alliaco, printed in Augsburg in 1490. The worried-looking gentleman holding the very apt intertwined serpents of the caduceus has a wormhole just to the right of his modesty-star. Frankly, I’d be worried too. But this damage is post-printing: in the paper, not in the original woodblock. Block wormholes are far harder to spot and I haven’t found one in our collections yet.

By surveying holed woodcuts in different editions of books, the paper’s author could deduce the ranges of European woodworm species, based upon where and when the block was printed. That sort of information is usually available on title pages of books. Where it isn’t, the worm type implicated in the holes (different variety, different hole size) might suggest a regional locality of printing. So the technique might be equally useful to both insect specialists and historians of the book, the paper suggests.

I’m simplifying what is a short but fascinating piece of work. Do read it. Now, does anyone have other examples of how historical materials can aid scientists? I’d love to know about them.