Rupert Baker responds to a census on Robert Boyle's 1661 book 'The Sceptical Chymist', and discovers some interesting facts about the copy in the Royal Society Library.

'Mr Boyle presented the society with the book, which he had published since the order was made, that every member, who should publish any book, should give one to the society’s library.'

'So, how many copies of this book were printed, then? How rare is it now? How much is it worth?' – all enquiries that feature highly on the FAQ lists of rare book librarians, though the answers aren’t necessarily so easy to find, as the printing and distribution history of older books is often obscured by the fog of time. Sometimes, though, you provide a snippet of information and receive a great deal more in return.

This happened to me recently when I was asked to contribute to a census of the extant copies of The Sceptical Chymist, a famous work by one of the Royal Society’s Founder Fellows, Robert Boyle. To digress for a moment, this isn’t the first time we’ve been asked for such census information: for example, we chipped in to an ongoing project on the first edition of Darwin’s On the Origin of Species, a much more recent book with a well-documented publication history (1250 printed, sold out on the first day!) but with questions remaining as to exactly how many copies still exist in public collections and private hands.

Newton’s Principia has also been ‘done’, and I sent some information on the two copies in our collection, with my background reading alerting me to a rather stunning rate of inflation in the sale price of first editions. And while our copy of Galileo’s Sidereus Nuncius is definitely legit – it came to us as part of the Arundel Library and is listed in our 1681 Bibliotheca Norfolciana catalogue – we contributed to a recent survey which appears to have revealed that some copies on the market are not as ‘original’ as their owners would like to believe – see this thread if you’re into bibliographical scholarship and sleuthing…

Anyway, digression over, and back to our Sceptical Chymist. The census of extant copies is being carried out by Greg Girolami, Professor of Chemistry at the University of Illinois, Urbana-Champaign, who has kindly encouraged me to quote from our email correspondence. We started by looking at the book’s provenance (how it came to be in the Royal Society’s collections), with a quick check in the Society’s first Journal Book revealing that the initial entry for the meeting of 28 August 1661 runs as follows:

'Mr Boyle presented the society with the book, which he had published since the order was made [on 28 May 1661], that every member, who should publish any book, should give one to the society’s library.'

Although the book is not named in the minutes, we concluded that it must be the Sceptical Chymist – this is known to have been published in August 1661, so the meeting in question would have been one of Boyle’s earliest opportunities to donate it to the Society. Boyle’s only other ‘new’ natural philosophical book that year, his Certain Physiological Essays, was published in March; there was also a Latin reprint of his 1660 work on air pump experiments, but this is mentioned by name as being presented a fortnight earlier at the meeting of 14 August. We can also rule out his 1661 Some Considerations Touching the Style of the Holy Scriptures – again, the dates don’t seem to tie in, and the donation of a religious treatise would be unlikely to grab such a ‘headline’ position in the minutes.

We then looked at various textual elements of the book, with Professor Girolami asking me in particular to take a look at page 244. In our copy, a sentence where Boyle discusses 'having made two sorts of Oyle out of the same mans blood that would not mingle with one another' (!) is repeated – a 17th century printing blooper, but one which makes our Sceptical Chymist that much rarer, as in around 75% of the extant copies examined, this page has been replaced by a later ‘cancel’ or replacement leaf.

What makes our copy stand out, though, would appear to be the variation in title page format. Other copies have one at the front with Boyle’s name and the date ‘MDCLXI’, and then a second, anonymous title page between pages 34 and 35; ours, however, has the anonymous one at the front and no second title page later. Quoting Professor Girolami at length:

'The lack in your copy of the title page bearing Boyle’s name and the MDCLXI date is also highly interesting.  As far as I know, your copy is unique in this respect. There has long been puzzlement about why two title pages, one anonymous and one with Boyle’s name, are present in essentially all known copies (there are a couple of other copies that have only one of the two title pages, but almost certainly by attrition). Your copy makes me wonder whether Boyle intended originally to publish it anonymously (which he did for several other books of his), but after the first copies were produced he decided otherwise and had a new sheet with his name added to the forme for the opening gathering.  But why the second title page was added to the first, rather than substituted for it, is unclear.' 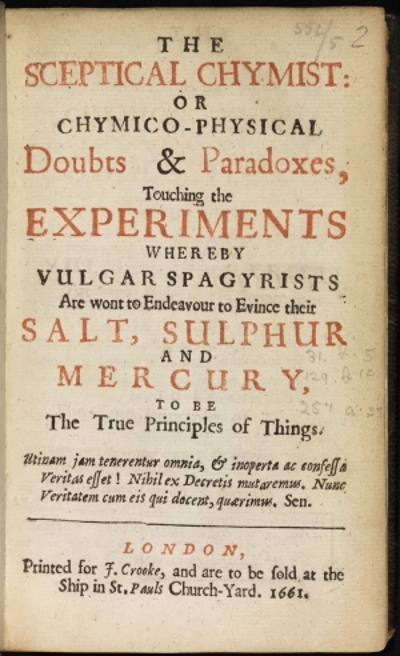 Interesting indeed! OK, maybe giving rise to more excitement among Boyle historians and rare book librarians than among your ‘everyday readers’, but I do feel that when we respond to this sort of enquiry, we’re helping to make a contribution to the study of the history of science – and that’s one of the main reasons we do what we do, after all – while also learning something useful about our own collections. And Professor Girolami’s conclusions also provide food for thought:

'You may be aware [I wasn’t – ed.] that the first edition of The Sceptical Chymist is quite scarce, and an earlier census conducted in 1960 found only 31 copies. As of today, I have definite information about the location of only 55 copies, with evidence of perhaps 10 more of unknown location from bookdealer and auction records. All in all, the book is far rarer than Copernicus’s De Revolutionibus, Galileo’s Dialogo and Newton’s Principia, for example. It seems to be at least as rare as Harvey’s De Motu Cordis, which is one of the ‘black tulips’ of science and medicine books.'

So, it seems we have a unique variant of a book that is pretty rare to begin with. I look forward to seeing the final results of Professor Girolami’s survey, and will treasure our Sceptical Chymist first edition even more from now on, and lean towards our 1965 facsimile reprint (of the later variant, with two title pages) for general use in the Royal Society Library!