Rupert Baker hunts for meteors, comets and asteroids in the archives of the Royal Society.

Nathaniel Pigott’s eyewitness description mentions “a ball, of so vivid a brightness, that the whole horizon was illuminated … It suggested the idea of a highly brilliant comet, emitting a train or tail…”

Well, today is certainly a lively day in the heavens, what with meteors over Russia and the close approach of asteroid 2012 DA14 this evening. These events sent me scurrying to our Picture Library to search for related images from our archives, and I thought I’d share this one with you: 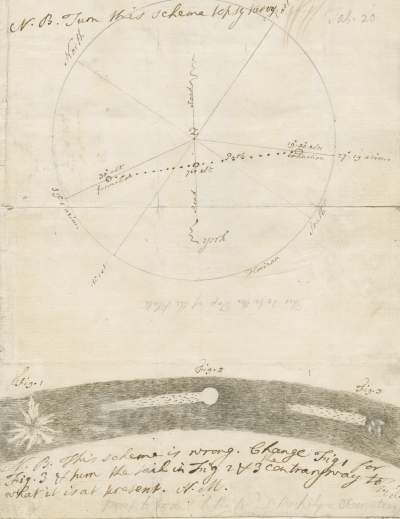 It’s an observation by Nathaniel Pigott FRS of a meteor over York in 1783, sent to Astronomer Royal Nevil Maskelyne FRS and subsequently published as this Philosophical Transactions article. While the ‘York meteor’ does not appear to have caused as much damage as those falling on Russia, Pigott’s eyewitness description is very similar to some of those I’ve been reading today: “a ball, of so vivid a brightness, that the whole horizon was illuminated … It suggested the idea of a highly brilliant comet, emitting a train or tail…”

Talking of comets, I’m looking forward to the appearance of Comet Ison later this year – though while I’m keeping my fingers crossed for another Hale-Bopp, or even better, I’m just about old enough to remember the damp squib that was Comet Kohoutek in 1973, so I realise that these things can go either way! Our Picture Library has provided me with this rather lovely image of Donati’s Comet in 1858, and I’m definitely hoping for a similar combination of St Paul’s Cathedral and Comet Ison: 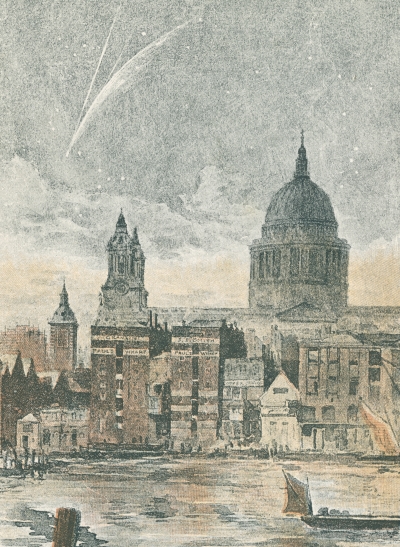 We haven’t yet added any asteroid images to the Picture Library, but a colleague has pointed me in the direction of this 1807 paper in the Phil Trans by William Herschel FRS. The ‘new celestial body’ in question was subsequently named Vesta, and is one of the largest objects in the asteroid belt. It was first spotted by Heinrich Wilhelm Olbers FRS, whose Royal Society Election Certificate notes his earlier discovery of the asteroid Pallas. There’s a connection here with our current Romantic Chemistry exhibition, in that the new heavenly body, which Olbers observed in March 1802, gave its name to the element palladium, discovered a year later by William Hyde Wollaston FRS.

We have some of Wollaston’s palladium samples in the exhibition, so do drop in to see them. And I hope this off-the-cuff blog post will give you an interesting set of links and images to keep you busy over the weekend – as long as we’ve all steered clear of celestial impacts, that is…