Don’t try this at home: scientific injuries in the Royal Society archives

The records of the Royal Society throw up surprisingly frequent instances of scientists subjecting themselves to the tortures of the damned in pursuit of new knowledge, as well as the occasional laboratory accident.

According to Joseph Banks, the experiment consisted of ‘put[ting] 2 blisters upon his back & to communicate these with his mouth Nose & Eyes by wyers that he might See taste & Smell Galvanism at the Same time in which he says he succeeded tho not without horrible pain which he sufferd like a True German.’

By which, of course, I mean records of injuries. Archives themselves tend to be fairly safe environments (although in some remote and older collections, which I probably shouldn’t name, I have found myself teetering at the top of a ladder and wondering how long it would take someone to find me if I fell.) Nevertheless, the records of the Royal Society throw up surprisingly frequent instances of scientists subjecting themselves to the tortures of the damned in pursuit of new knowledge, as well as the occasional laboratory accident. In no particular order, here are a few I’ve stumbled across recently:

1)   Charles Blagden and Joseph Banks – the protagonists of much of our recent research at the Publishing the Phil Trans project – entered rooms heated to very uncomfortable temperatures with a view to finding out what the human frame could stand, and to establishing the relative inefficiency of atmospheric air as a conductor of heat. Blagden wrote the results up for the 1775 volume of Phil Trans; accompanied by Daniel Solander and George Fordyce, they went into specially-heated chambers in which the mercury in the thermometer stood at various temperatures, for as long as they could tolerate it. Rooms heated to 125 or 130 Fahrenheit posed no great challenge, and they stayed in them for 20 minutes or more at a time; Banks, meanwhile, went solo into a room where the air temperature stood at 211 degrees (according to the only thermometer which hadn’t warped or cracked in the heat) and lasted seven minutes. Blagden’s manner of reporting the experiments protests perhaps a little too much in his willingness, indeed his eagerness, to hurt himself in the cause of science: “We all rejoiced”, he says, “at the opportunity of being convinced, by our own experience, of the wonderful power with which the animal body is endued, of resisting an heat vastly greater than its own temperature”. He did, however, go back for a second dose three months later, publishing a paper on these further experiments in the same volume.

2)   Almost anyone who did a science practical in school will remember the safety lectures; my science teacher added to the standard narrative about the careful use of bunsen burners and the wearing of lab coats and protective goggles at all times an anecdote about his own science teacher’s demonstration of the percussive detonation of gunpowder involving some gunpowder, a bench, a hammer, and a broken arm for the teacher. Joseph Louis Gay-Lussac, the great French chemist and discoverer of boron, would perhaps have benefited from some basic instruction on workplace health and safety. Writing from Paris in 1808 (the letter had to go in the American diplomatic bag to get around the interruption of normal communication between English and French scientists caused by the Napoleonic Wars), Richard Chenevix explained to Blagden why not much had been heard from Gay-Lussac lately: “In preparing his potash he threw a large quantity of it into some alcohol an explosion immediately took place and he has suffered dreadfully. For a long time his sight was dispaired of but there are hopes at present.”

3)   Gay-Lussac was later put in charge of the giant voltaic battery Napoleon ordered to be built at the Polytechnic Institute in Paris. (Legend has it that Napoleon, whose own ideas of lab safety could have done with a quick refresher course, almost knocked himself out by applying his tongue to one of the battery’s terminals in order to test it.) Volta himself, as well as Alexander von Humboldt, both reported deliberately subjecting themselves to electric shocks; in Humboldt’s case, according to Joseph Banks, the experiment consisted of ‘put[ting] 2 blisters upon his back & to communicate these with his mouth Nose & Eyes by wyers that he might See taste & Smell Galvanism at the Same time in which he says he succeeded tho not without horrible pain which he sufferd like a True German.’ Banks recommended the account to a friend whom he thought it would amuse. It’s not clear which Banks found funnier – Humboldt’s self-inflicted injuries, or his performance of Teutonic fortitude. 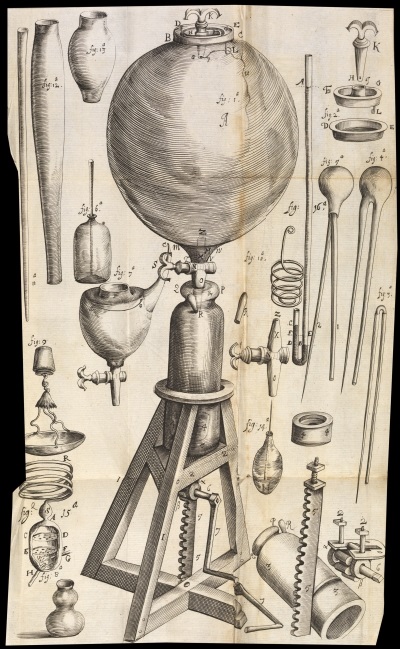 4)   No round-up of auto-experimentation in science would be complete without a mention of Robert Hooke. As well as a medical regimen, meticulously recorded in his diary, which was breathtaking in its variety and toxicity, Hooke subjected himself to the vacuum generated by the air pump he built for Robert Boyle. When the King’s cousin, Prince Rupert, attended a meeting of the Society in 1662, he was entertained with a demonstration of the air pump.  The need to put on a spectacular show for the royal guest was surely in everyone’s mind, and it’s been suggested that Hooke was very probably the unnamed man who thrust his arm into the exhausted receiver, which produced an immediate swelling, an enlargement of the veins in the arm almost to bursting point, and the speckling of burst capillaries when he eventually withdrew it.

Of course, there were particular experiments where volunteers were hard to find. We’ve already discussed the contentiousness and hysteria surrounding smallpox inoculation in the 1720s on this blog; another notable area of difficulty was blood transfusion. Hooke was also involved in these experiments in the 1660s, culminating in a successful transfusion from a live sheep into a penurious student named Arthur Coga.  This experiment was not soon repeated, but it gave rise to another notable scientific tradition – that of the student supplementing his income by participating in a clinical trial!